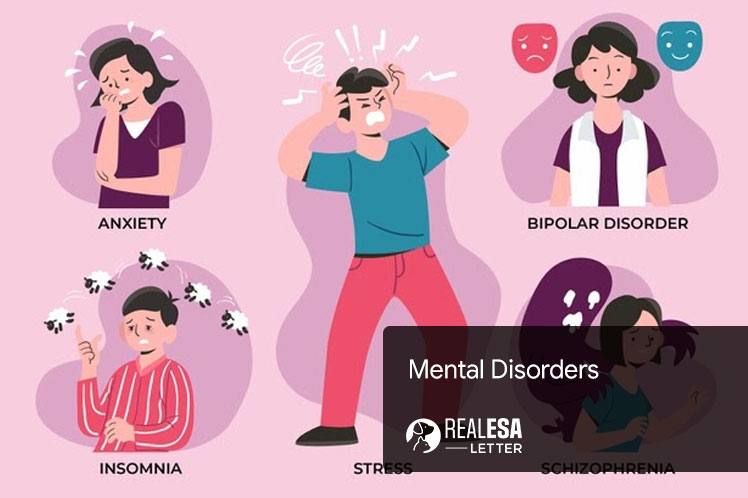 Mental disorders, also known as psychiatric disorders or mental illnesses, are conditions that affect your behavior, mood, feeling, and thinking.

In this blog, you’ll get to know about the different types of mental disorders, their causes, symptoms, and medication.

What is a Mental Health Disorder?

Mental disorder is generally characterized by a combination of behavior, emotions, feelings, abnormal thoughts, and relationships with others. They may be occasional or last-longing. They impact multiple areas of life, i.e., day-to-day function or ability to relate to others. They can create distress for the person experiencing the symptoms.

According to mental disorders definition:

“They are the mental health problems that affect how a person interacts with people, how he behaves and thinks.”

A mental disorder is usually associated with distress or problems functioning in the family, work, or social activities. They are a group of mental health conditions that are diagnosed with different criteria.

Diagnostic and Statistical Manual of Mental Disorders (DSM-5) states that mental disorders can happen due to several medical conditions. DSM is a handbook published by the American Psychological Association (APA) used by medical health professionals in the United States. This authoritative guide is used around the world for diagnosing mental disorders.

DSM provides the description of mental disorders, their causes, symptoms, and criteria for diagnosing the disorder. It guides the doctors on how to communicate with their patients and establish a reliable diagnosis. It also gives a platform for researchers to study potential future improvements that help develop medication. 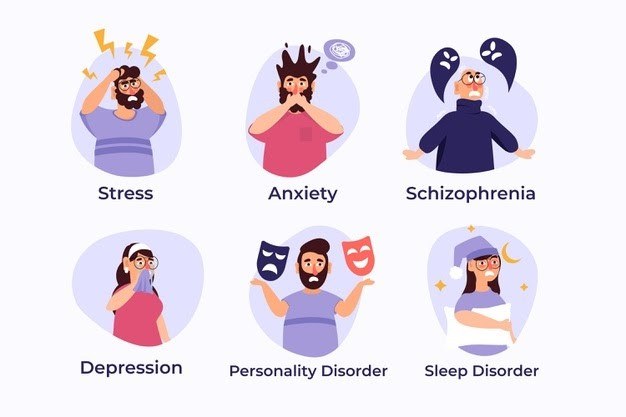 Mood disorders are usually known as affective disorders. They involve the feelings where the mood fluctuates from extreme happiness to extreme sadness. The following are common mood disorders:

Eating disorders are a complex mental health condition which is characterized by disruptive eating patterns. These disorders are commonly known as Winnie the pooh mental disorder. They negatively impact physical and psychological health. The following are some common eating disorders:

It is a mental illness in which a person has a rigid and unhealthy pattern of behavior, thinking, and functioning. The common types of personality disorders are:

Such disorders are the reaction to traumatic or stressful events. The following disorders are included in the stress-related disorder group:

It involves disturbed or interrupted patterns of sleep. Changes in sleeping patterns can negatively affect your health. Sleep disorder includes the following disorders.

Some other common mental disorders are listed below:

Mental disorder in children is characterized as a serious change in how they behave, learn. And handle their emotions, which cause distress and problems getting through the day. Many children show disruptive behavior, experience fear, and worries.

The most common mental disorder in children are:

Just like normal children, children with mental disorders need to be understood and appreciated for their talents and strengths. They are just like the normal kids in their need to belong to their friends, families, and other communities. However, they require some special services and support to succeed in life.

Children with mental disorders may need some extra guidance to perform better in an educational environment. They may need extra attention or social skill groups to help them be a part of social settings and make friends. The symptoms of mental disorders in children may change over time as they grow.

Symptoms of childhood mental disorder often start in early childhood, but some disorders may develop in the teenage years. The diagnosis is usually made in the school years or earlier. But, there are some cases when a child goes undiagnosed and recognized as having a mental health issue.

Furthermore, an early diagnosis and appropriate treatment can make a huge difference in a child’s life.

A major portion of people around the world has mental health concerns from time to time. But a usual problem can turn into a severe disorder if ongoing symptoms are experienced for a long period of time. A mental illness can make your life miserable and may cause problems in your daily life, i.e., at work.

However, mental disorder symptoms can vary, depending on the type of disorder, circumstances, and other factors. The common symptoms of mental illnesses include:

There are some cases when mental disorder symptoms appear as physical problems, i.e., headaches, back pain, stomach pain, etc. If you experience any of the symptoms for an extended period, you should consult a mental health professional.

There may be many causes of mental disorders, but the most common causes are only three. Generally, mental disorders are thought to be caused by a combination of genetics, environmental factors, and brain chemistry.

The national institute of mental health suggests that many factors lead to mental disorders. The right diagnosis of the disorder requires finding the correct cause of the problem.

There are several ways to treat mental disorders. No one treatment works for everyone. Everyone experiences different symptoms and has various causes that require different ways of treatment. For some people, one treatment may work best, and for others, a combination of treatments may be required.

However, here are some common mental disorder treatments: 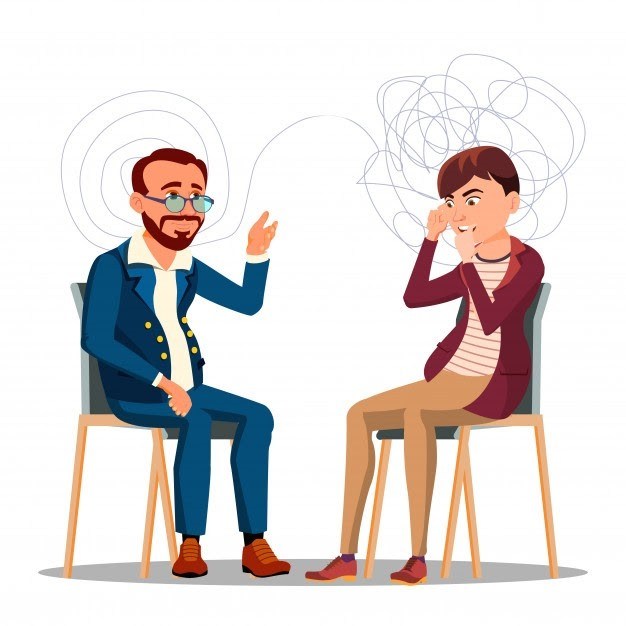 Therapy is always considered the first option for mental disorder treatment. It is a therapeutic treatment provided by a psychologist or psychiatrist. It explores a person’s thoughts, behavior, feelings, and seeks improvement for a person's well-being.

The common types of psychotherapies are exposure therapy, cognitive behavioral therapy, talk therapy, and dialectical behavior therapy. A combination of psychotherapy and medication gives the most effective results and shows speedy recovery.

Most of the people who are not comfortable with psychotherapy go for the medication option. There are some cases when medication is necessary to control the symptoms of the disorder. However, it does not outright cure mental disorders, but it can help in symptom management.

It is a group of people who have some mental disorder, get together and share their stories. People in these groups are usually non-professionals, but they have dealt with similar problems. In these group meetings, peers guide each other towards the shared goal of recovery. 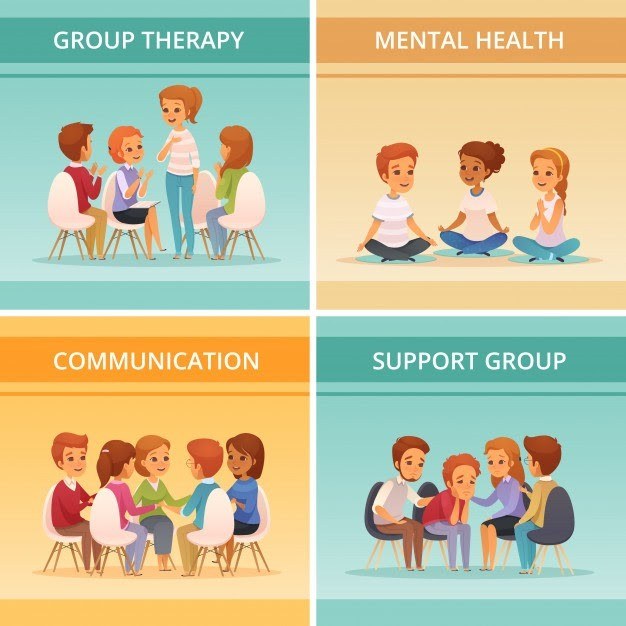 Self-help plans may include addressing warning signs, recovery, or wellness. These are the unique plans that are designed for individuals so that they can address their conditions and promote wellness. Peer support is getting help from people who have experienced the same problems. Peers guide how to manage the symptoms and promote health.

It is the last option when no other treatment works. When a mental disorder turns into a severe condition, then hospitalization becomes necessary. It is essential to monitor the patient closely so that the right diagnosis can be made. And, treatment plans can be adjusted when the conditions worsen.

To determine a diagnosis of mental disease and check for related complications, an individual may have to do the following tests:

Apart from seeking professional help, an emotional support animal (ESA) can also help a person experiencing any mental disorder. ESA can provide care and companionship to people having any mental or psychological problem. If you are looking for a valid emotional support animal letter, you can contact RealESALetter.com. You will get your ESA letter without any hassle.

What are the five most common mental disorders?

The five most common mental disorder are:

What is the hardest mental disorder to live with?

As defined by the National Institute of Health (NIH), Borderline Personality Disorder (BPD) is considered the most common mental disorder to live with. It is a severe mental illness categorized by ongoing instability in mood, self-image, behavior, and functioning.

What is the weirdest mental disorder?

Here are the five weirdest mental disorders that you might have never heard of:

What is a psychotic break?

A psychotic break means losing contact with reality, such as smelling, tasting, seeing, hearing, and feeling something that has no external correlation. It is also characterized by hallucination, delusion, and feeling emotions wildly inconsistent with external reality.

What is the easiest illness to treat?

All types of phobias are the easiest psychological disorder to treat. Specific phobia includes intense, irrational fear and avoidance of certain situations and objects such as stage performance, heights, etc.

What is stage 4 mental illness?

By stage 4, mental illness reaches its severe condition due to persistent, prolonged, and extreme symptoms. At this stage, an individual’s daily life will be disturbed to an extreme level that turns into homelessness, hospitalization, unemployment, or even incarceration.

What should you not say to a mentally ill person?

Here are the five things that you should never say to a person experiencing a mental disorder:

What is worse bipolar or schizophrenia?

Schizophrenia is worse than bipolar as it causes more severe symptoms than bipolar. Symptoms of schizophrenia include delusion, hallucination which make people's lives worse and disturb daily functioning.