What is Depression & How it Can be Treated?

Home » Blog » Mental Disorders » What is Depression & How it Can be Treated? 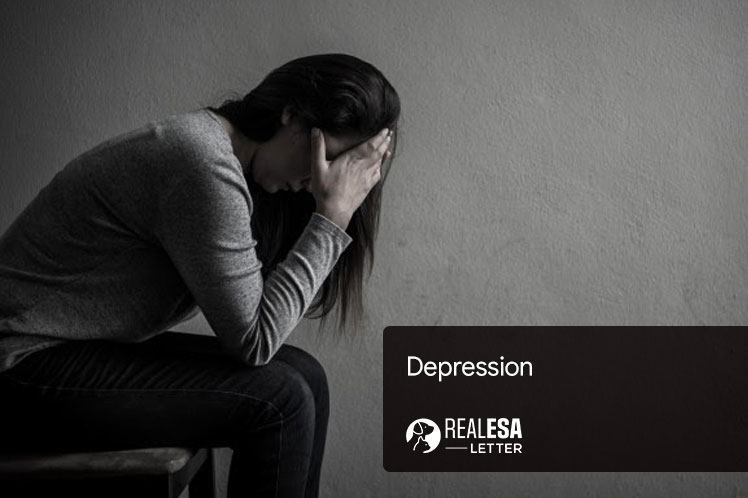 Depression is a common mood disorder that creates a feeling of sadness, anger, or loss of interest. It affects how you feel and the way you behave.

The most common form of depression is major depressive disorder or clinical depression.

Nowadays, depression is one of the most common and serious mental disorders that can lead to various physical and emotional problems. It affects your ability to perform day to day functions as well.

A person may need long-term treatment, but many people feel better with simple medication or psychotherapy. In this article, learn about the main causes of depression and how it can be treated. We have also included types, risk factors, and more.

Depression is a common mental health disorder worldwide. It can affect children, adolescents, and adults. Depression is very different from usual mood swings and short-timed emotional responses to challenges in day to day life.

It may become a serious health condition with long and severe emotional responses. It can greatly affect a person’s personal as well as work life.

Depression can also be the main reason for suicide. Nearly 800,000 people die every year due to suicide. Suicide is becoming a leading cause of death among youngsters of age 15-30 years.

There are various effective methods for treating people with mental disorders. Around 75% to 85% of people in low-income countries receive little to no medical treatment for such disorders. Lack of resources, trained health professionals, and inaccurate assessment are some of the main reasons for this.

The feeling of sadness or grief is normal that develops in response to certain situations. These include loss of a job, death of a family member, ending of a relationship, etc. Those experiencing these feelings are often described as being depressed.

But being sad is not the same as being depressed. Feeling sad in such situations is natural and somehow shares the same features as in depression. Both sadness and depression involve some intense sadness and the person also faces difficulty doing daily activities.

Depression and grief/sadness differ in the following ways.

Grief and depression can co-exist. A person suffering from both may have severe symptoms that may last longer.

Depression can be categorized into two broad categories depending upon the symptoms. Both these major types of depression can be chronic if they are not properly diagnosed and treated well. 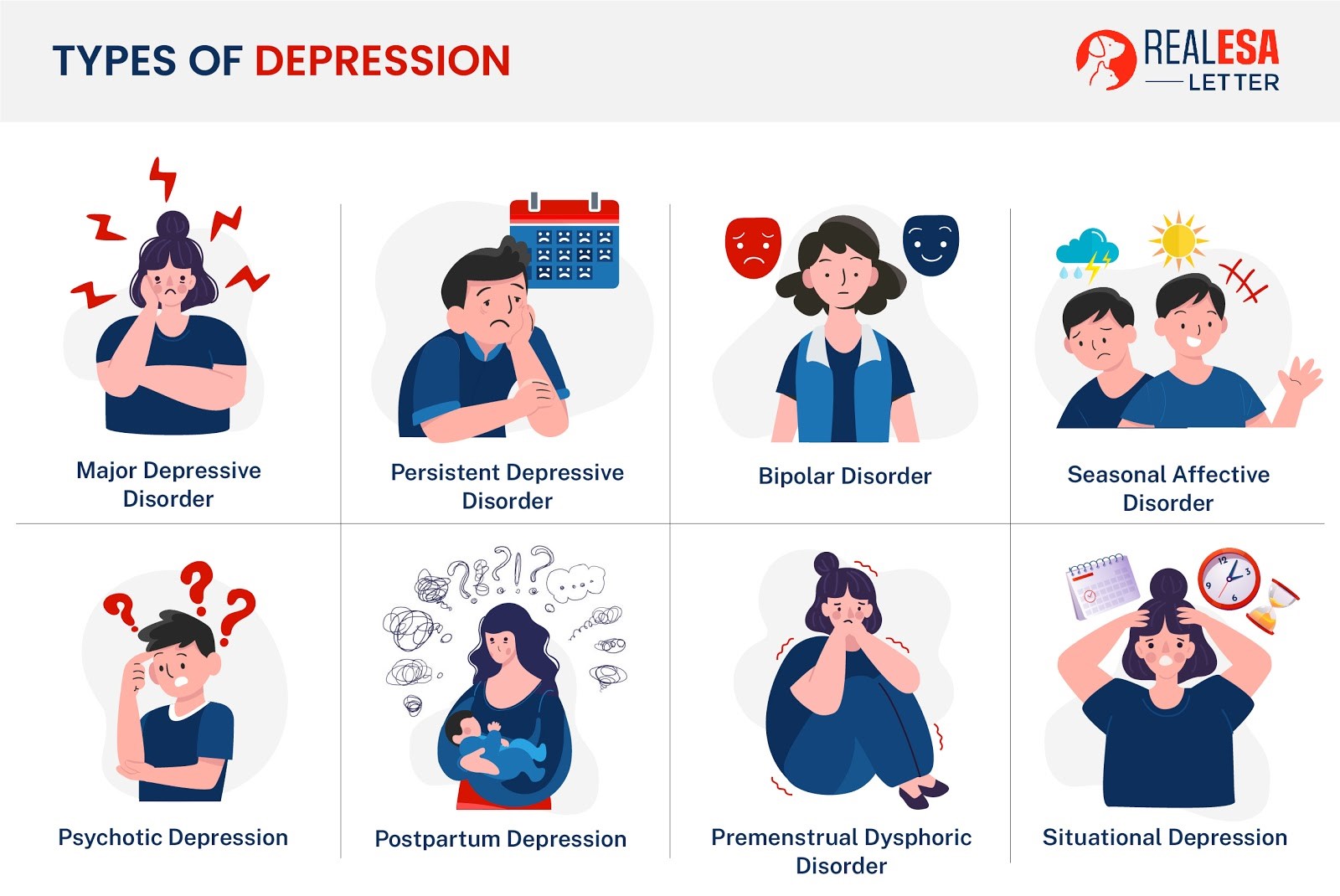 Major depressive disorder is one of the main and severe forms of depression. It causes a feeling of sadness, worthlessness, and hopelessness that don’t disappear on their own and need proper treatment.

A major depressive disorder is further categorized into different subtypes referred to as specifiers as defined by the American psychiatric association. These includes:

Bipolar depression is also called manic depression. Someone suffering from bipolar disorder has episodes that can range from high energy moods to low and long-lasting depressive periods.

The symptoms of bipolar depression are quite the same as in major depressive order.

SAD is a period of major depressive disorder that usually happens in the winter season when the days are short. A mild seasonal affective disorder typically goes away in summer.

People suffering from psychotic depression share the same symptoms as a major depressive disorder. Other symptoms include:

Antipsychotic drugs and antidepressants are used to treat psychotic depression. ECT (Electroconvulsive therapy) is also a good option to be used.

Women with premenstrual dysphoric disorder may have depression and other similar symptoms at the starting days of their period. Other than the usual symptoms of depression, you may have the following symptoms.

As the name says - people can have situational depression when they are unable to manage certain situations in their life. This can be about losing your job, losing someone in your family, etc.

Doctors also call situational depression a stress response syndrome. Psychotherapy is very effective to get people through depression related to any stressful event or situation.

Any kind of depression can be treated if it is properly diagnosed and the patient sticks to the treatment plan.

Depression of any kind varies according to gender and age groups. The symptoms of depression are different in men, women, and teens.

The major symptoms of depression in teens are irritability, agitation, and anger. Other than these, depressed teens may also complain of stomach ache, headache, or any other physical pain.

Men with depression are less likely to have feelings of hopelessness and self-loathing. Instead, they usually complain about irritability, fatigue, irregular sleep, and loss of interest. Depressed men are most likely to have symptoms such as aggression, anger, and reckless behavior.

Depressed women are likely to have symptoms such as feelings of guilt, overeating, excessive sleeping, and weight gain. Hormonal changes during menstruation, menopause, and pregnancy are also one of the main factors of depression in women. In fact, 1 in 7 women experiences postpartum depression during the time of pregnancy.

Adults are more likely to experience physical pain. They show fewer emotional signs and symptoms of depression. They simply stop taking care of themselves by neglecting their personal appearance and not taking medications on time.

There are many possible causes of depression ranging from biological causes to circumstantial. Here are the most common causes that can lead to depression.

Unfortunately, there is not a single test for diagnosing depression. But your doctor can make a diagnosis after evaluating your symptoms and psychological behavior.

Usually, the doctor asks a number of questions about the following factors.

Your doctor may also conduct a physical examination because depression can be linked to other health problems. Sometimes the deficiency of vitamin D and thyroid problems can also be the reason for the early signs of depression.

Do not ignore the signs of depression because if it is not treated the individual may face many complications in life. So, if your mood gets worse and does not improve, seek medical help immediately.

Depression is the most common mental health disorder. People can develop depression at any stage of their life. More women are diagnosed with depression as compared to men this is because women are likely to seek treatment.

The following are the main factors that can trigger depression other than the common causes.

Depression is a serious mental illness that can negatively affect not only the person but also his/her entire family. It often gets worse if not diagnosed on time and treated well. It often results in behavioral, emotional, and health-related problems that affect all areas of your life.

The major complication of depression includes:

It is not easy to handle depression but proper treatment can help you improve your life. You can talk to your doctor and see what are the possible options that can help you in treating depression.

The following treatments can be used in order to treat depression.

Your doctor may provide you with the following medications.

Each type of medication you use to treat depression has its own benefits as well as side effects.

Exposure to white light from time to time can also help in regulating your mood. It also lessens the symptoms of depression. Light therapy is one of the most common treatments usually used in treating seasonal affective disorder. It is now called major depression with seasonal patterns.

Other Treatments for Depression

These are the ways that can also help in treating depression other than the regular treatment.

Indulge yourself in a 20-30 minutes regular physical activity. Physical exercise can help in increasing the production of endorphins. Endorphin is a hormone that improves your mood.

The feeling of overwhelmedness can also worsen the symptoms of depression. You should set a boundary with your personal and professional life in order to feel better.

Take Good Care of Yourself

You can also treat depression by taking good care of yourself. Work on yourself and this includes getting the required amount of sleep, a healthy diet, and taking part in enjoyable activities.

One of the most recent treatments of depression is emotional support animals. This is because animals can improve our moods and make us feel better by just being there.

The most common animal used for treating depression is a dog although other animals have also been shown effective.

An emotional support animal can be beneficial for various reasons especially for those having the symptoms of depression. The ESA’s are specifically important for improving the quality of life. These animals offer safe companionship and unconditional love.

If you believe that the ESA can help you in treating depression, ask for an ESA letter by contacting us.

See if you can qualify for an ESA.