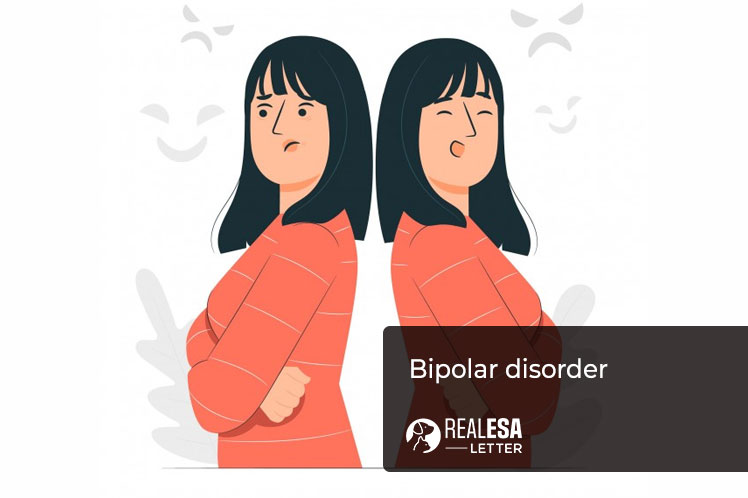 Bipolar disorder is one of the most common mental disorders that causes extreme changes in moods. It is a very serious mental condition that can cause risky behavior and even be the reason for suicidal thoughts.

People with bipolar disorder may feel sometimes overly happy and in other periods may feel very sad and hopeless. They usually feel normal in between those happy and sad time periods.

And why is it called bipolar? You can think of the high and low as the two poles of the mood. The term manic describes the period in which a person with bipolar disorder feels very excited and confident. Many people during mania can also experience delusions or hallucinations.

Bipolar disorder causes extreme mood swings. This condition includes emotional highs and lows. When depressed you may feel sad or helpless and may also lose interest in day-to-day activities.

People with this mental condition experience high and low moods which are referred to as ‘Mania’ and ‘Depression’.

When your mood shifts to mania, you may feel overly excited and sometimes irritable. These changes in moods can disturb your sleep pattern and affect energy, behavior, and also thinking ability.

Although bipolar disorder is a long-lasting condition. But the changes in mood can be managed through a proper treatment plan.

The root cause of bipolar disorder is not known but scientists confirm that it has a genetic component.

Some studies also suggest that there are many factors that contribute to producing abnormal function of brain cells. These results in the symptoms of bipolar disorder. Examples of environmental factors are stress, alcohol intake, and lack of sleep. 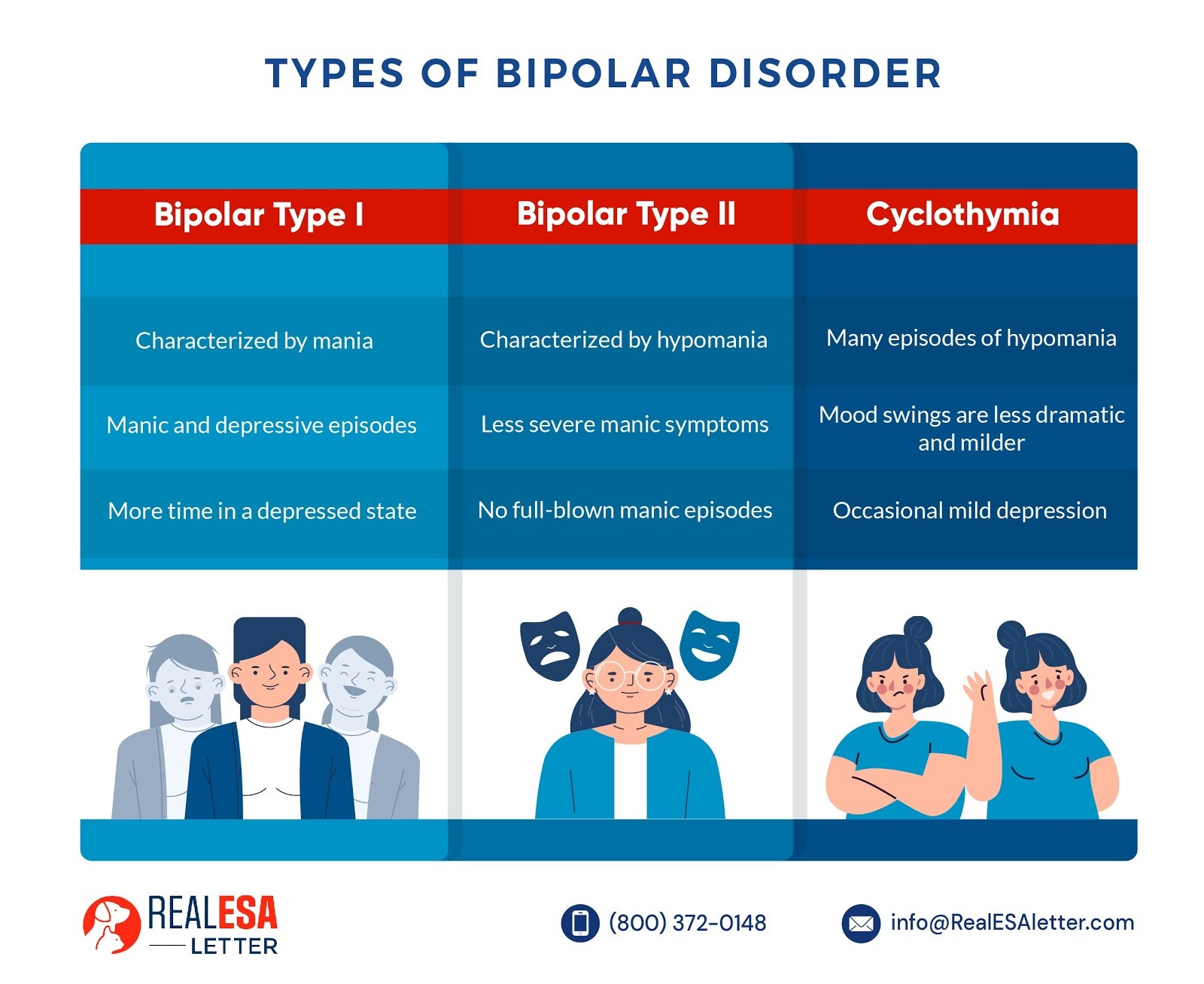 There are several types of bipolar disorder. All types involve changes in moods, thoughts, and energy levels.

In bipolar I disorder, people may experience more manic episodes. It may be followed by episodes of mania or major depression. To be diagnosed with this condition, manic episodes must last at least 7 days. Bipolar disorder I affect women and men equally.

It is about the patterns of hypomanic and depressive episodes. It does not include the full manic episodes typical of Bipolar disorder I.

People with bipolar disorder II also have at least one episode of hypomanic that can last about 4 days. Bipolar II disorder is more common in women than men.

There is also a possibility that a person may experience symptoms that do not match the above types. These are known as ‘Other Specified and Unspecified Bipolar Disorder.’

Typically, Bipolar disorder is diagnosed in the teen years or in early adulthood. Although the symptoms may change over time, they usually needed lifelong treatment. But following a proper treatment plan can help in managing the symptoms of bipolar disorder.

Bipolar is a common but serious mental health disorder. But to find the exact cause is still a mystery to researchers and doctors. It is still not clear why some people develop this condition while others do not.

The possible causes of bipolar disorder are mentioned below.

Severe symptoms include delusions or hallucinations. Usually, these psychotic symptoms show the extreme mood of the person. People suffering from bipolar disorder who show extreme psychotic symptoms are sometimes wrongly diagnosed as having schizophrenia. It is a complex, long-term mental illness.

Both genders may experience common symptoms of bipolar disorder. However, some symptoms in men are different than in women.

Men and women who are diagnosed with bipolar disorder are the same in numbers. However, the symptoms may differ between men and women.

Women are more likely to seek medical treatment for bipolar disorder and they are also less likely to die by suicide.

There is not a specific test for diagnosing bipolar disorder. Instead, the doctor may use one or a combination of the following tests and exams.

Your mental health provider will do a proper physical examination. This may also include blood and urine tests in order to find out the possible causes of such symptoms.

Your doctor may also recommend you to consult with a medical health professional such as a psychiatrist or psychologist. They help in diagnosing and treating problems related to mental health. They will then evaluate your condition and look for symptoms of bipolar disorder.

Your doctor may ask you to create a mood chart if your behavioral changes are because of bipolar disorder. The best way to do this is to keep a journal to make a record of how you are feeling.

The Diagnostic and Statistical Manual of Mental Disorders outlines the symptoms of various mental health problems. Doctors can also refer to this list to confirm the symptoms of bipolar disorder.

In addition to these, doctors can also use other tests and tools in order to diagnose bipolar disorder.

The following are several treatments that can be used to manage bipolar disorder.

The recommended medication for bipolar disorder generally include:

Psychotherapy is also one of the most effective ways of treating bipolar disorder. It is also called ‘Talk Therapy’ that aims to help a person recognize and change troubling emotions. It can also provide the needed help and guidance to people struggling with bipolar disorder. Cognitive-behavioral therapy and Psychoeducation are used in managing various conditions.

Newer treatments are also coming for the treatment of Bipolar disorder. It includes Family-Focused Therapy and Interpersonal and Social Rhythm Therapy (IPSRT).

Identifying whether intensive psychotherapeutic intervention at the beginning of bipolar disorder can limit the extreme episodes is the key part of the ongoing research.

Another treatment that is useful in managing the symptoms of bipolar disorder is electroconvulsive therapy. It is basically a brain simulation procedure that helps people relieve severe bipolar disorder symptoms.

In ECT, a person with bipolar disorder goes through a number of treatment sessions. ECT is completely safe and delivered under anesthesia. It is an effective way to treat severe manic and depressive episodes that occur when a person does not show any progress with general medication and psychotherapy.

Another treatment is Transcranial Magnetic Stimulation (TMS) but more research is needed in order to determine its effectiveness.

It is relatively a new approach that utilizes magnetic waves. It is delivered to an awake person most days in a month. A recent study shows that this treatment is very helpful with various subtypes of depressive episodes. But its main role in treating bipolar disorder is under study.

It is important for the doctor to know about all the prescribed drugs, supplements, and medications a person is taking. Keep in mind that certain medications and supplements used in combination can cause unwanted effects.

Things You Can do Beyond Treatment

There are certain things other than general treatment that prove to be effective in treating the symptoms of bipolar symptoms.

Anaerobic exercises such as yoga, pilates, and weightlifting can also be helpful. Make sure to consult with your mental health professional before you start any new exercise.

Mood changes can occur even if you are following a proper treatment plan. Treatment is more effective when both a patient and doctor work together in treating bipolar disorder symptoms.

A life chart to keep a record of daily mood, daily activities, and sleep patterns. It can help a patient and doctor track bipolar disorder over time. It is also easy for patients to share data with their doctors through smartphone apps.

A pert can also be a huge help in soothing the symptoms of bipolar disorder. Medical specialists say that pets are of great benefit for people with serious mental illness. They can help build a sense of self-worth and confidence in people with these mental conditions. An emotional support animal is one such animal that provides comfort to people with any kind of mental disorder.

Animals are quick in recognizing the changes in human behavior. They provide ease and companionship during the hard times. They encourage people to interact with the outside world and provide opportunities to socialize and participate in physical activities. This can eventually lead to the production of endorphins - chemicals produced by the body to relieve stress and pain.

See if you can qualify for ESA.

Can bipolar people tell they are bipolar?

Is bipolar worse than depression?

A recent study shows that bipolar is much worse than depression. People with bipolar disorder are much worse at handling both happy and sad emotions than those suffering from depression.

Does Bipolar worsen with age?

Some people with bipolar disorder might also have psychotic symptoms. These include delusions and visual hallucination. People may hear voices in their extreme manic and depressive episodes.

What is the best job for a bipolar person?

People with bipolar disorder may do their best in a quiet and less stressful workplace where they can easily concentrate. Jobs with flexible work timings are also a good option. If you are suffering from bipolar disorder and looking for a job, you need to think about the: