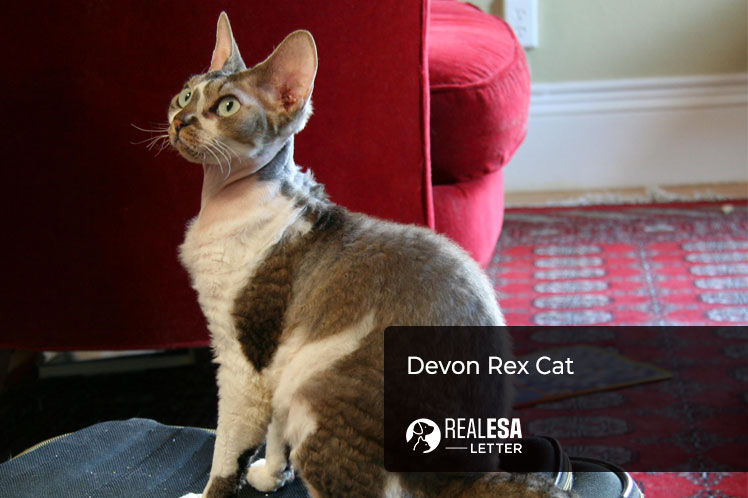 These include high cheekbones, long legs, slender and fine-boned bodies, and an unusual and unique hairstyle.

Their hair is curly but it is unlike that of a Cornish Rex. As per the folklore, these cats have pixie-like personalities also. Pixies are known to be quite naughty and these cats are no different. They are highly intelligent.

However, when adopting a cat, get one from a reputable breeder only.

They are highly active and very intelligent also. They love to be around you and once you bring one of these fellows home, expect him to be everywhere around you.

These cats make excellent pets and emotional support animals and you can also check other cat breeds to see which one would make an ideal match for your household.

Read the blog to know more about this unique and mischievous cat.

Origins - How Did these Cats Originate and Come into Being?

Their history is quite similar to that of their distant relative, the Cornish Rex, as, like them, they came into being as a ‘natural accident’. It all goes back to 1960; a feral tom used to live near an abandoned tin mine near Buckfastleigh, which is a small town in Devon, England.

The county is situated in southwest England.

The curly-coated tom mated with a straight coated cat, resulting in the uniquely curly-coated kittens. These kittens were born in the garden of Beryl Cox, who was an avid cat lover. Of the litter, a kitten named Kirlee was a curly coat and haired kitten.

Kirlee was a brownish-black tom and he had the same wavy coat as his father.

The place where all this happened was nearby Cornwall, which is the birthplace of Cornish Rex cat. Due to this, at first, Cox thought that Kirlee is a Cornish Rex and, to breed the Devon Rex, she tried to breed Kirlee with Cornish Rex cats to get the same kind of litter.

However, it did not work and each time, the result was litters of straight hair.

Upon seeing this, Cox and other breeders concluded that since the Devon Rex gene is a recessive gene, the kittens must have it from both of their parents. To put it simply, Kirlee’s feral father was also the father of Kirlee’s mother. The name of the breed was adopted.

The name was decided based on Kirlee’s birthplace, Devonshire, and a hint to the rex rabbit who has the same kind of curly coat.

Size and Physical Attributes of a Devon Rex Cat

The cat has a unique appearance and large eyes, huge ears, set low on the head, high cheekbones, and a short muzzle give an elfin-like look to the breed. These cats are medium in size and their frame and structure are also medium and finely made.

The cat is covered with fine-textured, soft, and wavy fur. They have down and guard hair, which gives them a distinctly loosely curled coat.

The fur is quite unique and it is unlike that of Cornish Rex. It is a result of a natural mutation and no other breed has such a coat. You can learn more about the Cornish Rex cat in a detailed breed profile and guide.

These cats are very curious and lively, and they like to know what is happening around them.

The point score for the breed is given below.

According to the Cat Fanciers’ Association, below is the accepted breed standard.

The whiskers and eyebrows of these cats also curl and sometimes, they are entirely missing.

For a complete breed standard and to know more about the cat’s variations of color, visit and check the Cat Fanciers’ Association’s Devon Rex breed standard.

Devon Rex is an active, alert, curious, and energetic breed. Just like their appearance, elf-like, they have the same elf-like personality also. They are very funny and having one at home means that there will be no dull moment.

Due to their large ears and eyes, these cats are often compared with elves, pixies, and aliens.

They are also known as ‘poodle cats’ and the people having them at home know how playful and cheerful these felines are. Unlike the usual cat-like personality, these felines love to be around people as following their favorite person around the house is their favorite activity.

Having short fur, these cats make ideal snuggle partners, and they do not mind the hugs at all.

Something that sets these cats apart from other breeds is their loyalty, devotion, courageous personality, intelligence, and playful nature. These cats love to perch on their owners’ shoulders and sit in their laps.

They are very curious and they want to know everything about what you are doing. They do not like to run around a lot but they love to learn new tricks, play with interactive toys, and be by your side all the time.

They love to sample everything you cook in the house and being a foodie, he could put on weight really quick. However, to make sure that he stays healthy and with you for a longer time, keep an eye on his food intake and do not let him snack every now and then.

He likes to sleep in warm places, under the covers, preferably, and would welcome you every day from work.

Health Concerns - How Healthy is a Devon Rex Cat?

All cat breeds are prone to health issues and diseases. This includes both pedigreed and mixed-breed cats. Devon Rex cats are also usually healthy but they are prone to a number of diseases.

This does not mean that you Devon Rex will get all or any of these diseases for sure but knowing about them will help you decide whether you want one of these felines or not.

Below are some of such diseases.

Keeping a close check on your cat’s health will be helpful in bettering his overall health condition and keeping him out of trouble.

Care and Grooming - How to Care for Your Devon Rex Cat?

The Devon Rex’s curly and short coat is easy to manage and handle. When grooming, be gentle as the hair is soft and could break easily. Many times, you will not need a brush, you can just finger brush your cat’s fur and this is all that it needs.

These cats do not shed a lot and even when they do, you will not see much of the fur sitting on your clothes, bedding, and furniture. These cats need occasional baths and unless your cat is white in color, they do not get dirty easily and quickly.

After the bath, their coat dries rather quickly. To bathe him, get a high-quality cat shampoo, and do not use your own shampoo for it.

Check the ears carefully and make sure that they are clean and free from any kind of redness, bad odor, and infection. If dirty, clean them with a cotton ball and a mixture of 50:50 warm water and apple cider vinegar. Do not use cotton swabs as they could damage the cat’s inside ears.

Like all cats, these felines are also very particular about their bathroom hygiene. Clean the litter box regularly and keep it clean and free from any bad smell.

Blame it on their short fur, these cats are nearly always cold. Buy him a nice cat sweater or keep him warped in a blanket when it is cold outside. Do not let your feline roam around in the neighborhood and mingle with stray cats.

This will keep him protected against diseases, fights, and possible theft. Build him a nice and big house so that he could sunbathe outdoors with the entire family.

To bring one home as your ESA, fill the online questionnaire and get a valid ESA letter first.

Liked the Devon Rex cat? Read about other cats also.

How much does a Devon Rex cat cost?

Between $600 to $1,000. These cats are quite unique and this is why they cost relatively higher than other cats.

What is the life expectancy of a Devon Rex cat?

Between 10 to 15 years. Some of these cats could even reach 20 years of age. It depends on the cat’s health conditions also and healthy cats tend to have quite a long lifespan.

Is the Devon Rex hypoallergenic?

Yes, these felines make excellent pets and emotional support animals. They are great for families with older kids, multi-pet households, and families who like to have guests around. They are very smart and they make great therapy animals.

Can Devon Rex be left alone?

What is the difference between a Devon Rex and a Cornish Rex?

The main difference between the two cats is the type of their coat. Cornish Rex has tighter curls than Devon Rex and when seeing both of them together, the difference is quite obvious and visible.

Do Devon Rex cats get along with dogs?

Yes, if introduced in the right way, they get along very well with friendly dogs. Due to their open, friendly, and outgoing personality, they make excellent house animals for families with kids and other pets. However, it is important that you introduce them properly.