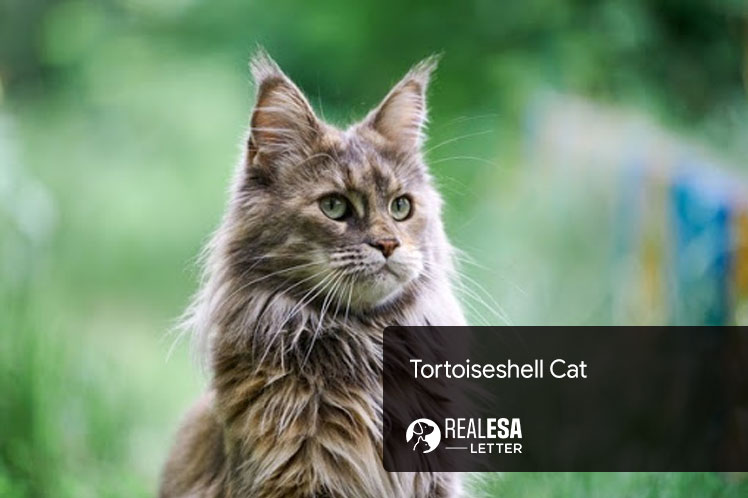 Tortoiseshell Cat is a beautiful and a particular kind of cat that is an exclusively female breed like Calicos. This cat is known for its beauty and uniqueness and the fact that its colors resemble those of tortoise.

These cats hide interesting and surprising facts under their multicolor fur that will blow your mind for sure. Although they are famous for their intriguing looks, Tortoiseshell cats can be extremely loyal and loving friends of humans and other animals.

Continue reading the article to learn the Tortoiseshell cat’s history, genetics, and other interesting facts.

People trace the history of Tortoise Cats back to ancient times. Southeast Asian folklore stated that the Tortoiseshell cats are very reputable as they were developed from the young goddess’s blood.

Because of their divine origination, Tortoise cats are perceived to bring good luck into human lives. With the evolution of time, these beliefs changed, but in some parts of the world like Scotland and Ireland, these cats are a sign of good luck.

While in the United States, these cats are said to be “money cats” as they bring financial stability to the families who own them.

Tortoiseshell cats have a strong and vibrant history. They are a result of the intricate genetic pattern that is observed in female cats. The several myths and other associations of this cat breed have always put them in the limelight.

The name of this breed often confuses people. The Tortoiseshell is not a specific breed. Instead, it is named tortoiseshell because of the fur’s color patterns and can be found in any domestic cat breed. Traditionally these cats have mixed black, brown, red, and orange color fur.

There are variations in this breed’s genetics, which result in different color patterns and types of Tortoiseshell cats.

Tortoiseshell can appear in different cat breeds. Whether the cat breed is pure or mixed can produce tortoiseshell coat in long or short hair. Following are some of the types of cat breeds that develop tortoise color patterns and designs.

Similar to its personality, a Tortoiseshell cat has unique genetics. The primary color of the cat is usually determined by the main coat color gene. A Tortoiseshell pattern is a result of two co-dominant genes. In bi-color tortie cats, the two genes come together to develop the characteristic brindled tortoiseshell pattern.

While in dilute torties, the two basic genes are modified with another recessive gene, which results in relatively lighter colors.

The Tortoiseshell cats are a female dominant breed. It is because the females have both the X chromosomes that are required to develop black, orange, and gold coloring. On the other hand, it is genetically impossible for a male cat to inherit a tortoiseshell pattern as ther is one X and one Y chromosome in their genes.

What makes these cats unique is that they have a tabby pattern on one of their colors. Tabby cats, also known as tiger cats, drive this gene that forms different designs, including lines, dots, swirl, and stripes.

The stunning patterns and color shading of the Tortoiseshell cat make it unique and breathtaking. Because of the resemblance of the cat’s fur to a mottled shell, it is called a tortoiseshell.

There are a variety of colors present in the Tortoiseshell cat’s fur. It is usually a blend of black or chocolate shade with a hint of ginger, red, and orange hair. Depending on the breed, the length of the hair can be longer or shorter.

The torties can also have white spots on their fur but the black and red color dominate. The cats with black and brown color fur with orange tabby markings and strips are known as a torbie. In contrast, the cats that have white hair with orange and black patches are called Calico cats.

The Tortoiseshell cats are not only famous for their beauty but their attitude as well. People who get to live with tortoiseshell cats often share stories of their “tortitude.” It is commonly believed that Torties have distinct attitudes and personalities. They usually have their own voice.

According to a UC Davis Veterinary Medical Teaching Hospital study, Tortoiseshell cats do have “attitude” issues. However, other animal experts have a contradictory opinion on this matter, and they believe that tortoiseshell cats are like ordinary domestic cats.

People’s experiences state that Tortoiseshell cats are more dominant and louder than other domestic cats. They can go from needing your attention the most to not wanting to get bothered in the blink of the eye.

However, they are as friendly and loving as other ordinary cats and make wonderful pets. It is totally safe to keep your children around them as they are incredibly affectionate.

As Tortoiseshell cats have distinctive features, unique personalities, and exciting myths, people often have different questions regarding them. Following are some commonly asked questions about Tortoiseshell Cat.

There are some commonly known facts about Tortoiseshell cats, such as they are females, they are not a breed, and they are like any other domestic cat. However, there are some hidden facts about this cat that common people are not familiar with.

Tortoiseshell are gorgeous and fierce cats that are amazing to be around and play with. Apart from being a good company and pet, these can be a great emotional support cat as well. The cat’s purr and its soothing vibes help people calm down in situations when it is needed the most.

Any person suffering from serious mental health problems can get his condition treated with the help of the emotional support of his cat. Although it depends on the breed, tortoiseshell cats are generally very affectionate making them perfect support of the patient.

Getting a Tortoiseshell cat as an emotional support animal is not difficult. You just require a letter from a mental health expert stating your need for this animal’s support. Make sure to get a legit ESA letter from a professional to enjoy all the rights provided by the state.

RealESALetter.com is a legit website that helps you connect with the right pet for your mental treatment as health experts analyze you thoroughly. Visit the website to check if you qualify to get a Tortoiseshell cat.

Although Tortoiseshell cats are mostly female, there have been records of male cats as well that is caused by a genetic mutation. These male cats are known to be sterile and have several health issues throughout their lives.

Tortoiseshell are breathtakingly beautiful cats that inspire others from their unique characteristics and look. Getting this cat will be the best decision. You can visit rescue or adoption centers to purchase a Tortoiseshell cat or kitten that costs around $1000 to $3000.

When buying a Tortoiseshell cat, ensure its health by getting it examined by a veteran or a reputable breeder.

No, Tortoiseshell cats are not hypoallergenic. Cat allergies have nothing to do with their color of skin. Any cat from any breed and color pattern can get allergies.

Tortie cats are extremely lovable and affectionate creatures. Their ability to provide loyalty and faithfulness make them amazing companions and family cats.

Do Tortoiseshell cats go along with cats?

Depending on the breed, Tortoiseshell cats are friendly in nature. They go along with almost every other cat and human once they are comfortable and develop their trust.

A tortoiseshell color pattern can be observed in any cat that is developed from genes of variation. The basic colors involved in a tortoiseshell pattern are black and red and several cat breeds are able to produce these shades in their kittens.

Do Tortoiseshell cats meow a lot?

Tortoiseshell cats can be very vocal depending on the breed. Due to this nature, people love to chat and spend time with them as they show very friendly behavior.