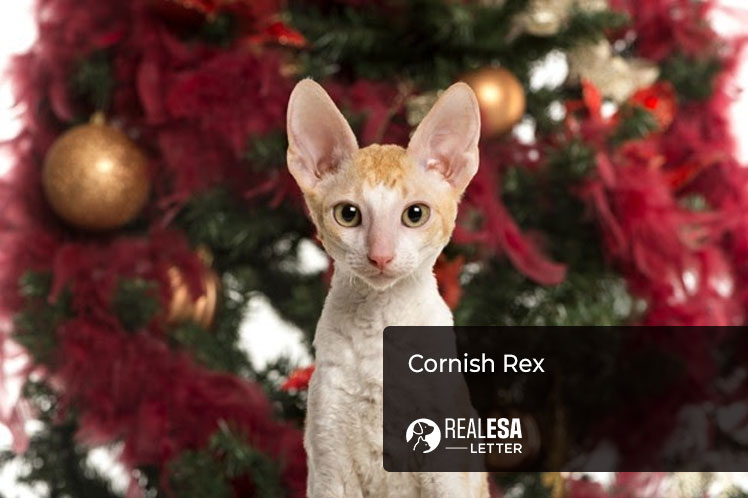 A Cornish Rex is an active, playful, medium-sized domestic cat that is popular for its extraordinary appearance. It can be distinguished from other cat breeds by its extremely soft and curly coat.

This sleek cat is surprisingly heavy, warm to touch, and is arched bodied. Cornish Rex cats are very affectionate and loving, making them great pets. Learn more about this breed’s history, personality, and interesting facts in this article.

The history of the Cornish Rex cat is not as rich as its fellow breeds but is equally interesting. The first-ever Rex came into existence in 1950 in Cornwall, England, when a tortoiseshell and a random white cat produced five kittens.

Out of these litters, one was a curly orange-coated kitten and one white male kitten, which was named Kallibunker by the owner. This cat was vividly different from its other mates as its hair was short and curly, unlike its mother.

The Kallibunker had large ears and a slender tail. Moreover, it had a foreign wedge-shaped that resembled a Rex rabbit. Noticing the appearance, the owner, Nina Ennismore, contacted a British geneticist A.C. Jude to study the kitten and its genes.

On Jude’s advice, Nina backcrossed Kallibunker to its mother, and the mutation resulted in curly-coated kittens. Observing the breed, the name Cornish Rex was decided for it as the cat was developed in the Cornish origin and resembled an Astrex rabbit.

In 1960, when the breeders studied the Cornish Rex breed, it was concluded that this breed was developed due to a recessive gene. Both the parents have to contain this gene in order to produce Cornish Rex kittens.

When the Cornish Rex was bred with Siamese and British Shorthair Cats, the litters produced had normal coats, but they had the recessive gene. On the other hand, when the Cornish cats were crossed among themselves, wavy-coated litters were developed.

In 1957, the first Cornish Rex was brought to the United States and was recognized by the Cat Fanciers Association in 1964.

Cornish Rex are active cats that are highly intelligent and have an amazing sense of humor that keeps the owners entertained. These cats are always excited and interested in everything you are doing.

These hyper cats love to play fetch, jump around the house, and steal food to gain energy for antics. These energetic beings need your attention and appreciation for all their naughty activities. Due to their intelligence, they are quick learners so that they can be better trained. Moreover, Cornish Rex is a type of cat that will not sit in your for hours. It will always be on the go. This cat might not speak English but exactly knows how to deliver its message through its glance and gesture.

Cornish Rex is a playful cat that goes along well with families, especially children. It is extremely social and do well with other animals as well. The outgoing nature makes them good travelers and great therapy and support cats.

The appearance of a Cornish Rex breed is different from regular cat breeds. It is a petite-looking, short to medium-height cat that is surprisingly heavy. The body of this cat is sleek with a long torso and a deep chest.

The arches and curved body of Cornish Rex show no sign of flatness. The head of this cat is small and egg-shaped that is attached to a thin neck. The nose has a Roman look that forms a straight line in profile till the chin. The high cheekbones add depth to the features.

The large, erect, and alert ears stand high on the head that portrays the image of the cat’s attentiveness. The eyes are also large and oval in shape that are extremely expressive and bright.

Cornish Rex and Devon Rex are two cat breeds that are not only similar in names but in their origins as well. Both these cats look alike as they are lean, muscular, and have large ears. However, there are several distinct features that set each breed apart.

This unique breed has several interesting facts that not every person is familiar with. If you are a cat lover and fascinated to learn about the different characteristics, the following “not so known” facts can be really amusing for you.

Cornish Rex is a result of a natural mutation that is known for its distinctive coat fur and playful nature. These cats are friendly, loyal, and affectionate towards their owners. If you have children in the house, these cats will be super excited to be around them.

Getting a Cornish Rex will be your best decision as they can provide great companionship and entertainment to you and other animals around you.

How much does a Cornish Rex cat cost?

The Cornish Rex cat’s fur is soft, thin, and fine without any guard hairs. Due to this, Cornish Rex do not shed much. Moreover, these cats require little to no grooming, making it easier for the owners to look after their furry friends.

Like other cats, Cornish Rex secret oils. Due to the thin coat of hair, these oils are not absorbed because of which frequent bathing is required.

Where can I buy a Cornish Rex cat?

How long does a Cornish Rex live?

A Cornish Rex usually lives for about 15 years. These creatures are active and energetic beings that can even live longer if proper care is given by the owner.

Subscribe to get the latest news about Emotional Support Animal regulations. (it’s FREE)

Do you need tips to keep your dog within the boundaries? Train your ESA!

You will be charged after 365 days.You can cancel your renewal at anytime by emailing
info@RealESAletter.com