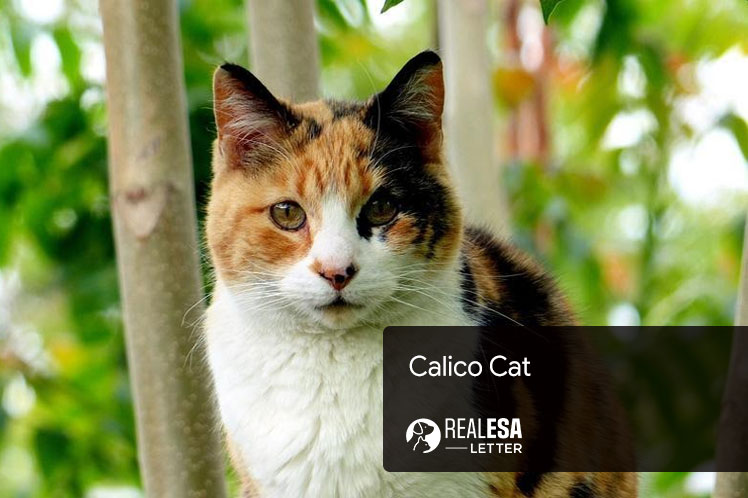 The calico cat is a tri-colored domestic cat of any breed. Most people know it as a breed, but it is a color or a pattern of fur. More than ten different cat breeds allow calico cat which includes Persian cat, British Shorthair, Cornish Rex, etc. Calico refers to the tri-color pattern or color variation of the kitten’s fur rather than any specific cat breed.

Do you want to know the interesting facts about the calico cats? Read on to learn everything about them.

The calico cat is not a particular breed of cat. Instead, it is a coat pattern that by accident occurs in many breeds. Any cat breed that expresses a range of color patterns is known as a calico cat.

The origin of the calico cat is unknown, but it is believed that they originated from Egypt. From there, they have been brought down along with the Mediterranean to port cities in France, Spain, and Italy.

The tri-color effect of the fur or color variation has no specific historical background. However, patches’ interpretation determined domestic cats’ migration along a trade route in Northern African and Europe.

Since October 1, 2001, the calico has been Maryland’s official state cat. They were chosen as state cats because of their resemblance with the state insect and bird. Their tri-color pattern resembles the Baltimore checkerspot butterfly (the state insect) and Baltimore oriole (the state bird).

They typically have 25% to 75% white skin with prominent black and orange patches. Sometimes they have grey and cream color patches. Furthermore, the patches could be of any color, i.e., any combination of three colors in its pattern.

Genetically, they are tortoiseshells in every way; however, they also express a white spotting gene. Furthermore, there is an anomaly that the bigger the white area, the less and bigger the ginger or tabby patches.

Susumu Ohno, a Japanese cell biologist, examined the Barr bodies in 1959 and determined that they were X chromosomes. Later in 1961, Mary Lyon introduced the concept of X-inactivation. It is a concept in which one of the two X chromosomes inside a female mammal shuts off. Mary observed this characteristic in the coat color pattern in the mice.

Since the males have XY sex chromosomes and the Y chromosome has nothing to do with any locus for the orange gene. Hence, the male cannot have both orange and non-orange genes together. That is what it takes to create a calico coloring or tortoiseshell, and therefore, most calico cats are female. Male calico cats are very rare and only occur as a result of genetic anomaly.

One exception is that some faulty cell division may leave an extra X chromosome in gametes that produce the male cat. This condition is known as Klinefelter syndrome or XXY. This particular combination of chromosomes results in calico coloration in male cats.

Calico shares personality traits with tortoiseshell cats, also known as “Tortitudes.” They are independent, spunky, and sassy. On the contrary, calicos are loyal, loving, and sweet cats. Calico cats are well known for their caring and loving nature.

There is a long list of cat breeds that do not accept calicos. Calicos are not allowed in solid color cats, i.e., British Shorthair, Russian Blue, or the Bombay. They are also not allowed in pointed breeds, i.e., Himalayan or the Siamese.

Calicos are commonly found in Scottish fold breeds, Maine Coon, Manx, Persian, and many other cats. Many of the breed standards allow tabby patches in their calicos. In Japanese Bobtails, calico is the most popular color pattern.

Calico is not a breed but a color pattern of any breed. Therefore, their prices vary according to the cat breed they belong to. On average, the price for a calico cat ranges between $400 to $2000. If you want to buy a calico cat, you need to do some searching just like you do for any specific breed.

Adopting a calico from a shelter home costs less than purchasing. The average cost of adopting a calico ranges between $60 to $125. And if you want to have a pure breed calico, you will have to expect a high price to pay. Moreover, male calicos are rare compared to females, so they are more expensive than female calico.

However, the cost of calico is determined by which breed the cat belongs to. Sex, age, whether it pure breed or mixed breed, also weigh in when it comes to the cost of calico. Indeed, adult cats cost more than kittens, and so is the popular color combination.

All in all, the calico cats are worth every penny because they are not just beautiful but rare as well. The price chart given below will give you an idea of how much you should expect to pay for a calico cat.

Cat Breeds That Can Be Calico

As we've established, calico is a pattern and not an entirely new breed. So that means any cat can be calico! With many popular breeds having the chance to produce this tricolored beauty, here are some of your more likely candidates:

People usually love kittens because of their beauty, and loving, and caring nature. However, no one can deny the unique beauty of calico cats. In addition to the tri-colored beautiful coat, these cats come with some interesting facts.

Learn some amazing facts about these colorful and generous kitties.

The calico cats are very rare, especially male ones. And, they are considered the good luck charm, so they can be a great ESA. They are feistier and more talkative than an average kitten. They are also very demanding, temperamental, independent, and allegedly strong-willed.

Their loving, sweet, and loyal nature make them a perfect option for an ESA. If you hunger for unconditional love, a calico will happily and willingly fulfill that need.

So, if you need an Emotional support cat, just ask your mental health professional to provide you a valid ESA letter. Before getting the letter, you need to decide which cat breed you want as your ESA. Choose any calico cat breed from the breeds mentioned above and make it your ESA.

Polydactyl is a condition where the cat is born with an extra finger or toe. It can spontaneously occur in any cat breed.

The appearance of a calico depends on the cat breed they belong to. However, they have a unique tri-color coat, which distinguishes them from other cats in the breed. The fur is mostly white with orange and black patches. The colors are so solid that they do not mix with each other.

What eye color a calico cat can have?

They can have any eye color the cats usually have. As almost ten different cat breeds allow calico cats, so they will get their eye color from the respective breed they belong to.

How many calico pedigrees are there?

No, they are not much of lap cats as they are fiercely independent. However, this still varies from breed to breed as some cat breeds are perfect lap cats.

Yes, as with any cat breed, calicos love to be inside the house and be with the family. They enjoy playing and spending time with their family.

Are calico cats worth money?

Yes, calico cats are worth every penny as they are a rare and uncommon type of cats. Each rare thing is expensive, so are the calico cats.

How rare is a male calico cat?

Why are calico cats more expensive than other cats?

Like anything in the world, the price of something is determined by how rare it is. The same is the case with calicos. They are unique and rare, which is why they are more expensive than other cats.

Do calico cats have more cost than other cats?

No, the general grooming or food expenses are the same for calicos as for other cats. There is nothing specific in calico that makes the expenses higher than other cats.

What do calico cats eat?

Again, this varies from breed to breed. The cat will eat the same things that the other cats in the same breed do. You can ask the veterinarian about what you should be feeding your calico.

Yes, they can eat wet and dry, both foods. Just make sure you consult your veterinarian about the food and how much your cat needs to eat in a day.

How much grooming a calico cat needs?

Calico needs very low maintenance. However, regular brushing and cleaning are necessary for all cats. Claws should be trimmed every two weeks or so and teeth should be brushed two to three times a week.

What are the health issues of calico cats?

This happens due to the XXY combination. Rather than XY chromosomes, males have an XXY chromosome combination, which results in Klinefelter syndrome. However, they can still lead healthy and full lives but also need some extra care.