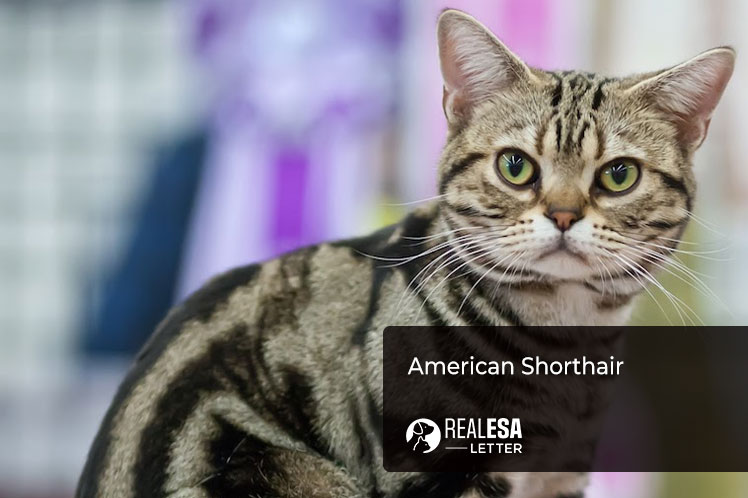 If you look for a pet that will be a playmate for your children, and a gentle companion, look no further. Among all cat breeds, American Shorthair is known for its attractive looks, sweet personality, and maintained health. Moreover, this cat is also very amiable with dogs, other pets, and children.

It is a true breed of a working cat where the general appearance indicates a strongly built and well-balanced structure. Refer to this comprehensive guide to know more about the American Shorthair cat breed and its characteristics.

The arrival of domestic cats in America is still unclear, but it is evident that they arrived with the European settlers. It is because the United States of America has no species from which domestic cats could have developed. These cats were kept mostly aboard ships to protect the food products from rodents.

Such domestic cats have been found in the world since the 1500s. They were mainly present in Jamestown, the first permanent British colony in the New World.

In 1776, the members of the Continental Congress met in Philadelphia to adopt the Declaration of Independence. The ancestors of the American Shorthair were there to witness the historic event. They put their paw print alongside Thomas Jefferson’s signature and happily approved the document.

The cats declared their independence thousands of years ago and became working members of North America’s society. They also perform the age-old service as the perfect mouser cat.

The feline immigrants developed powerful muscles and strong jaws with time. Similarly, they became more than mouse catchers as people started to take an interest in the beauty of this cat.

Firstly, the American Shorthairs were welcomed in the American cat fancy in the late 1800s. At that time, the cat breed was known as Shorthair, but later it was renamed Domestic Shorthair. The first American Shorthair that was registered in this country was an orange tabby male. It was named Belle and was imported from England in the early 1900s.

In the early 1900s, the fanciers got more interested in the imported breeds such as the Persian and Angora. Many foreign breeds were crossed with the black American Shorthair at that time that diluted the bloodlines of the American native.

A group of fanciers began a selective breeding program to preserve the beauty and temperament of the ASH. However, the breed was not accepted completely and was treated as strays even after 20 years till the late 1960s.

Many breeders were also confused between their American Shorthairs and domestic cats. It is because the features and traits of a domestic non-pedigree cat somehow resemble a pedigree American shorthair.

Following this, the breeders began to crossbreed Persians and the American Shorthair to improve the breed and colors. As a result, the body and head type of the ASH was changed and became more Persian in style. Moreover, the face also broadened, the ears became shorter, and the eyes became rounder.

This had disappointed many breeders who were struggling to promote the beauty standards of this cat breed. In return, they made amendments to the declaration that disqualifies any cat that shows evidence of hybridization.

In 1965, breeders voted to change the name of the breed to American Shorthair. With this, they finally received some of the esteem they deserved. Following this, CFA named a silver tabby male the Best Cat and it also received respect in the cat fancy.

Today, the white American Shorthair is the most popular shorthair that became a fitting status for America's hometown breed.

American Shorthair and British Shorthair often get confused with each other. However, they are similar breeds, both in character and looks. The following are the distinguishing characteristics of both cats.

Here are some distinctive physical attributes of the American Shorthair.

The friendly and affectionate American Shorthair is adaptable to his owner’s needs. It makes him the best companion for everyone, either single to seniors. They love to spend time with their owners and love being held by them. However, ensure to support his back to make him feel comfortable.

These cats are good at entertaining themselves, but they also like interactive play with their owners. It includes hunting or playing with puzzle toys. Moreover, they are smart, easy to train, and willing to learn new habits. Their hunting instincts may take over other pet birds and small animals.

As being a social cat, American Shorthair enjoys the company of children and other animals. But they are not that talkative and are patient creatures.

The American Shorthair kitten is an easy cat to care for. Here are some tips for grooming your breed.

It is favorable to keep your American Shorthairs indoors to protect them from diseases spread by other cats. Moreover, keeping them indoors also protects the small birds and wildlife from this talented hunter. They may also run the risk of being stolen by someone if they go outdoors.

American Shorthairs are powerful cats that require strict nutritional diets. It is to make sure that they do not get overweight. It is a common trait that this breed is prone to.

Furthermore, their long lifespans are highly dependent on quality diet. It provides them with enough fuel for their muscular structure without leading to excessive weight gain. Most people feed their cats with a commercial diet. However, there are some things that you should look for in a good American Shorthair’s cat food.

It is also important for the cat to drink an adequate amount of water. If she doesn't drink water from the bowl, add ice cubes or a flowing fountain to attract her.

If you are concerned about feeding your cat properly, consult a vet about proper feeding guidelines.

American Shorthairs require daily play sessions to stimulate her natural desire for hunting and exploring. This breed usually enjoys socializing with humans, but they have enough of an independent streak to entertain themselves.

The interactive toys help to ensure that American shorthairs get enough exercise. It goes along with one-on-one playtime.

It means you don't have to worry about separation anxiety as these cats can also spend time just sleeping in the sun. Just keep her body and mind active, or the breed may develop some behavior issues.

American Shorthair is also prone to certain health issues like other cat breeds. These are discussed below:

If your pet cat is urinating outside the litter box, it may indicate improper nerve function from a spinal defect. This condition is known as Feline Lower Urinary Tract Diseases (FLUTD).

The common symptoms include blood in the urine and difficulty in urination. If the situation becomes fatal, it will lead to kidney disease, urine crystals, and diabetes.

American Shorthair cats also suffer from renal failures where the kidneys don’t cleanse waste from the blood properly. It can lead to dehydration in older cats but can also happen in the younger felines as well.

Many middle-aged American Shorthair cats develop a benign tumor in the thyroid gland that causes hyperthyroidism. The common symptoms are vomiting, weight loss, and increased thirst. If it worsens, it can lead to kidney failure, heart failure, and blood clots.

The American Shorthair might suffer from a genetic disease known as diabetes mellitus. It typically occurs when your cat becomes overweight or eats a poor diet. It can lead to pancreatitis, which causes the damage of cells that produce insulin.

American Shorthairs may suffer from Polycystic Kidney Disease caused by defective genes. It develops cysts inside the kidneys and liver that slowly enlarge with time. Medications can temporarily slow down the progress of the disease, but there is no proper cure.

These cats are usually not allowed to be used for breeding purposes as their prices are quite cheap. Thus, the cost can vary depending on the appearance and health.

If you are looking for a limited registered random-bred cat to raise as a pet, it will cost about $450 – $600. On the other hand, a registered American Shorthair can cost between $850 and $1500 per kitten.

Below-given are some interesting facts about the American Shorthair cat breed.

An American Shorthair is a family favorite pet cat. It is one of the most popular cat breeds worldwide. This cat is considered an ideal pet for a working family with children and an emotional support animal for the mentally disabled. Their temperament and companionship make them the best support cat.

If you are planning to adopt an American Shorthair as your pet cat, contact a reputable breeder. They abide by a code of ethics and have performed health certifications so that you can identify any diseases before buying a cat.

You have to contact a mental health professional to get a valid ESA letter. It is a prescription that allows you to live with your cat pet without paying any extra charges.

In case you need an authentic letter, contact us at RealESALetter.com. We will provide you with a professionally written letter within 24 hours.

Yes, the American Shorthairs love being petted, fondled, or even picked up. They are ideal options for those who enjoy physical affection from their cat pets.

No, this cat breed is not aggressive. Instead, they are known for their calmness and like to make friends with everyone.

Is an American Shorthair cat hypoallergenic?

No, American Shorthairs are not hypoallergenic as they shed less fur than long-haired cats. However, they do trigger allergies in cat-sensitive individuals.