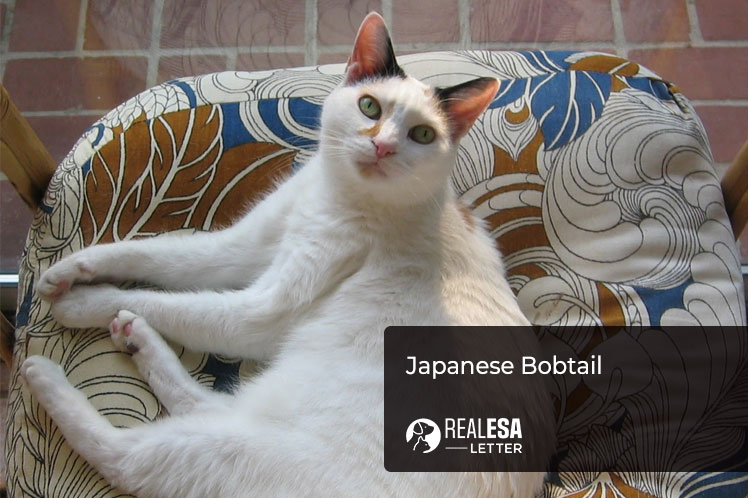 The Japanese Bobtail is an affectionate and loving cat breed best known for its short tail. They are gentle, quiet, and fun-loving cats who will love interacting with their favorite humans.

Japanese Bobtail cats are small to medium in size. They come in various colors and patterns. The Japanese Bobtail is one of the few cat breeds with a naturally occurring stumpy tail that is not associated with any disorder.

Japanese Bobtails are very different from other cat breeds. In this blog, you can learn more about their characteristics and what makes them unique.

The exact origin of the Japanese Bobtail is still not known but it is believed that the ancestors of today’s Japanese Bobtails came to china at the beginning of the 6th century. They have existed in the island nation for at least 1,000 years.

The origin of the bobbed tails is still not known or probably will never be known. However, the breed is around the corner for many centuries. Early Japanese folklore contains many references to short-tailed cats. Japanese Bobtails can also be found in silkscreen paintings and Japanese wood print.

Japanese Bobtail is one of the oldest cat breeds with numerous folk tales as the country in which the breed is developed. Japanese Bobtails have a unique pattern of red, black, and white markings. These markings are called Mi-Ke which were considered lucky.

The Japanese Bobtails were kept by the people who had silkworms. They were used in rodent control. However, the imperial family loved the Japanese bobtail so much that the cats enjoyed all the benefits of the ruling classes. These cats were taken care of like royalty.

One of the most famous stories about the Japanese Bobtail is that one of the great emperors liked the Japanese bobtail so much that he ordered that no one else but only he could own this breed.

A famous artistic interpretation is the Japanese statue of a cat known as Maneki Neko meaning Beckoning cat. These statues can be seen at the displays of Japanese shops where they were believed to attract good people.

The Japanese Bobtail has a bobbed tail caused by a genetic mutation. The tail is sometimes referred to as ‘Pom Pom’.

Below you can find more about the physical characteristics of the Japanese Bobtail.

Japanese Bobtail is a highly active, loving, and smart cat breed. They love to be around people. They can easily learn their names and even respond to them.

Bobtails are very active and want to be involved in everything you are doing. They will not hesitate to give you company when you need it. Bobtails also love to chat and can produce a range of voices. Some breeders describe this feature as ‘singing.’

Because of their intelligence, Bobtails can easily learn different tricks such as fetching and walking on a leash. Their intelligence can sometimes get you in trouble as they can easily open cupboards and get into spaces that are not allowed to enter. All in all, they are pretty fun to watch.

You will mostly find him carrying his toys around, fetching, or playing with water. They are outgoing cats and love the company of children.

The disadvantage of Japanese Bobtail is that they can be stubborn sometimes and it can be difficult to change his mind.

This cat breed is the best option for families with or without children. This cat does not like to be left alone. So, it is better to provide him company all the time.

Because the Japanese Bobtails do not have a heavy undercoat, they are easy to groom. Both short-haired and long-haired coats can easily be maintained. Tangles are not very common and once in a week brushing can remove dead hair.

The Japanese Bobtail does not need a regular bath because the coat is highly resistant. It might not be easy for you to wet your Japanese Bobtail to shampoo him. You can also get pet grooming services from professionals.

Handle the tail gently when grooming your Japanese Bobtail. Brush the teeth regularly in order to avoid periodontal disease.

Trim the nails when needed. Clean the corner of the eyes with a wet cloth to remove any discharge. Use a separate piece of cloth for each eye to avoid the risk of any infection.

Check and clean the ears if they look dirty. Do not use cotton swabs for cleaning the ears as they can damage the inner side of the ears.

It is appropriate to keep your Japanese Bobtail cat as an indoor-only cat to protect him from the threats that outdoor cats face.

The Japanese Bobtail is popular for the tricolor calico pattern known as ‘Mi Ke.’ The other popular color patterns are white, black, and red. The breed also comes in solid colors, tortoiseshells, and tabby patterns.

There are some cat registries that allow pointed or sepia tone coats. Bold and contrasting colors are the trademark of this cat breed.

The silky coat can be short-haired or long-haired. In both varieties, the cat has a very short undercoat. A long-haired Japanese bobtail may have long fur on the belly area and around the tail. Some cats may have tufts on the toes and ears.

All cat breeds have the potential to develop certain diseases and the same goes for Japanese Bobtail. Any breeder who claims that his cat has no health issue is either lying or has no knowledge about the breed.

Don’t purchase a cat from a breeder who does not provide a health guarantee on cats. Also, stay away from breeders who say that their cats are 100% healthy and have no health issues at all or tell you that their cat was kept in isolation because of some health reasons.

The Japanese Bobtail is generally healthy and no major health issue is associated with the breed. But it is always a good idea to buy a cat from a breeder who provides a health guarantee.

The tail of the Japanese Bobtail is the result of the genetic mutation. This mutation is not associated with any health problem. However, Japanese bobtail cats are prone to obesity. So, it is important to make sure your cat is not gaining extra weight.

Reputable breeders always screen for health issues in their kittens. But it is important to screen your cats into adulthood. Because some health issues can go undetected in the later life of your cat.

American Bobtails love the attention of people. These are sweet, loving cats that love human interactions. Busy families should keep in mind that Japanese Bobtails need constant affection and time. If you travel a lot, the Japanese Bobtail makes a great traveling companion as well.

These highly active and social cats get along well with pretty much everyone and don’t mind interacting with visitors as well.

They are sweet happy lap cats and will respond to you whenever you speak to them. You can also consider getting Japanese Bobtails in pairs as they don’t like to be left alone for a long period of time.

These cats can get very close to their littermates and tend to develop strong bonds with other bobtails. They are very interactive cats and love to jump as well. When living with other pets, the Japanese Bobtail is the leader of the group.

The Japanese Bobtail is a great choice of pets for families with kids because of its energy level. He will be excited about any game from playing fetch to dressing up like a doll, Japanese Bobtails are fun to be around.

If you have children at the home, it is important to supervise them to make sure they handle the cat gently and nicely.

Introduce your Japanese Bobtail with other cats and pets slowly and ensure they learn to get along with each other.

Japanese Bobtails are not cats that have short or missing tails. The Manx cat is another tailless cat breed.

The Japanese Bobtail and Manx have short tails because of the natural mutation. This is where the similarity between these cat breeds begins and ends as well.

The Manx is a heavily bodied cat with no tail at all. In contrast, the Japanese Bobtail is a tall and elegant cat breed with just a ‘Pom’ of a tail.

There are genetic differences as well. The Manx gene is linked to many genetic problems. On the other hand, the Japanese bobtail gene is recessive and is not linked with any genetic issues.

Because the original breeding cats are very limited in number, the gene mutation is also responsible for many health-related issues including pelvic malformations and spina bifida.

Breeders are trying to develop cat breeds with tails half of the length of normal cats.

Japanese Bobtails are a great option if you have a busy life as they can travel with you anywhere you want. You should not get a Japanese Bobtail if you are looking for a quiet obedient cat.

Japanese Bobtails can also help in minimizing the symptoms of emotional or psychological disability. An ESA can be any cat and must be prescribed by a licensed mental health professional. You will need an ESA letter showing that the cat is a part of your treatment plan.

Cats are one of the ideal options for those looking for emotional support. They are sweet, calm, and affectionate pets that can provide their owners with a relaxing presence.

Contact us at RealESALetter.com to see if you qualify for ESA.

Yes, Japanese bobtail cats are relatively rare. This is a domestic cat breed with an unusual bobtail resembling the tail of a rabbit than any other cat.

How much is a Japanese bobtail?

Yes, Japanese Bobtails are very outgoing and friendly cats. This breed of a cat gets along well with children and other pets.

The Japanese Bobtail is quite different from other short-tailed cat breeds like the Manx. Although short tails are because of genetic mutation, both cats are not very similar to each other. Cats that inherit the Manx gene can be born with full tails, short-length tails, or no tails at all.