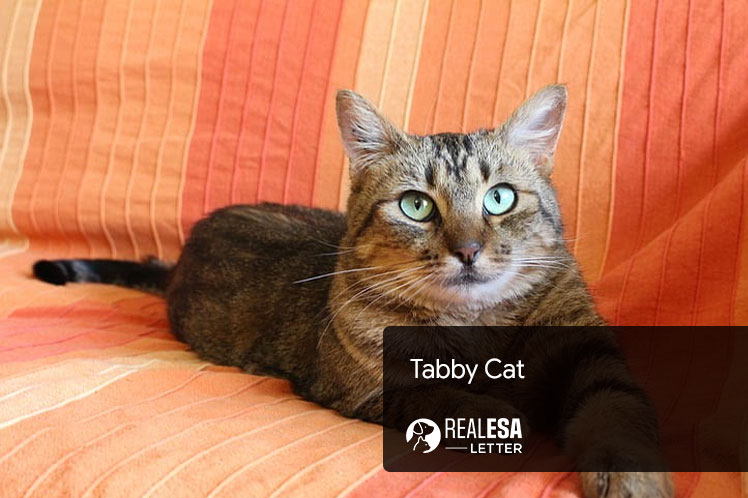 Most people think that Tabby is a particular cat breed but it is not. Tabby cats refer to a specific coat pattern. They don’t represent one breed, the coat pattern is common to many cat breeds.

Tabby cats are very special because their coat pattern has its own genetic and historical origin. The pattern is the result of the modifier genes.

You might have seen tabby cats. They are loved all over the world but do you know where the word ‘Tabby’ comes from and what is the distinctive ‘M’ marking on their head? Find out all this and some interesting tabby cat facts in this blog.

What is a Tabby?

Tabby is not a breed but a specific coat pattern and it can be represented on lots of different breeds. In fact, it is not easy to come up with a single definition for tabby cats. They come in different sizes and color variations.

There are groups of tabby cats depending upon the coat pattern. There is a Mackerel Tabby cat with long parallel stripes and three long large stripes running down the size that resemble a fish skeleton which is where the name of the pattern comes from.

There are many variations of tabby patterns and tabby cats can be found with spots, stripes, swirls, ticks, and various colors. The most common include silver tabbies, brown tabbies, ginger or orange tabbies, blue or gray tabbies, and red tabbies. Another includes as part of the basic color pattern - Patched tabby. It is believed that the Patched tabby may be a Tortoiseshell or Calico cat having tabby patches. Some breeds also allow ‘Tabby points’ with their specific color standards.

What is the Mark ‘M’ on the Tabby Cats?

Tabby cats have different looks but there is one defining feature that all cats have. The ‘M’ mark on their foreheads. This distinguishing feature has many myths surrounding tabby cats.

One story has it that the ‘M’ marking is related to the word ‘Mau’ which means cat in Ancient Egypt. In Christian folklore, a tabby cat showed up to comfort baby Jesus. And in gratitude, his mother stroked the head of the cat and left the ‘M’ marking.

Whereas in one Islamic story, a tabby cat named Muezza saved his Master Muhammad from a poisonous snake. To mark a special place in the feline world, all tabby cats have a distinctive ‘M’ marking on their foreheads.

But the true explanation of mark ‘M’ comes down to genetics. The tabby pattern is because of the three genes that can be found on all domestic cats. Thus we can say that all cats are tabbies. If you see any cat in the sun, you will probably notice the subtle markings.

On the other side, the same genes give leopards and tigers their tabby pattern which makes them successful hunters. The patterns work as a camouflage when they are hiding in the grass and waiting for prey.

What is the Origin of Tabby Cats?

Tabby cats are one of the most famous cats because of their color patterns. They come in whorls, stripes, swirls, dots, and dashes. These patterns are also allowed in more than two dozen cat breeds. The color variations include red, cream, black, blue, brown, silver, and tan.

Tabby cats are very popular among cats and are also very old. If you travel the world, you will see these cats everywhere.

Some pointed breeds also allow tabby points. It is no wonder that tabby cats can be found everywhere. In fact, this gene is present in all tabby cats. In fact, in 1871 an ‘English Tabby’ was documented in the early cat show held at the Crystal Palace in London.

What are the Different Tabby Cat Patterns?

Tabby cats are domestic cats that feature a coat with different patterns. This tabby coat pattern is the result of the agouti gene. This gene is responsible for giving pigmentation to the hair.

A tabby cat may have stripes or any combination of lines, stripes, spots, and swirls. The following are the four distinctive tabby cat patterns.

What are the Common Tabby Cat Colors?

In addition to coat patterns, tabbies come in various colors. These includes:

Which Breeds Accept the Tabby Pattern?

The distinctive feature that is common to all tabbies is the mark ‘M’ on their foreheads. This mark can also be seen on many big wild cats such as Cheetahs, Tigers, and Ocelots.

The first legend about the marking came from the ancient Egyptian days. Cats were referred to as ‘Maus’. The term ‘Mau’ also refers to seeing or light. Since the eyes of cats are so bright at night, we can associate these cats with the moon and their markings clearly reflect that relationship.

Tabby cats have different personalities and temperaments as compared to other cats. They are best known for their fun and easy-going personality. Many cat lovers attest that cats with specific tabby markings have distinctive personalities.

Many cat owners think that the tabby cats are the most outgoing out of all other cats. While others think that their cats show signs of being geniuses. Therefore, intelligence is another quality that is associated with tabby cats. On top of this, their cuddly and loving nature has made cats very popular among kids.

Generally, tabby cats are considered to be the most loving and friendlier cats. Specific personalities also come in a tabby with a specific color marking.

Orange tabby is considered as one of the unique tabbies because of its coat since it is related to gender. Most of the orange tabbies are male.

Ginger and orange tabbies are also believed to be one of the laziest and docile cats. These perceptions about these tabbies were mostly propagated by the media for cats such as Morris and Garfield, both are orange tabbies.

Orange tabbies are the most preferred color among other colors. These are well-loved due to their loving and gentle nature. Almost all domestic cats are mostly affectionate but no one can take the place of the orange tabbies.

The personality of mackerel cats resembles a dog. Just like dogs, these cats are also very loyal and love to be around humans. If you have enough time, you can easily teach them various tricks.

These are very adventurous cats and can give great company if you are going hiking or a casual walk.

If you are planning to get a mackerel tabby, make sure you have enough time to spend with him. And keep an eye when they are outdoors because they love to explore new places.

Grey tabbies are one of the laziest cats. They tend to avoid everything that requires even a little effort.

But a grey tabby can be a great choice of pet for those people who want a quiet pet that does not require attention all the time. If you want to own a grey tabby, you must regulate his diet because such cats are at a higher risk of gaining extra weight.

So, we have talked about how awesome tabby cats are why they make great pets. But how much do tabby cats cost? Here are a few things that you need to keep in mind when purchasing a tabby cat.

Tabby cats can be trained to help humans with any mental disorder. Cats can be of great benefit and can be used for healing and relaxation. Similar to dogs, cats can also provide comfort, love, and companionship to people.

What sets an ESA to a normal pet is the right given to emotional support animals. You can contact RealESALetter.com to see if you can qualify for an ESA.

What is the rarest tabby cat?

Legendary cat is the rarest tabby cat. Lavender color tabby cats are really hard to find because of the rarest color patterns. Out of all other cat breeds, you will most probably find the lavender color in Colorpoint Shorthair cats.

How do I stop my tabby cat from shedding?

The following are some of the common ways to reduce cat shedding.

Tabby cats make better indoor cats than any other domestic cats. These cats have their own distinctive personalities. Some are polite and cuddly while others are a little wild. Then there are those tabby cats who are very shy and can get aggressive with new people.

At what age is a tabby cat full grown?

A tabby cat is considered an adult upon reaching the age of one year. They become full-grown after 18 months of age. Although there are some cats that can grow after 2 years of age like Main Coon, it can grow up to 5 years old.

How long can a tabby cat be left alone?

Small tabby kittens should not be left alone. However, adult tabby cats can be left alone for about 72 hours but not more than that.