What is Cyclothymic Disorder - Overview & Treatment 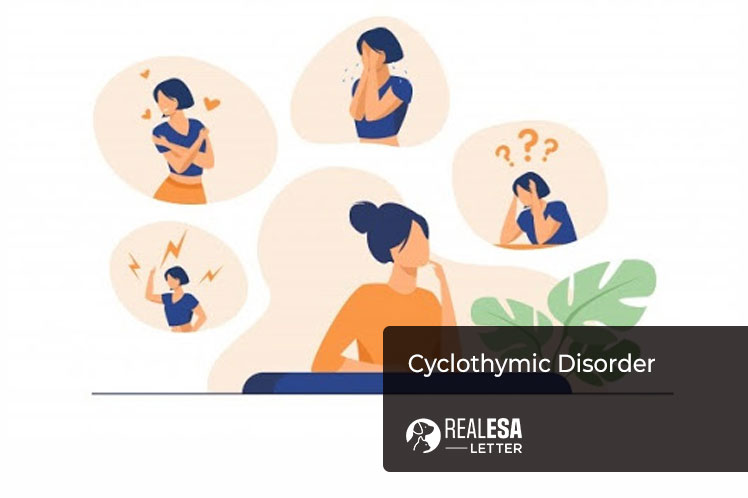 Everyone faces ups and downs but what distinguishes Cyclothymia symptoms from regular mood swings? In Cyclothymic disorder, a person is at a higher risk of developing bipolar disorder. The high and lows can affect the individual’s ability to perform daily life functions.

Therefore, it is important to seek early treatment to handle Cyclothymic disorder before it reaches the chronic stage. In this article, you can find more about Cyclothymia, who are most at higher risk, and how it can be treated.

Cyclothymic disorder or Cyclothymia is a mild mood disorder that causes emotional ups and downs. This condition is characterized by changing mild depressive symptoms along with short periods of mania. To be diagnosed with Cyclothymia, symptoms must present for at least two years in adults and one year in children.

This condition usually starts to develop in the adolescent age. People with this condition often appear to be normal but sometimes they seem moody and difficult for others. People do not get treatment because the mood swings do not seem severe. People with Cyclothymia are often extremely or excessively productive.

Diagnostic and Statistical Manual of Mental Disorders (DSM 5) states that Cyclothymia is different from bipolar disorder. Because of the fact that it does not meet the criteria of major depression or mania. However, there are high chances that people with Cyclothymic disorder develop bipolar I or bipolar II disorder later in their life.

The symptoms of Cyclothymia are similar to bipolar I and bipolar II type but they are less severe. When you have Cyclothymia, you might function well in your daily routine but not always well. The unpredictable nature of mood swings can interrupt your daily life routine at any time.

According to American Psychiatric Association (APA), to be diagnosed with Cyclothymic disorder, you must meet the following criteria.

Depressive signs and symptoms include:

If you have symptoms of Cyclothymia, seek treatment as soon as possible. Individuals with this condition do not get better on their own. If you have no courage to seek medical help, talk about your condition with someone you trust. In this way, it will be easier for you to take the first step to diagnosis and treatment.

If you notice the symptoms in any of your family members, talk with that person about the severity of this condition. You cannot force someone to get treatment but you can surely help someone find a qualified mental health professional.

The exact causes of Cyclothymic disorder are not known yet. But experts say that Cyclothymia can result from the following reasons:

You are at a higher risk of developing this disease if you have a family history of Cyclothymic disorder.

Changes in the brain’s neurobiology can also contribute to developing this condition.

Factors like traumatic experiences and stress can also be the major reasons.

Half of the people with Cyclothymia develop the bipolar disorder later in their lives. In most cases, Cyclothymic disorder remains active throughout their lifetime. While in others, it usually disappears over time.

The effects of Cyclothymia can be damaging to social, work, and family relationships. In addition to that, the impulsive behavior that is associated with Cyclothymia can lead to poor life choices and financial difficulties. Experts say that if you are suffering from Cyclothymia, you are more likely to use drugs and alcohol.

To minimize the effects of Cyclothymic disorder in your daily life, take medications regularly, avoid using drugs, and track your moods. Exercise, get plenty of sleep and talk about the condition with your mental health provider for effective treatment.

Cyclothymic disorder is a rare disease so it is difficult to come up with exact estimates. Because people may not be diagnosed or misdiagnosed as having other mental disorders such as anxiety and depression.

Cyclothymia usually starts in teenage or young adulthood and affects the same number of men and women.

Here are the complications that you might face if you are suffering from Cyclothymia.

Experts are still not sure about the exact causes of Cyclothymia. However, the condition is believed to run in families.

A person does not have Cyclothymic disorder if he feels no symptoms for around two consecutive months or more than that. To differentiate Cyclothymia from regular mood swings, the doctor will diagnose the symptoms.

Diagnosis of Cyclothymia will be made by considering a complete medical history and discussing the condition with a psychiatrist. The doctor may be asked for blood and urine tests for evaluating the physical causes of moodiness. For example, hyperthyroidism can also be the reason for mood swings.

Cyclothymic disorder is similar to bipolar disorder but is less severe. This condition is classified as not serious, when in fact can have a huge negative impact on a person’s life.

The ICD-10 defines Cyclothymia as having several depressive or hypomania periods which are not severe to be classified as bipolar disorder.

DSM-5 defines Cyclothymia as having the same moodiness as the ICD-10 but also notes that:

Your doctor will talk about the symptoms and medical history with you. You will probably have to answer about your use of drugs or alcohol. Lab tests will be carried out to diagnose other medical conditions that may be triggering the symptoms.

A person suffering from Cyclothymic disorder can get the required treatment even when he is feeling stable. Treatment should be guided by a qualified mental health provider who must be experienced enough to handle such conditions.

Generally, Cyclothymic disorder can be treated through psychotherapy and appropriate medications.

Psychotherapy is an important part of the treatment plan. It is an effective way of getting an insight into a condition. Although Cyclothymic disorder can be an interesting experience for some, psychoeducation can bring awareness about the condition and its effects.

The two types of psychotherapy used for the treatment of Cyclothymia are cognitive behavior therapy (CBT) and well-being therapy.

Cognitive behavior therapy helps in identifying negative behavior and beliefs and replacing those with positive and healthy ones. CBT is also effective in managing stress and developing coping skills.

Well-being therapy helps in improving the overall quality of life and it does not focus on treating specific symptoms. A recent study has shown that CBT in combination with well-being therapy is more effective for patients with Cyclothymic disorder.

Other therapies that are also effective in treating the symptoms are family or group therapies.

What kind of medications to be used for treating Cyclothymic disorder depends on the current condition of the person. Mood stabilizers can be used to manage high and low mood swings.

The common mood stabilizers are lithium, lamotrigine, and valproic acid. However, it has been observed that people with Cyclothymia do not respond well to medication as people with bipolar disorder.

Cyclothymia is a serious condition that requires lifelong treatment. If you stop taking medications after some time, chances are the symptoms will come back.

Although some experts say that life-long medication is not necessary. The goal is to stabilize your mood for a significant period of time such as up to six months. If a period of stable mood is achieved through psychotherapy, a person can stop taking medications. However, this decision should be taken by consulting with a mental health professional.

There is no cure for Cyclothymic disorder but psychotherapy and medication will help you in managing the symptoms. Your doctor will provide you a treatment plan that will most probably include therapy in combination with medications. It might be tempting to stop medications after some time but it is also important to stick to the treatment plan.

Cyclothymia is a rare mental health condition. But if not diagnosed and treated on time, it can lead to a bipolar disorder which is not a rare condition.

Many people remain undiagnosed and those who seek treatment are actually dealing with this condition. If you feel that your loved one is suffering from Cyclothymia or bipolar disorder, help them. It is important to convince them to consult with a doctor and find the best treatment plan.

But how ESAs can be helpful in treating or minimizing the symptoms of such mental disorders. An emotional support animal has a long history of providing help to people with mental conditions.

ESAs are those pets that provide love and companionship to their owner in times of stress. If your mental condition is not severe and you are looking for a less effective solution, you should get an ESA. You will also need an ESA letter from a mental health professional. This letter will distinguish that your pet is not just a regular pet but a part of your treatment plan.

You can also contact RealESALetter.com to learn more about qualifying for an emotional support animal.

How long do Cyclothymia episodes last?

If left untreated, the depressive symptoms may last for a minimum of two years in adults and one year in children. Mood changes at a higher rate in cyclothymia than in bipolar disorder and there may be no stable mood period in hypomanic and depressive episodes.

How do you know if you have Cyclothymia?

If you are feeling any of the following for about a long period of time then you should consult with a doctor.

How do you help someone with Cyclothymia?

It is not easy to handle the symptoms of Cyclothymic disorder. Here is how you can help someone who is suffering from this condition.

What are the five mood disorders?

The following are the five most common types of mood disorders.

Is cyclothymic disorder a personality disorder?