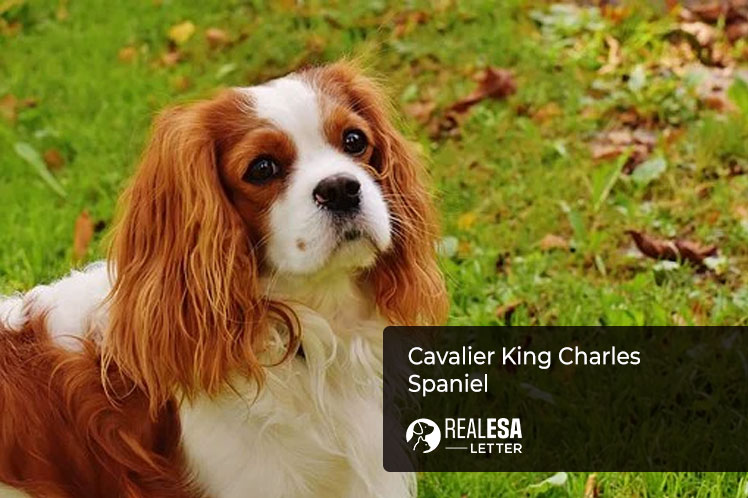 Cavalier King Charles Spaniel is adorable, regal, and even-tempered dogs that were bred to be loving companions but still have their sporty and working nature. They are the miniature version of the working spaniel breed.

When they are not resting peacefully in their owner’s lap, they love to chase birds and play around.

They are purebred dogs that have moderate bones and a free and elegant gait. They have a moderate-length coat that has a slight wave in it. Their feet have long feathers and the dog’s sweet and melting expression is its distinct feature.

They get along really well with kids and other dog breeds and they can fit with their owner’s lifestyle quite well.

These lap dogs are one of the largest toy breeds and their agility and athleticism match that of sporting dogs. They love to play around, hike, run on the beach, and have an active day.

Besides, they can also stay indoors and on the couch watching your favorite television show. Some of them also have impressive hunting abilities.

Due to their sweet and calm nature, they make great pets, therapy dogs, and emotional support animals.

Read the blog to know more about the breed.

‘What is the history of Cavalier King Charles Spaniel?’

They have come from the toy spaniels that were depicted in the paintings of 16th, 17th, and 18th-century artists, Gainsborough and Van Dyck.

The spaniel dogs presented in those paintings have long noses, flat heads, and high ears. These dogs were the favorites of Mary, the Queen of the Scots and she was so fond of them that one of these accompanied her when she was executed.

Later, her grandson and great ransom, Charles I and Charles II named the breed after their name.

Reportedly, King Charles did not go anywhere without them and he even declared that these dogs should be allowed in all public places and the Houses of Parliament. It is believed that the law is still in order in the United Kingdom but it is yet to be confirmed.

Unfortunately, after the King’s death, the dog’s popularity fell and Pugs and other dogs took over. However, at the Blenheim Palace, the estate of the Dukes of Marlborough, white and red kinds of toy spaniels continued to breed. Due to this red and white color strain, this kind of dog is known as Blenheim also.

Earlier, there was no fixed standard for the size of the breed but later English breeders bred the dogs and tried to revive the spaniels depicted in the paintings. Later, Mr. Roswell Eldridge offered prize money to anyone who could present the same old Cavalier.

In 1928, Miss Mostyn Walker presented a dog that had nearly the same features as those presented in the paintings.

The interest revived in the breed and it was named Cavalier King Charles Spaniel to differentiate it from the English Toy Spaniel. The breed’s official club was formed in England and all the club members agreed upon keeping the breed as natural as possible.

The breed came to the US in the 1940s but it got its solid footing when Mrs. Sally Brown of Kentucky formed the breed’s club in 1952. The club was named Cavalier King Charles Spaniel Club (CKCSC), USA. She expressed great interest in breeding dogs in their identical form and despised any changes.

In 1992, AKC approached and invited CKCSC to become the parent club of the breed. The club refused the offer.

Later some members of the said group formed a group named American Cavalier King Charles Spaniel Club (ACKCSC) and applied to the AKC to be the parent club for the breed.

American Kennel Club officially recognized the breed in March 1995. CKCSC, USA, is still a separate breed club but ACKSCS holds the status of being the parent club of the breed.

Cavalier King Charles Spaniels are small-sized sturdy dogs that are known and loved for their bubbly personality and beautiful red and white hued coat. Being small, they hold the status of being lap dogs and toy dogs.

However, they are better known as companion dogs that stand 12 to 13 inches at the shoulders and weigh 13 to 18 pounds in weight.

Below is AKC’s official breed standard.

To preserve its natural state, the breeders frown upon any changes like docking of the tail or ears. Moreover, do not go for extremely small Cavalier King Charles Spaniel dogs. They are small but they are by no means ‘toy’ dogs.

‘Is a Cavalier King Charles Spaniel a good family dog?

Yes, these dogs make phenomenal family dogs that live to please their humans and could do anything to make them happy. They are very friendly with strangers and other animals, something that makes them not-so-ideal watchdogs. They are very smart and they do really well in a number of dog sports.

They are amiable, sweet-tempered, gentle, loving and one of the most affectionate dog breeds that do not mind getting treats and pats from anyone. They are big ‘lickers’ and they love to show how much they love you by licking your face.

They have a strong prey drive, which means that they would chase small animals, birds, and even cars if they get any chances.

When left alone for extended hours, they could be destructive and may bark your place down.

Like other canines, they also need early and ample socialization to socialize well with other family pets and humans. Like other dogs, these dogs also have different personalities. Some dogs would be quiet while others would be quite ‘talkative’.

‘How do I keep my Cavalier healthy?’

Generally, these dogs are healthy and you can maintain their health with proper exercise and high-quality dog food. But, like other canines, these dogs could be prone to a number of diseases and health issues.

To make sure that you get a healthy puppy, buy it from a breeder who breeds Cavaliers ethically and who could give you the health certificates of the puppy and, possibly, his parents and siblings.

The certifications include clearances from the Orthopedic Foundation for Animals (OFA), Auburn University for thrombopathia, and Canine Eye Registry Foundation (CERF).

Here are some diseases that are common in the breed.

Mitral Valve Disease (MVD) - the most common heart disease in the Cavalier dogs. The disease begins from a slight heart murmur and takes the form of a heart attack or heart failure. Older dogs are more prone to heart conditions but these dogs develop it fairly quickly and at one to two years of age.

Syringomyelia (SM) - the disease affects the brain and spinal cord of the dog and it is fairly common in the breed. It is caused due to the malformation of the brain and the symptoms usually appear when the dog is six months to four years old.

The symptoms could be both mild or severe and you should look for signs like ‘air scratching’, scratching a specific body part without touching it actually.

Episodic Falling - many owners confuse it with seizures but it is different from them. It happens when the dog is unable to relax his muscles and they are in constant strain. The symptoms begin at five months and appear later in the dog’s life.

Hip Dysplasia - there could be a lot of factors that may contribute to the condition. Some of these factors include genetics, diet, and environment. The condition is caused due to improper fixing of the hind leg and the hip joint. Sometimes a dog may need surgery to relieve the pain and deformity.

Patellar Luxation - in this condition, the kneecap is dislocated and causes pain in the dogs. This could be crippling and the dogs may have difficulties in walking.

Keratoconjunctivitis Sicca (Dry Eye) - the condition is an autoimmune condition that causes reduction of tears production. The condition could be treated with eye drops and could lead to blindness if left untreated.

All of these diseases are common in these dogs but this does not mean that they will get them for sure. Keep a close eye on your canine and seek medical help in case of emergency.

‘How to take care of a Cavalier King Charles Spaniel?’

Based on their size, these dogs make great apartment dogs. They are moderately active and will not need a lot of space for exercise. To make sure that they are healthy and happy, take your dog on a daily leashed walk.

These dogs are relatively easy to look after and they will need weekly brushing and combing sessions are enough to keep them maintained. They do not shed a lot but since they have feathered hair on ears and legs, you will need to check them occasionally for matting.

Brush the teeth at least twice or thrice a week to remove any tartar and plaque buildup. This will help in preventing gums and tooth-related diseases, including bad breath.

Always measure the food and do not keep it out all the time.

These dogs are lovely and due to their extremely positive and loving nature, they make great family pets and emotional support animals.

Want one as your ESA? Get a genuine ESA letter to bring one of these white and red beauties home.

1. How much do King Charles Cavaliers cost?

The average price of having and maintaining a Cavalier King Charles Spaniel would be around $17,300.

2. What is the average lifespan of a Cavalier?

About 9 to 14 years. The lifespan also depends on other factors like the health condition and activity level of your dog.

Yes, since these canines are really sweet-tempered, gentle, and positive, they make excellent pets. They are very eager to please their humans and due to their intelligence, they are quite easy to train also.

Unfortunately no, these are very dependant dogs and they could not be left alone for long. They are very social and they need human companionship to stay happy.

5. Are male or female Cavaliers better?

If you need a calm dog then a female Cavalier will be better but if you need a sufficiently energetic dog even when he is one year old then go for a male Cavalier. These dogs love to play and will make an excellent choice as your playmates.

How an emotional support animal can benefit you? Learn how you can get an ESA letter!

Do you need tips to keep your dog within the boundaries? Train your ESA!

Weird and bizzare animals your should not consider getting as an ESA for yourself.