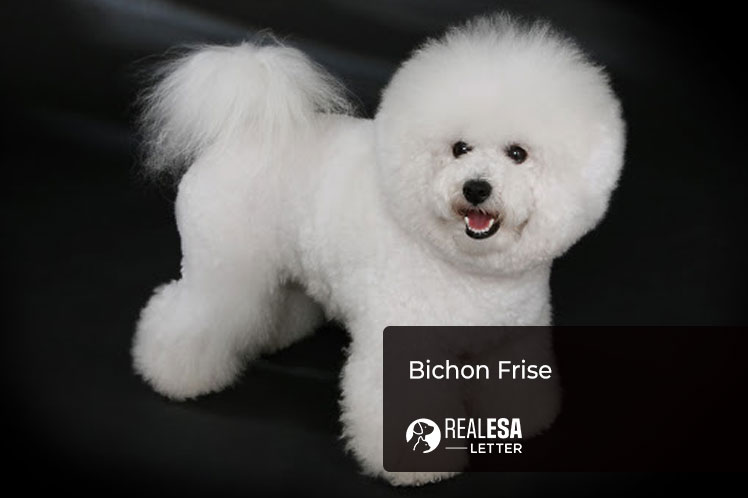 Unlike other dog breeds, the Bichon Frise is one of the most affectionate dogs. Their entertaining nature and nifty tricks make them ideal circus dogs. However, these dogs are more often found entertaining their owners at home.

Bichons are easy-going companions that usually go well with children and other dogs. Thus, they are considered nice little watchdogs. Moreover, their happy-go-lucky temperament draws hugs and smiles.

If you are looking for a complete package of an entertaining but alert watchdog, Bichon Frises is the right choice for you. Check out this guide to know more about the history, personality traits, and health conditions of this dog breed.

The exact origin of the Bichon Frise dog breed is unknown. However, according to some common beliefs, Bichons were descended from a medium-sized woolly water dog, ‘Barbet.’ The name Bichon came from Barbichon.

The Barbichon family dogs include the Bichon Frise, the Coton de Tulear, the Bolognese, the Maltese, and the Havanese, and All these dogs have originated in the Mediterranean and have similar looks.

This breed dates back to the 14th century when the French sailors brought these dogs home from the Canary Islands. The traders who took them to the place used the Phoenician trade route. After that, the Bichon Frise was created in Italy.

Some people also believe that the Spanish seamen brought these dogs to the island. Consequently, in the 1500s, the Italian sailors brought them back to the continent as war booty. The breed became a favorite pet in Europe.

In the 19th century, Bichons were popular during the reigns of France's King Francis I and England's King Henry III. King Henry III loved his dog and even carried him in a basket wherever he went.

These dogs also became favorites of Spanish royal families that they also used in several pieces of art. Furthermore, the Bichon Frise remained strong during the rule of Napoleon III, but it fell out of royalty in the late 1800s.

Until that period, the breed was considered a common dog owned by circus performers and organ grinders. Sometimes, they were also trained in leading blind individuals. However, the breed becomes extinct during this period.

French breeders became interested in the Bichon Frise dogs after World War I and worked hard to protect the breed. In 1933, the Société Centrale Canine of France adopted the official breed standard and declared two dogs’ names. These are Bichon and Tenerife.

In the same year, Fédération Cynologique Internationale recognized the Bichon Frise, where the president renamed the breed. In 1934, the dog became part of the French Kennel Club’s studbook.

In 1956, Bichons were first brought to the United States. Following this in 1971, this breed entered the American Kennel Club’s Miscellaneous Class and registered in the studbook in 1972.

They also became eligible to show the dog shown by the Non-Sporting Group in 1973. Finally, the AKC, in 1975, recognized the Bichon Frise Club of America.

Teacup Bichon Frise is sturdy, small, and a white powder puff of a dog. Here are some distinguishing physical attributes of the Bichon Frise dog breed.

The cheerful attitude of the Bichon Frise is their most special personality trait. This white dog breed enjoys being the center of attention and they love to be loved and adored. They are sensitive, responsive, and affectionate. Similarly, they also seem like a charming and friendly personality to his family, neighbors, vet, other pets, and children.

Despite having an independent and playful streak, these dogs do not like to be alone. Instead, if left alone for many hours, they suffer from separation anxiety.

With this, they become destructive and chew and tear up anything in sight. They can also bark a lot. Therefore, it is not an ideal breed for those who are away from home for a longer time.

However, Bichon's temperament can be affected by several factors, including training, socialization, and heredity. Bichon Frise puppies with good temperament are playful and curious and are willing to get held by their owners.

Bichon is a high-maintenance dog breed as it requires a lot of time for grooming and bathing. But always make this grooming session a positive experience. Moreover, it should be filled with rewards and praise. The following are the ways through which you can groom your dog.

These dogs are somewhat active and need exercise and play. Adult Bichon dogs need 30 minutes to an hour of walking session or playtime daily. Nevertheless, these small dogs do not need too much space to romp. Thus, they are considered suitable for apartments where a fenced backyard is enough for them.

Puppy training classes and early socialization are recommended for this breed. They are easy to house train with a dog whistle because they love to learn and perform new tricks quickly.

But these dogs need to be taught proper manners with the help of obedience training. Furthermore, they also require exposure to different sounds, sights, people, and experiences. It helps to grow a Bichon in a well-rounded fog.

This dog breed can be fed with high-quality dog food. It can be prepared at home or commercially manufactured. But the diet should be according to the age of the dog.

Always keep your Bichons in good shape by measuring their meals. Vets usually recommend feeding the dog twice a day with an amount of 1/2 to 1.5 cups of dry food. Similarly, treats are also a good reward during training but giving too many can lead to obesity.

Typically, bichons are a healthy breed, but they are also prone to certain health problems like other dogs. Thus, it is important to know about them if you plan to adopt this breed.

Bladder infections and stones are very common in these dogs. The factors that cause bladder stones include excessive phosphorus, protein, and magnesium in nutrition.

It can also occur if there are longer periods between urination or because of any viral or bacterial infections. The major symptoms are bloody urine, frequent urination, loss of appetite, or difficulty urinating.

Allergies can occur because of different causes. It can include food or contact allergies. This breed is also quite sensitive to fleabites. The common signs are scratching or licking paws and rubbing the face.

It is one of the most common health conditions found in small dogs. It is also known as slipped stifles, where the kneecap is the patella, and luxation causes the dislocation of a joint. Thus, in this condition, the knee joint slides in and out of the exact place, causing extreme pain. It can lead to crippling; however, most dogs also survive with this disorder.

Some Bichons are sensitive towards routine vaccinations. The most common symptoms include soreness, facial swelling, and lethargy. However, it rarely develops complications like death.

It is an inherited condition where the thigh bone does not fit into the hip bone joint. It can cause pain and lameness in both the rear legs. Similarly, arthritis also develops in the affected dogs. This can be diagnosed with an X-ray screening.

It is believed to be a hereditary condition that can usually develop in young dogs. It can be caused by defective genes and considered hereditary.

The Bichon Frise price ranges between $700 to $2000. It mainly depends on the types of breeders as reputable breeders cost more than home-based ones. Moreover, the purity and age of the dog also determine the price tag.

The special grooming needs, nutrition, and health services will further cost you $600 to $1000 per year. Thus, it is always better to adopt a Bichon Frise as it will cost much lower than buying one.

There are many shelters and Bichon Frise rescue groups that focus on finding great homes for this breed. If you plan to buy these dogs, it is safest to purchase from a reputable breeder offering Bichon Frise for sale. However, make sure that the breeders do genetic testing of the animals. Also, verify the pet’s health conditions before buying.

The following are the interesting facts about the Bichon Frise dog breed.

If you are searching for a perfect dog breed that can make great ESAs, Bichon Frise is an ideal choice for you. This breed is incredibly affectionate and a perfect emotional support animal for those who want to go out and socialize with people. They are also very loving towards their owners.

All you have to do is to contact a licensed mental health professional. He will prescribe you an ESA letter that will allow you to live or travel with your support animal. For this, you don’t have to pay any extra charges.

If you are unable to find a medical specialist, contact us at RealESALetter.com now and see if you qualify. We will provide you with an authentic letter within 24 hours.