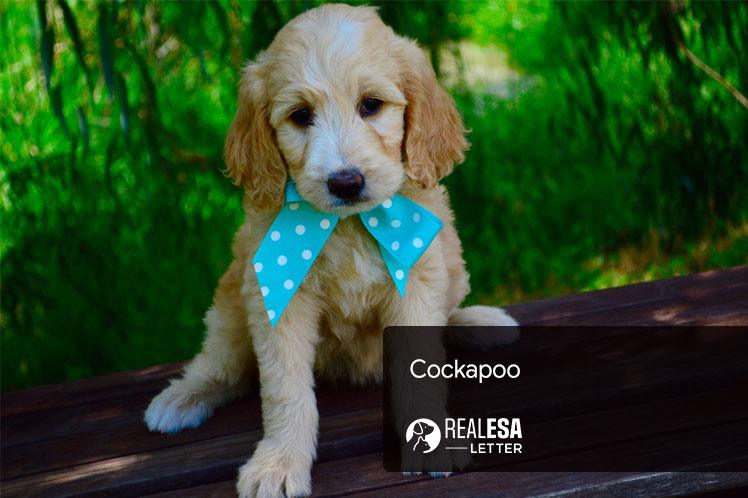 Cockapoo - designer dogs - is an old hybrid of ‘Cocker Spaniel’ and ‘Poodle’ dog breeds, popular since the 1960s. Cockapoo is an adorable small dog with a personality of a big clown. This beautiful dog is not a pure dog breed; in fact, it is bred from a Cocker spaniel and a poodle.

They are small dogs, commonly known as Cock-a-poo or Cockerpoodle. They have a very friendly, loving, and caring nature. This adorable little breed is an active and companion dog, suitable for various households.

Cockapoo is a sweet and affectionate little comedian with a nice temperament and a zest for life. As with any type of hybrid dog, the appearance of cockapoo is hard to predict. Their weight and size vary depending on which type of poodle is used for breeding. Whether the poodle parent is a small, standard, or miniature poodle.

The appearance of the coat, color, and odor are also hard to predict. They come in various colors ranging from black to white or a combination of colors and patterns. The coat style also varies; it could be long, medium, short or wavy, curly, or straight.

The following are the basic characteristics of a cocker poodle: 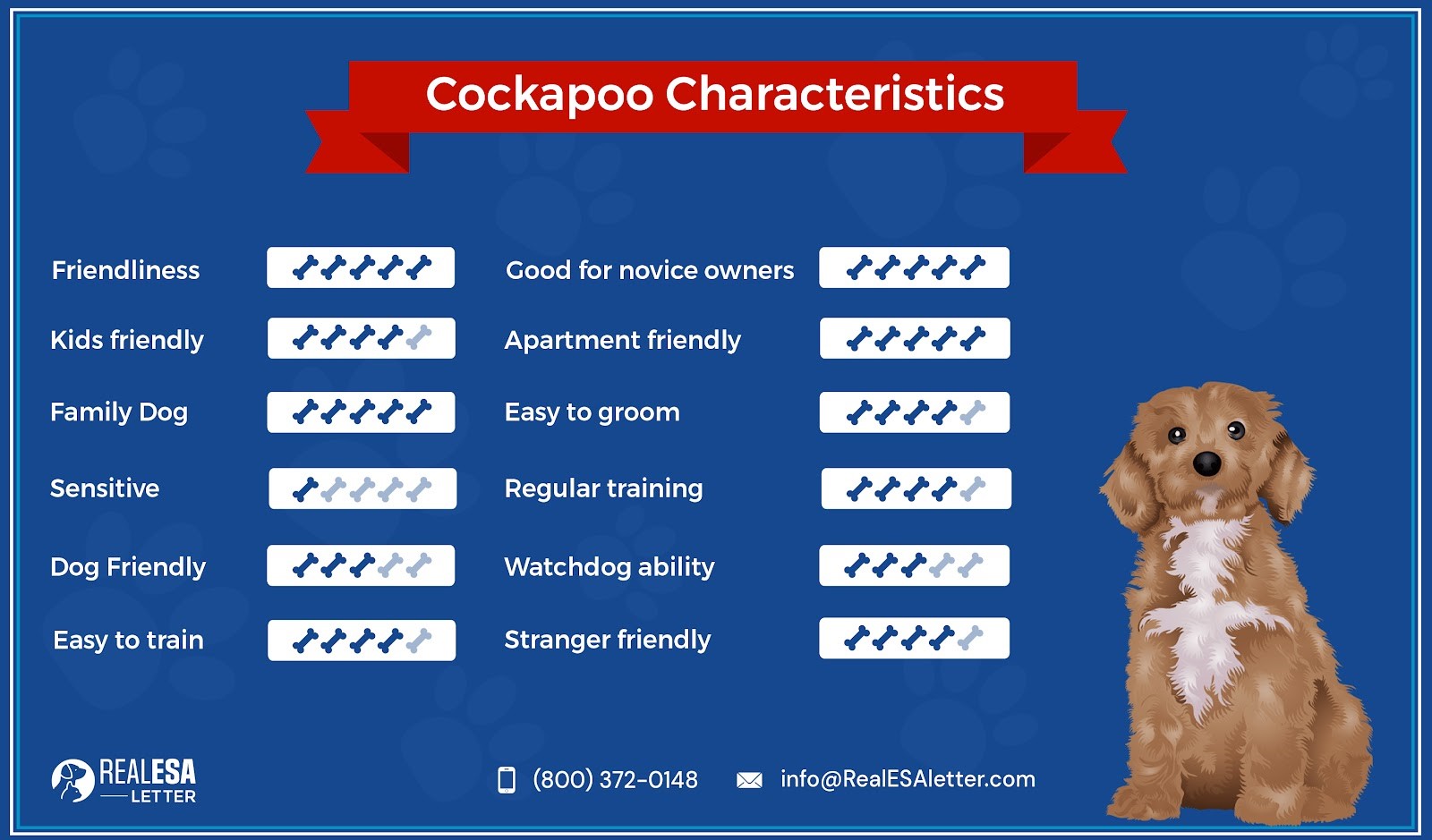 The cockapoo is the very first designer dog breed that came into existence by accidental breeding in the 1960s. The designer breed in the United States wanted a perfect family dog who is not just beautiful but a good companion. So, they crossed American cocker spaniel and Poodle breed. That experiment resulted in a litter of puppies who were loving, easy-going, odorless, and intelligent.

The first breeding may have been accidental, but people loved this adorable, cute, easy-going, loving, and sweet disposition. Impressed by their personality traits and caring nature, designer breeders began intentionally crossing cocker spaniel with poodles. Since then, the designer dog breeders started the long road to make the cockerpoodle a purebred.

The American Kennel Club (AKC) doesn’t recognize cockapoo as a pure breed, but consider them a mixed breed dog. However, to establish the standards and get the breed recognized as a true breed, many efforts are underway by cocker poodle breeders. To create some breeding consistency, the Cockapoo Club of American was formed in 1999.

The club created a breed standard and promoted breeding multigenerational cockapoos while opposing to create a new first generation. This technique is believed to help puppies maintain the desired qualities that are not seen in all first-generation dogs.

In order to breed genuine cock-a-poo puppies, the American Cockapoo Club was formed in 2004. Another club, the North American Cockapoo Registry, is also trying to get the dog accepted as a viable breed. The club was established in 1999 and provided certifications for first-through sixth-generation cockapoo breedings.

Many organizations and clubs want cockapoo to be accepted as more than just a mixed breed. They want this exceptional dog to be recognized as purebred. And, also be accepted into higher circles like elusive pure-bred classification.

Cockerpoodle’s popularity has increased over the decades. However, it may take years of careful breeding to get them recognized as a true breed. But, one thing is certain for sure. This true companion and family dog breed continue to win people’s hearts with their loving and sweet-natured personality. 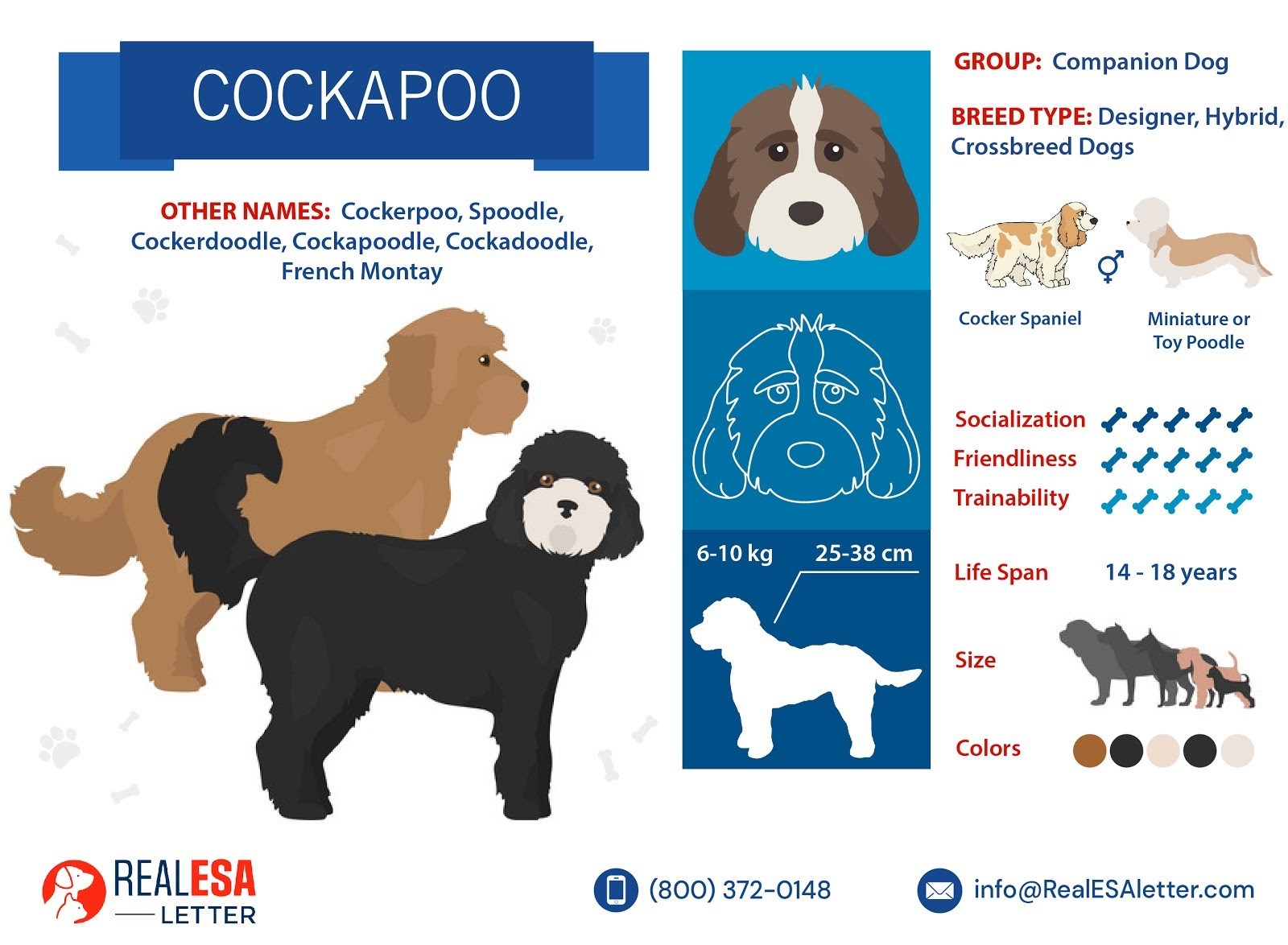 As cockapoos are a mixed breed, they come in different variations: colors, coats, sizes, and even weights. The variation depends on the parent poodle used to breed. Cockerpoodle hybridizes the characteristics of both poodle and cocker spaniel.

They can be found in different coat styles and color variations that can be seen in both cocker spaniel and poodle. They have a wider variety of colors and combinations of colors than is usual in many other breeds.

The size of a cockapoo depends on the poodle parents’ vital stats. Whether the parent poodle is a miniature, small, large, or toy poodle. Cockapoo is bred in the following four size categories:

The cockapoo has a single coat with different variations, and it comes down to which parent breed’s genes are dominant. The coat could be short, medium, or long, straight, curly, or wavy, but it is always soft. It is believed, but not yet guaranteed, that cockapoo inherits the low shedding quality of a poodle’s coat.

However, their coats do not need to be cut like poodles. But, they do need regular brushing to remove debris and prevent matting. Their hairs need to be trimmed to two to three inches and clipped occasionally. The hairs around the eyes should be trimmed to allow visibility.

Most of the cockapoos are odorless and do not need to be bathed often. They have floppy cocker ears that need to be cleaned weekly to prevent ear infections. They tend to have a variety of fur, including straight hairs, loose waves, looping curls, soft or tight curls. They can be groomed to look like cocker spaniel or poodle.

Cockapoo comes in a variety of colors, including:

However, their coloring can be a combination of colors and patterns that can be seen in cocker and poodle.

Cockapoos were bred more for temperament than for appearance. Their temperament depends on what traits they have inherited from their parents. At best, they have the personality of a big clown and are not just intelligent but easy to please. They inherited the loving, friendly, and sweet nature from both parent breeds.

Cockerpoodle typically inherits the poodle’s enthusiasm and tendency to be a little joker. They are commonly known for their happy, friendly, and funny personality. They have an outgoing nature and usually get along with almost everyone. As they are companion dogs from both sides of the pedigree, they should be kept indoors with the family.

Cock-a-poos are also hunting dogs from both sides of the pedigree, so they need continuous physical activity and games. They need early training and socialization like every other dog breed. It ensures that the puppy grows to be a well-rounded dog. They need exposure to different sights, people, sounds, and experiences while they are young.

The dog loves to be with the family and can panic when left alone for a long period. They hate to be left alone, so they can suffer from separation anxiety if left alone for too long. They are very easy to train, but that totally depends on the parent’s temperament. Positive reinforcement is the best way to train them in manners and achieve a high level of obedience.

Therefore, the average lifespan of a cockapoo is between 12-15 years. The life expectancy of cockapoo poodle mixes is about 13 years. Mixes that include English cockers or mini poodles tend to live more than those between standard poodles and American cockers. 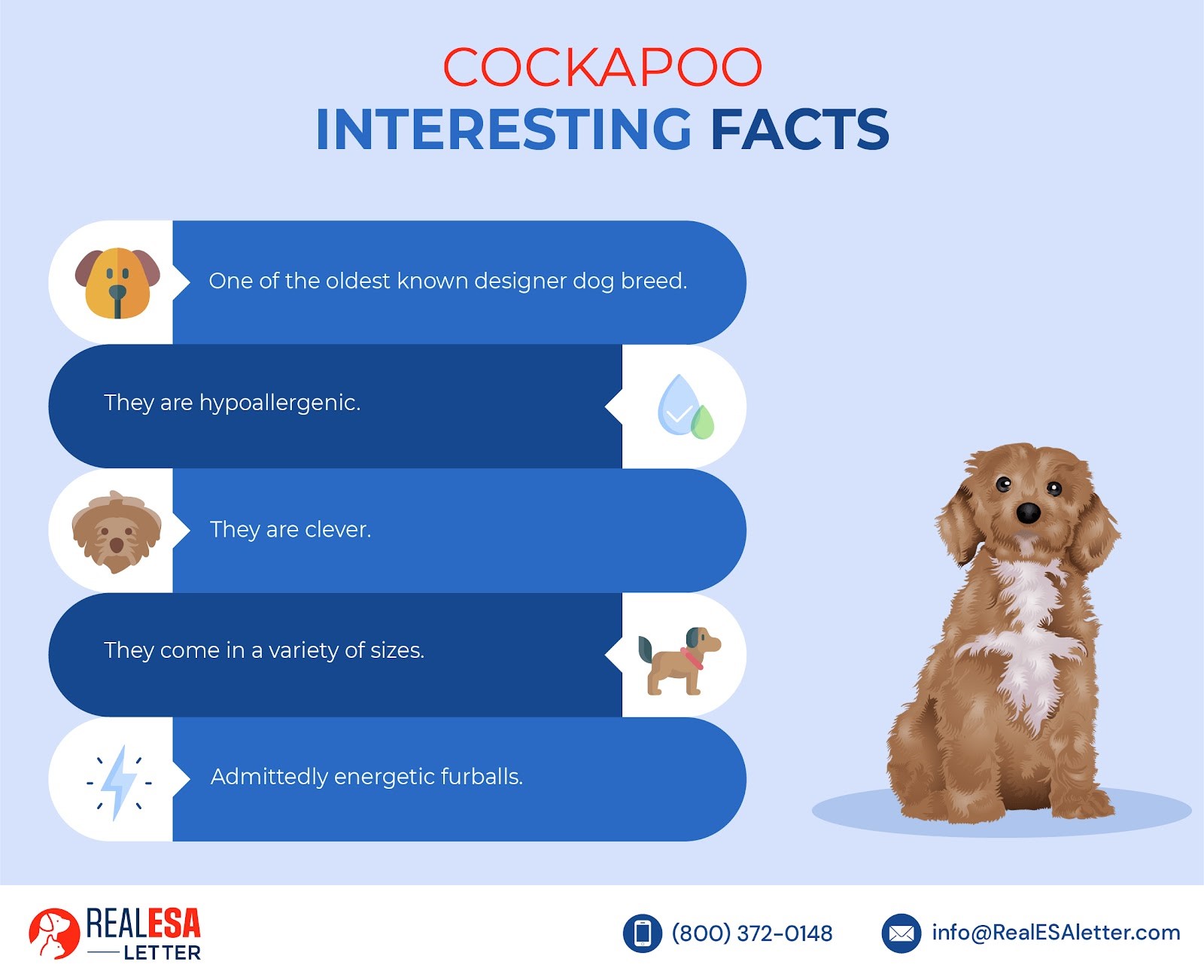 Like any other dog, whether mixes, crossbreed, or purebred, cockapoo dogs have the tendency to develop health problems. They are usually susceptible to the health problems of both poodle and cocker spaniel. However, there are chances that genetic diversity introduced by mixing two breeds reduces the risk of inheriting specific diseases. But, genetic variation makes it difficult to predict.

People usually acquire Cockerpoodle without having a clear understanding of what goes into owning one. And then dogs end up in one of the rescue groups for adoption or fostering. There are certainly a few groups that specialize in cockapoo that can be contacted for adoption.

The cockapoo price entirely depends on the cockapoo breeder’s locale. It also varies from breeder to breeder and demand in your area. However, you should expect to pay somewhere between $1000 and $3000.

Some breeders may provide cheaper puppies who may not have obtained health clearance from the puppy’s parents. Without relevant health checks, cheaper puppies might cost you more in the long run.

Therefore, make sure the puppy you are going to buy is raised in a healthy environment. Also, the puppy is from healthy parents with health clearance.

Cavapoo and cockapoo are both descendants of poodles, which make them very similar. They also have similar personalities and characteristics, which makes it difficult to decide which puppy to buy. The following comparison chart might help you make a decision.

Cockapoos are well known for their friendly, sweet, and loving personalities. They are also famous as family pets and true companion dogs. They can make a great emotional support animal for their owner. They do not just have a playful and gentle temperament, but they are also suitable as watchdogs.

To make your cockapoo an ESA, get a legitimate ESA letter from a certified mental health professional. The ESA letter states your mental disability and makes you eligible to live and travel with your ESA. There are some pros and cons that you should know before getting a cockapoo.

When you decide you get a cockapoo as an ESA, just contact RealESALetter.com to get a legitimate ESA letter.

How many types of Cockapoo are there?

Three types of cocker spaniels are used to breed cockapoo:

Any of these 3 cocker spaniels is mixed with any size of the poodle to produce a cockapoo.

How much do Cockapoo bark?

Cockapoo do not bark frequently as they are not territorial dogs. They have a calm and gentle temperament. However, if they left alone for a longer period, they tend to bark due to separation anxiety.

Yes, they were actually bred to be companion dogs which is the reason they are marvelous family dogs. They have a playful, outgoing, and friendly temperament.

Can a Cockapoo be left alone?

Yes, they can be left alone but only for a short period of time, i.e. 6 to 8 hours. If they are left alone for more than that, they will suffer from separation anxiety and that could result in destructive behavior.

Why is Cockapoo a crazy animal?

Cockapoo is an energetic and lively dog breed. This dog breed’s highly intelligent nature has a downside of boredom. They should be provided with plenty of exercises and fun activities to keep them entertained. Otherwise, they may become hyperactive and choose unusual or destructive behavior to have fun.