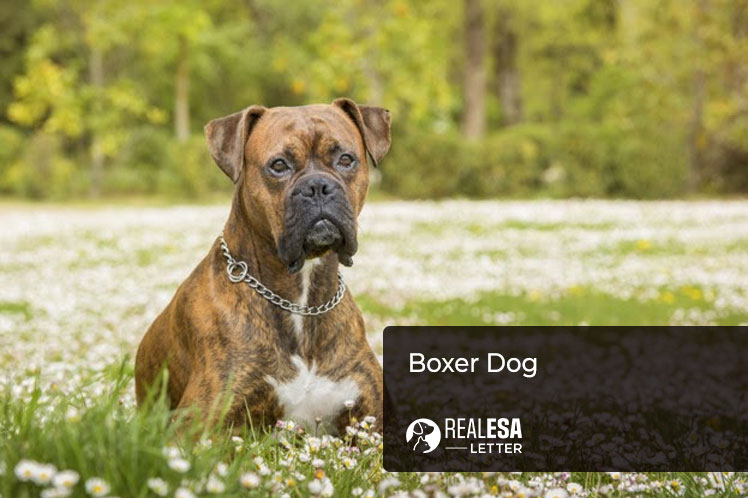 One of the most popular dog breeds in America - Boxer is a beautiful combination of elegance and strength. He can make a strong and energetic companion. With early socialization and good leadership, he is a dependable and amazing addition to any family.

Boxers are medium to large-sized dogs. They have a short coat that is either white, fawn, brindled in color. Boxers would not mind the attention and love from humans.

The Boxer name is derived from the breed’s ability to stand still on its hind legs and boxing with its front paws. Boxer is a great choice of pet for those who have enough time for him and know about the needs of a particular breed.

If you are planning to own a Boxer, here is all you need to know about this popular dog breed. In this blog, you will find out the breed history, personality traits, some amazing facts, and much more. 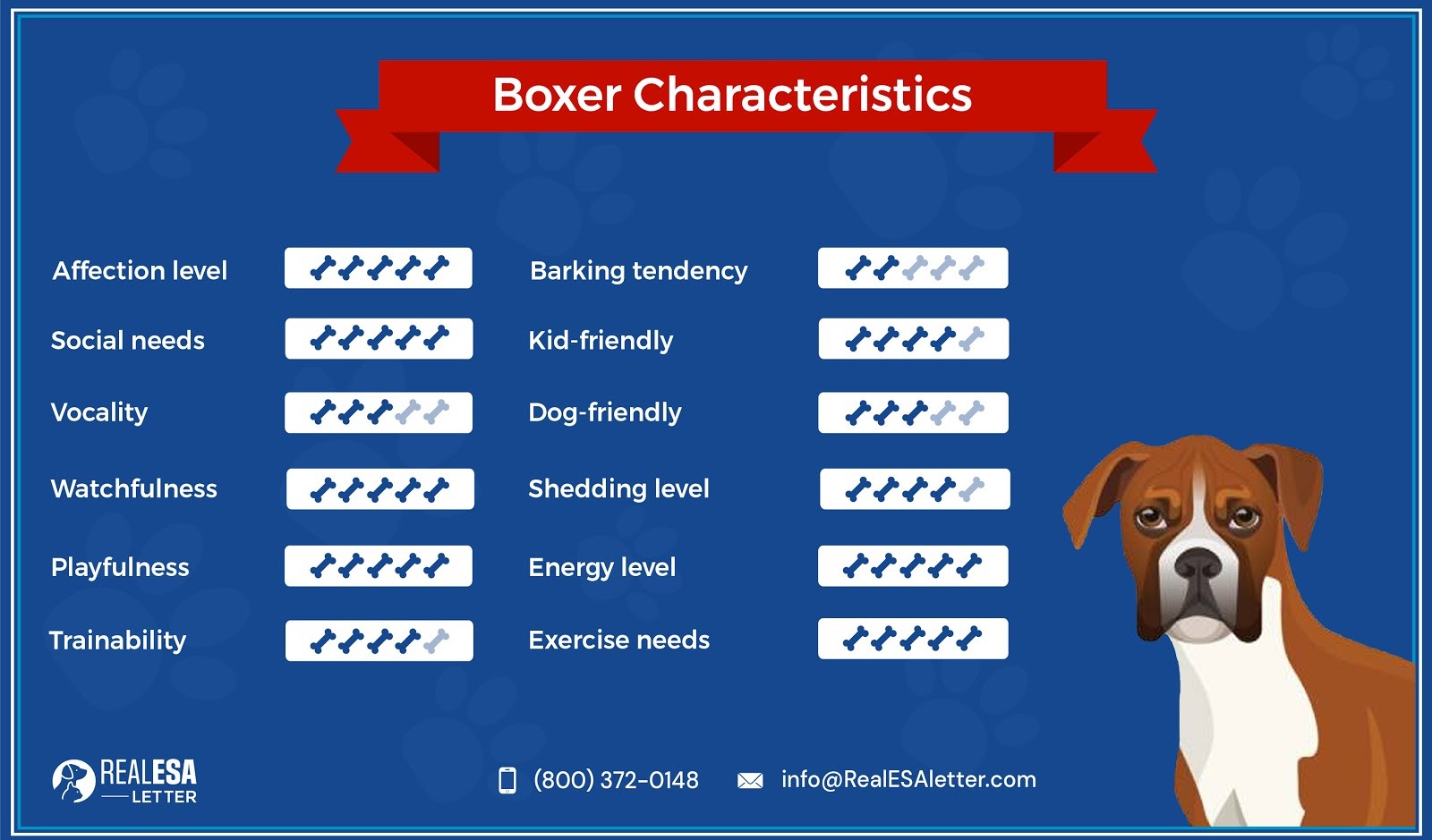 These dogs were used for hunting purposes. Their duty was to catch and hold the prey to the time when hunters arrive. Over time, the Bullenbeisser was used as guard dogs by farmers and butchers.

Boxers that we see today were developed in the early 19th century. A breeder from Munich named Georg Alt bred female Bullenbeisser with a local dog. There were a fawn and white male in the litter and it is believed to be the beginning of the line that we have as Boxer dogs today.

Around the 1890s, three Germans named Hopner, Konig, and Robert decided to stabilize the Boxer breed. They exhibited the Boxer breed in a dog show in early 1895 and in the next year, the first Boxer Club was founded.

In the late 1890s, the Boxer breed became popular in other regions of Europe. The first Boxer was imported to the United States in 1903. In 1904, the first Boxer (Arnulf Grandenz) was registered in the American Kennel Club (AKC).

The AKC recognized the first Boxer champion in 1915. The number of family dogs was very less in the United States to breed to him that’s why there is no significant influence on the breed.

When World War I started, Boxers were used as guard and messenger dogs. Soldiers brought their Boxers with them after World War II. This was the time when this dog breed became very popular in the US. During the 19th century, the modern Boxer was developed in Germany from mastiff-type dogs.

The Boxer's face is serious and worried-looking which is the opposite of their personality. He is a medium to a small-sized dog with a short back and a short tight-fitting coat. His muscles are well developed and are smooth under taut skin.

Developed to serve as a guard and working dogs, he is strong and agile with elegance. Below you can find a detailed description of the physical characteristics of the Boxer dog breed.

The Boxer is smart, playful, attentive, outgoing and a devoted dog. He is a perfect companion for any family. They can show stubborn behavior sometimes but usually responsive to commands. They may not be very friendly towards strange dogs but usually get along well with dogs and other pets.

Boxers are alert and are great watchful dogs. They are gentle and patient with children. They become alert when seeing strangers but are generally polite with friendly people. They are aggressive only when they feel any danger or when in defense of their family.

Boxers can be of different temperaments depending upon several factors such as heredity, socialization, and training. Boxer puppies with good temperaments are very friendly, curious, and playful. They love to approach people and would not mind being held by them.

To evaluate what a puppy will grow up like, it is better to meet the parent dogs, or other relatives. Like other dog breeds, Boxers also need early socialization for a good overall personality. So, exposure to people, various sounds, and experiences are important when they are young. These experiences will help your Boxer puppy to grow up to be an outgoing, loving, and well-behaved dog.

Enrolling your puppies into a puppy kindergarten class is also a good idea. Taking your puppy to parks, in stores, and restaurants that allow dogs also help in polishing their social skills.

Here are some mixed Boxer dog breeds that you can own for mixed personality traits.

The Boxer is a loyal and affectionate companion that would make a great addition to any family. Despite their history of being used as guard dogs, they are very gentle. These dogs are best suited to keep indoor but they will enjoy having a fenced yard where they can play. These tips on how to train your dog to stay in the yard might help you in this.

Boxers are very active and they love to play. If you are planning to own a boxer, make sure you have enough time to play with him. Take him for walks, play fetch, and get them involved in physical activities to satisfy their need for exercise.

Training is also important for Boxers. They are strong and active dogs that can accidentally hurt others if not properly trained to control their actions. The temperament of Boxers also plays an important role in their ability to learn quickly.

Start early so that they take the training seriously. Use firm and fair training methods and don’t forget to reward them. Before you start a training class, settle them with a short walk or play session. In this way, they will get more involved in the training.

You need to be patient when it comes to training Boxers. Some of the Boxer’s training starts when they are 4 months of age while others are until 7 months of age.

Boxer does not require any extensive grooming. His short, shiny, and smooth coat require little grooming. A good bristle brush or rubber curry brush will remove his dead hairs and will keep his coat shiny and healthy.

Set routine care into his schedule so that your Boxer can live longer. It is important to follow a proper diet and exercise routine to keep your Boxer stay healthier and be happier. Here is what you can do to achieve that.

Boxer is generally a healthy dog breed. But there are certain health problems all dog breeds are prone to. If you want to bring home a Boxer, here are some health conditions that you should be well aware of.

Pros and Cons of a Boxer Dog

Here are the pros and cons of a Boxer dog that you must know if you are planning to get one.

The average cost of a Boxer puppy is around $900 if you are buying from a breeder. Anyhow, the cost can range from $500 to $1500 if you are looking for a Boxer dog for sale. If you want to adopt a Boxer from a shelter or a rescue organization, it will cost you much less. The American Boxer Club is a great place to start your search if you have decided to adopt a dog.

Have you heard about emotional support dogs? These dogs are specially trained to maintain their owner’s emotional state.

Boxers are playful and active dogs. Although strong and sober at first, they make great companions. They are also known as guard dogs and if properly trained they can make the best companion for people with any mental health condition. If you are suffering from any mental health disorder and want to get an emotional support animal, Boxer can be the best option.

To qualify for an ESA, you will need an ESA letter from a licensed mental health professional.

Yes, Boxers are good family dogs. They are fun-loving, gentle, and love to play. Because of their energetic nature and large size, they might not be a good option for families with small children.

Is Boxer a dangerous dog breed?

No, Boxer is not a dangerous dog breed. While they are very active and energetic dogs they are also very gentle and loving. They seek attention from their family members and can be stubborn at times but not dangerous.

What are the other dog breeds similar to Boxer?

Here are some dog breeds that are similar to Boxer.

What are Boxers best known for?

Boxers are best known for their distinctive behavior. They are medium to large in size and have black square-jawed faces that may be of white, fawn, or brindle in color. They are often used as service dogs.