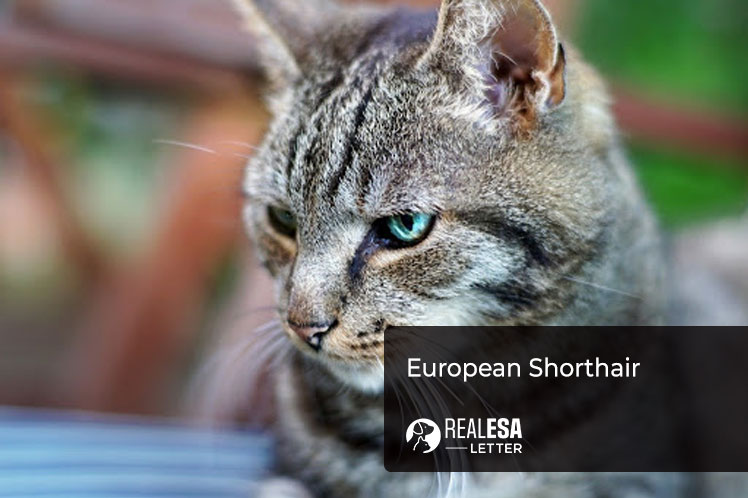 The European Shorthair is mainly described as the pedigree version of Europe’s mixed-breed domestic shorthair cats. It is a friendly and fun-loving cat that is a favorite of families living throughout Europe and beyond.

Unlike other cat breeds, she is extremely docile and has a variety of personality traits. Moreover, they are fond of sleeping. If you are planning to bring these felines home, you will have to find them a cozy place that makes them comfortable.

Sometimes, they also make their way onto a human companion’s warm lap. Thus, this breed is considered perfect for anyone who wants to relax with a furry friend. Have a look at the following guide to get a detailed idea of the European Shorthair and its personality traits.

European shorthair cats can trace their ancestry back to ancient Rome. It was when Romans came to the European continent; they bought cats with them. These cats were responsible for keeping the Roman camps clear of rodents and other pests.

As people created settlements and developed farms, the cats act as reliable mousers. At that time, they were thought to be Europe’s original house cats.

It is developed to create a domestic cat with a slightly wild appearance. These features make it just like its Roman ancestors. Moreover, they are stockier than their close cousins, the British Shorthair and American Shorthair.

Even though this cat breed is different from British Shorthair cats, cat-fancy associations judged it by the same breed standards. It was until they were granted their own category in 1982.

Lastly, this breed is extremely popular throughout Scandinavia, and it is now considered one of the rarest cat breeds in Sweden.

Here are some distinctive physical attributes of the European Shorthair cat breed.

Below are the different personality traits of the European Shorthair cats.

European Shorthairs are great self-groomers, but they do need weekly combing and occasional bathing. It will help to remove dead hairs from the coat while giving it a beautiful shine. Similarly, other maintenance includes teeth brushing, claw trimming, and cleaning the ears every few weeks. For this, you can also seek the help of a veterinarian.

Regular medical checkups are also very important to detect health concerns early. You can also keep their nails in good condition by providing them with multiple scratching posts in different locations around the home.

If these cats have to live indoors, their environment must be arranged to give them access to multiple dimensions and levels. Similarly, they should have a cat tree, ledges, and a view outside. If they are allowed outdoors, they will occasionally live up to their hunter instinct.

This cat breed is not likely to run away because they get easily attached to their homes. However, they can sometimes move several miles a day to find a place where they can relax.

But you can also indulge her love of the great outdoors by installing a high cat condo or perch near a secure, open window. Lastly, these felines can withstand the cold better than too much heat.

European Shorthairs are intelligent animals that are easy to train. Thus, positive reinforcement training with treats and praise is a great way to help them complete tasks like litter box training.

European Shorthairs do not need any special diet. However, a high-quality cat food packed with protein and other essential nutrients is a good option. The cat food is available in both dry and wet form.

The benefit of wet cat food is that it adds moisture to keep your cat hydrated. As the cats have a very low thirst drive, thus they must provide a cat water fountain. It will encourage them to drink more.

The cat owners should make sure not to overfeed these cats because they are prone to obesity. Instead of filling their food dish all the time, they should be fed at an appropriate amount for their weight and age.

If you are unsure about the food options, then seek help from a vet.

Europeans love to play and exercise. It is also necessary to encourage active play as these cats have a lazy side and tend to become overweight.

Thus, treat them with plenty of toys, including interactive options and enticing battery-operated cat toys. These toys must move on their own or make sounds that mimic prey. Also, save your furniture by providing them with a cat tree and a scratching post.

Here we have discussed the compatibility level of European Shorthair cats.

Generally speaking, the European Shorthairs are healthy creatures due to their natural development. They are not prone to many diseases. But they should be vaccinated against coryza, acute leukemia, rabies, and typhus if they frequently go outside.

However, they are susceptible to the same illnesses as all other cats. They are vulnerable to periodontal diseases where prevention and dental care are recommended. Other diseases are discussed below in detail.

Unfortunately, the tendency to put on weight is the most common condition that these cats might suffer from. It can lead to excess weight because of individual or environmental factors.

The individual factors include the effects of sterilization and gender, where males become more chubby than females. Here, feeding behavior and age is also important. Remember, a cat will age much if it is not overweight, as obesity increases the risk of developing other conditions.

On the other hand, the environmental factor includes the overall lifestyle. Thus, any physical activity should be encouraged both indoors and outdoors.

The presence of other animals can also affect food intake. The quality of food also matters as compared to the behavior of the person feeding the cat. Therefore, the use of interactive bowls is highly recommended.

Many Europeans are brachycephalic, which means they have short, squished faces. With this, they can often face breathing issues. Usually, it is not life-threatening but may cause some problems for the affected cat.

It is a serious condition where multiple cysts appear on a cat’s kidneys. It affects their normal function.

It is also known as shock lung and is called ARDS for short. In this condition, the lungs suffer severe inflammation, leading to respiratory failure and death.

The European Shorthair price range is around $100-$500. Nevertheless, the price can vary depending on their bloodlines and history, but they are affordable pets.

You can easily find a European Shorthair kitten for $50 or even less. Moreover, they often sell for as cheap as $30. On the other hand, some cats with pedigree bloodlines can cost $400. If they have special qualities, they can cost more than $1000, though this is pretty rare.

Some of the other cat’s items that may affect the cost of buying this cat breed are:

The following are some interesting facts about the European Shorthair cat breed.

The European Shorthair is widely known as the ‘first house’ cat. It is the direct descendent of the first wild cats to be domesticated thousands of years ago. This detailed guide mentioned above will help you understand the personality traits and other characteristics of this breed.

If you are mentally disabled and planning to adopt European Shorthair as an emotional support animal, it is the right choice. These cats make extremely good house pets and tend to develop strong bonds with their owners.

Being an intelligent and friendly feline, they are less demanding and easy to groom and train. Just get a valid and authentic ESA letter to keep this cat with you. This documentation will allow you to travel and live with your support cat without paying any extra charges.

In case you need a professionally written letter within just 24 hours, simply contact us at RealESALetter.com.

The European Shorthair is one of the most popular European cat breeds. But it remains relatively rare in the rest of the world.

How do I know if my cat is a European shorthair?

If your cat has a shiny, sleek coat with a firm, rounded body and tummy pooches, then you are owning a European Shorthair.

No, they are not hypoallergenic. Cat allergies are mostly caused by the protein called Fel d1 present in a cat’s saliva.

Taking Your Emotional Support Animal Along for the Ride

Weird and bizzare animals your should not consider getting as an ESA for yourself.