Can Dogs Eat Pickles? What About the Pickle Spices?

Home » Blog » Can Dogs Eat Pickles? What About the Pickle Spices? 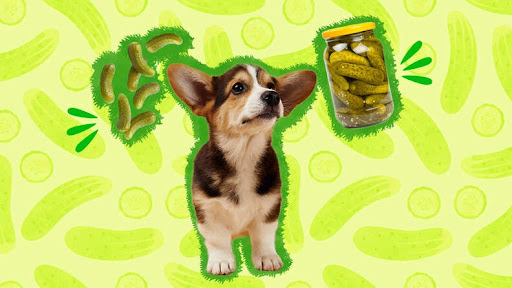 Dogs are cute, but they can make a real mess sometimes. They eat things that might not be good for them. They keep bulging into the jars and cans wherever they find food.

Dogs and pickles is a question that many dog owners have asked themselves at one point or another. While we’re not sure exactly why dogs love the taste of pickles so much, we still can’t resist thinking whether they are safe for dogs to eat or not.

Well, it depends on the dog. Pickles are generally safe for dogs to eat but there is a catch. While it is fine in moderation, watch out for the spices that come along with them.

Read ahead to know more about this!

If you want to know if it's safe to feed your dog a pickle, the answer is not clear. Pickles are not toxic to your dog, but veterinarians don't recommend giving them to your pet. Although pickles have many health benefits, they are very high in sodium and contain ingredients that might be harmful to dogs.

Dr. Carly Fox, a vet at New York City’s Animal Medical Center says, “Although pickles contain vitamins and minerals beneficial to us, the negative aspects far outweigh the benefits for a dog. Overall, they aren’t a great choice to feed your dog.”

“What if my dog ate a pickle?”

Nothing would happen to your dog if your dog ate a single pickle. If you want to give your dog pickles sometimes, you can. We would suggest giving your dog no more than two slices of pickles every few days.

If your dog eats their food too fast, then it might be a choking hazard to give them whole pickles. For most dogs, a whole pickle is too much anyways!

It would be better for your dog if you gave them small amounts of cucumbers instead because this is healthier for them.

What is Pickling? How is it Done?

Pickling is a way of keeping food from going bad. We usually pickle meat, beets, carrots, cucumbers, and peppers. The salty or acidic liquid kills bacteria which makes it last for a long time. Pickling has been around for centuries because it works so well!

Here are some of the key ingredients used while pickling food:

While pickles for people are good, they also offer a few nutrients to dogs.

What Types of Pickles Can Dogs Eat?

Your dog is safest eating regular pickles, dill pickles, or Kosher dills. They should not be fed on pickled onions, pickled garlic, or some other spices. Most people recommend sweet pickles because they have less salt in them so are less risky for your dog.

No! Sweet pickles and bread-and-butter pickles contain a lot of sugar. One pickle can have 7-30 grams of sugar!

The amount depends on the brand, so you should check the label. Eating too much sugar can hurt your dog's teeth because it causes tooth decay. This can lead to periodontal disease which causes other health problems for dogs.

Pickle juice is a salty, vinegary drink that helps keep cucumbers. The high salt content can be dangerous to dogs. Most dogs don't like the taste of pickles, so they won't drink it even if you offer it to them.

No! It is not toxic to your dog, but you should not offer them pickled ginger. Dogs don't like vinegar or citric acid, which are used in the pickling process. So if you eat sushi with pickled ginger, do not give it to your dog too.

Beans and peas are healthy for your dog in moderation in any form. Even if pickled, dogs can eat beans, but make sure there are no additives, spices, and especially salt in the pickle. As they can be harmful to your dog.

Are There any Health Benefits of Pickles for Dogs?

Pickles come in many different shapes and sizes. They can vary in their nutrition depending on the cucumber, when it was pickled, how it was pickled, and what ingredients were used.

“Can dogs eat pickles and cucumbers?”

Pickles are made from cucumbers, which are very healthy for your dog. They have vitamins A, K, and C. Pickles also have minerals like magnesium, manganese, calcium, potassium, and phosphorus. They also have antioxidants that fight free radicals that cause cell damage from oxidation.

The average pickle has just 4 calories. Pickles also have a small amount of sugar and carbohydrate, a little fiber, and a tiny amount of protein. Mostly they are made of water from the cucumbers.

Many cucumbers are pickled in dill. Dill is good for your dog because it has vitamin C and B6. Dogs can eat pickles but they should not because dogs need fresh dill. Dogs can get the same nutrients from fresh dill instead of pickles, which have less nutritional value than the herb.

Some people say that pickles are healthy because of the vinegar they come in. That is probably because of apple cider vinegar's benefits. But pickle vinegar is made with white vinegar and does not have any health benefits.

Some people believe that pickles are healthy. Fermented pickles may be good for humans because of probiotics in the bacteria. But it is not good for dogs, and it is unlikely that they will have the same effect.

How can Pickles be Dangerous for Dogs?

“Why can dogs not eat pickles?”

Some pickles, like kosher dill pickles and bread and butter pickles, include spices and herbs like garlic. Garlic is toxic for dogs!

Pickles that are spicy or hot might also be harmful to your dog.

Even if the spice or pepper in the pickles is not toxic for your dog, they may not be used to it and so their stomach might get sick.

If you know what ingredients are in the pickle, your dog will be OK if they eat a little bit. If you want to be safe, feed your dog cucumbers instead. Be careful not to give too much!

Can My Dog be Allergic to Pickles?

Some dogs can't eat pickles. It is rare for a dog to be allergic or intolerant of a pickle, but exceptions do exist. In case your dog is allergic to pickles or the vegetable is being pickled, then they will have your symptoms. These include common symptoms like coughing to very severe signs like lack of breath.

Furthermore, if your dog is older and has heart problems, it should not have pickles because of the salt in them. If your dog has renal failure, they should also avoid pickles.

The best strategy while feeding any new food to your pet is to only give a bit of it initially and observe them for any symptoms.

Are Pickle Spices OK for Dogs?

There are several spices used while pickling. Some of them are OK for your dog while others are definitely not. A detail of these is provided below:

Allium plants have a compound that attaches to hemoglobin in your dog's blood. It makes your dog’s red blood cells that carry oxygen die too soon. The dog then has a condition called anemia.

Signs of anemia include extreme fatigue, lack of appetite, and kidney damage. This is a serious condition and you need to take your dog to the vet right away for care or it could get worse.

A medium pickle can contain up to 700-1,500 milligrams of sodium. The daily sodium intake for dogs is 100 milligrams per day.

Dogs with heart disease or kidney disease should not eat pickles because they might get sick if they eat too much salt in them (they can die). Salt can also cause high blood pressure in dogs and that will lead to a heart attack if not treated right away.

Some spices like cloves and cinnamon can be bad for dogs if you give them too much, but the small amount in pickles should be ok.

Sometimes people put nutmeg on their pickles. That's ok for some people, but it can be bad for dogs. Do not feed these pickles to your dog because it could make them sick.

What to Do if My Dog Ate Pickles?

If your dog steals a pickle, it is unlikely that it will have any bad effects. This is true if the pickles do not have anything dangerous in them. Keep an eye on them for 24-48 hours to make sure the pickles did not hurt them.

Find out what kind of pickles they ate and talk to your vet. Depending on how many pickles were eaten, or if there is something in the pickles that is bad for dogs, your vet might recommend that you take your dog to the vet right away.

If your dog has eaten a lot of pickles with onion, garlic, or other things toxic to dogs in them then call an emergency vet right away. Also, take care of your other snacks and sandwiches so that they don't steal too many more.

Dogs and Pickles - The Bottom Line!

You should give your dog food and treats in the form of pickles. From the food, 90% should be complete and balanced. The other 10% can come from treats. But make sure that you do not give too many or they will get sick or gain weight.

Plain, unsalted pickles can be fed to your dog in pickle safe dosage recommended by your vet. High amounts of plain pickles or other pickles with spices and a high-sodium content should be avoided.

Instead, you can feed your dog fresh cucumbers, as they are good for dogs. They don't have salt, sugar, or seasoning. You need to cut them up into small pieces so they won't choke on them.