Can Dogs Eat Cucumbers? Is their Green Skin a Green Signal?

Home » Blog » Can Dogs Eat Cucumbers? Is their Green Skin a Green Signal? 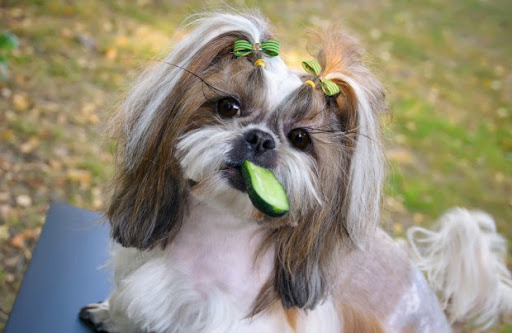 Pets are a big responsibility, and it can be hard to know what they should and shouldn't eat. One of the most popular questions is whether or not dogs can eat cucumbers.

The answer is YES!

The proverb "you are what you eat" applies to dogs also, as they will gladly gorge on just about anything given a chance.

Cucumbers are a great human food or snack, but what do you think about your dog?

Some people believe that cucumbers make dogs sleepy and calm. Others say that they're not good to eat at all.

In this blog, we'll explore the benefits of feeding cucumber slices as well as some possible risks.

You might be surprised by what we find out!

Are Cucumbers Safe for Dogs?

Cucumbers are a great low-calorie snack for your pup!

They're crunchy and they taste good. They only contain 8 calories per one cup of cucumber slices. Cucumbers also offer other benefits, like being very low in sodium and fat.

Some other health benefits of cucumbers for your dog are described below:

“What does cucumber do for dogs?”

A fun way to freshen up your pup’s bad breath?

Cucumber slices – contain phytochemicals that can help eliminate nasty odors from their mouths. They do this by killing the bacteria in their mouth which produce odor.

However, it's still important for you to brush your pup’s teeth every day as well!

Vitamin K is a key component in building strong bones and healthy teeth. A cup of cucumbers contains 19% of the daily recommended intake. So, you must include this in the dog’s diet who needs some support.

Cut up some slices or dice them into small pieces as treats - there are plenty more ways as well.

Water is essential for the human body, and it’s no different with dogs. Roughly 50% to 60% of a dog's body weight can be water.

Luckily there are plenty of ways you can get your pup some more hydration - like by giving them cucumbers as snacks.

Cucumber has about 95% water in its overall composition. So, if you have any worries about how well your furry friend is drinking fluids, this tidbit will put those fears at rest.

If you have an overweight dog, it may be time for a diet. Cucumbers are the best snacks for our overweight canine friends.

They're low in calories and will help keep them slim. A cup only has 16 calories!

Cucumbers happen to be delicious too. So, weight loss is just one more reason we should share it with them from time to time.

Cucumbers are best known for their ability to improve kidney and liver functions in humans, but they have a similar effect on dogs. In fact, just eating cucumber slices can make it easier for your dog's body to perform at its peak, as their organs are healthy.

Cucumbers have been known to help with relieving canine arthritis. Cucumbers have a mineral called Silica. It aids in the strengthening of the joints and connective tissues of dogs.

Occasional cucumber as a treat can majorly benefit older dogs. Especially if they suffer from issues like pain, stiffness, or swelling in joints.

How to Give Cucumbers to Your Dog?

Cucumbers are a great and healthy snack for your dog, but what's the best way to serve them?

How Much Cucumber Can Dogs Eat?

“How often can dogs eat cucumbers?”

When it comes to dog treats, the 10% rule is a common recommendation made by veterinarians. Cucumber should not be given more than once per day and never as their only meal of the day. The cucumber or any other treat should not exceed 10% of their daily caloric intake.

Can an Overweight Dog Eat Cucumbers?

The low calories and high water content make cucumbers an excellent choice for training treats or as a midday snack.

Just be sure to offer small amounts until you know your dog will tolerate them. Also, discuss with your veterinarian before giving them any new foods.

Can Dogs With Diabetes Eat Cucumbers?

Increasingly, pet owners are turning to cucumbers as a sweet-free treat for their diabetic dogs. Cucumber snacks can give your pup the carbs they need without all of the sugar that normally comes with it—but always consult your vet first!

No, they can not!

Don't feed your dog an onion-and-garlic flavored variety of pickles. Though these are cucumbers, which dogs should eat without any negative side effects, there is a lot more salt and added for flavorings. These need to be avoided.

Dogs love pickles so much that they have been known to try stealing them from people's plates and get themselves poisoned in the process.

Can Eating Cucumbers Be Dangerous for Dogs?

Yes! In some cases, eating cucumbers can be dangerous for your dogs. For example, this can happen when they eat cucumbers in an excessive amount. Or if they eat in a harmful form like pickles etc.

Cucumbers should be avoided in the following forms:

What Happens if My Dog Eats Too Many Cucumbers?

Cucumbers are an excellent alternative to typical dog treats. But, like with any fruit or vegetable, there may be some side effects if the above precautions are not followed.

So, are cucumbers good for dogs? Yes!

Cucumbers provide a range of benefits to your pup and can be fed as a treat safely. Have you tried them with your dog yet?