What Does Catnip Do to Cats - Dosage, Frequency & Effects

Home » Blog » What Does Catnip Do to Cats - Dosage, Frequency & Effects 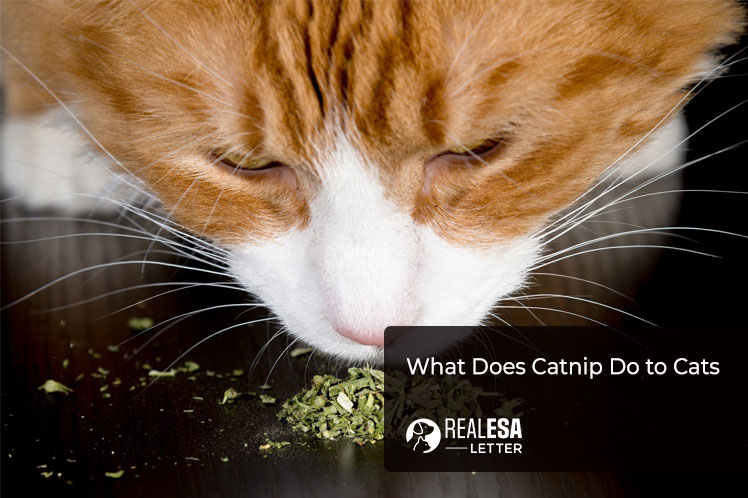 Catnip is considered a valuable part of environmental enrichment. It causes an altered mental state in cats as they usually respond very highly to it. However, the effect is very short-lived, and your felines cannot become addicted.

Even though it is safe and harmless, there are some precautions that need to be followed. There is an interesting phenomenon to see cats go off their scratcher for catnip. Who knew sniffing and eating this plant make them act in such interesting ways.

Despite the proven benefits, it still leaves us with a question, what does catnip do to cats. Read on this detailed guide to find out more about this plant and why it got such an effect on your feline.

Catnip is scientifically known as Nepeta Cataria. It is a member of the mint family of herbs and includes other herbs like rosemary, basil, and sage. This is why catnip gets its alternate name ‘catmint’ from.

The main ingredient in catnip that affects cats is called nepetalactone. It is mainly produced in the stem and leaves of the plant. The plant’s production of this oil component is unique among other members of the mint family.

However, nepetalactone doesn’t just function as a mood-altering substance in cats. Instead, it also works as a natural insect or mosquito repellent.

Where Did Catnip Come from?

Catnip is not native to North America. Settlers bought this over from Europe, Africa, and Asia for treating health issues in people. Whereas people are not that much affected by catnip as cats are. It was used as a mild sedative and tonic for colic babies.

The history is still not clear, but catnip may have its origins back to ancient times. Egyptians were the first ones to discover catnip effects on cats. Romans used this herb for health issues, and the Latin name Nepeta has also been derived from the ancient Etruscan city of Neptic, located in Rome.

The name ‘catmint’ wasn't seen until the Middle Ages; it was referred to as ‘nep.’ It remained an herbal staple for people after settlers flocked to North America in the 18th century. Then its uses were replaced by modern therapies and medications.

Catnip works in a pretty simple way. Nepetalactone is a versatile oil that acts as a herbal insect repellent and a pheromone mimic in cats.

To understand how it works like a pheromone, it is important to know how pheromone works. Pheromones are chemical substances that act like hormones. However, hormones work within the body to affect the body itself, but pheromones are created externally by plants and animals. They affect other members of the same species instead of themselves.

Similarly, it is not a true pheromone in cats as it is not produced by the cats for other cats. Rather it is produced by a plant that has an indirect effect on cats.

Cats have a specialized organ known as the vomeronasal organ. It receives chemical signals and sends them to the brain for interpretation. Nevertheless, many animals have this organ other than cats, but the ability to use it varies among animal species.

This organ is located between the roof of the mouth and the nasal passages and is often used by cats. Cats usually use it to pick up chemical scents left by other cats in urine, especially those in heat.

Nepetalactone causes a chemical reaction and has sensory neurons in the cat’s brain. It leads to lower inhibitions and pretty crazy behavior. It is not 100% clear how catnip affects a cat’s brain, but some researchers have contended that opioid receptors are somehow involved.

Opioid receptors allow our bodies to respond to pain-relieving drugs like morphine and create a sense of euphoria. With this, cats also exhibit a lower response to catnip.

What Does Catnip Do to Cats When they Eat it?

Some cats are genetically more prone to catnip, while others don’t have it in their DNA. Even wild and big cats can show a response to catnip.

According to the study published in Behavioural Processes in 2017, 80% of cats can show a passive response too. It includes decreased vocalizations and motor activity while the other 20 percent of cats show an active response.

As a herb, catnip is easy to grow at home. With this, you may find your cat indulging in it at intervals throughout the day or even chewing on it. They usually react to catnip by flipping, rolling, rubbing, zoning out, meowing, and growling. Some also become hyperactive and aggressive if you approach them.

Similarly, it can also provide health benefits by making your cat extra relaxed and happy. In case your cat is lazy and prefers a nap, catnip is a good way to encourage play and movement. It can also reduce stress for anxious cats in unfamiliar settings. So it is considered a fun or harmless way to keep your felines entertained.

Moreover, if a cat eats a lot of it, it can make him sick and cause vomiting, diarrhea, dizziness, or trouble walking. These are some common symptoms of catnip poisoning in cats.

How Long Does Catnip Effects Last?

The effects of the catnip vary in length, depending on the cat. Usually, these sessions last about 10 to 30 minutes, after which your cats began to lose interest. It can take them almost two hours to reset and become susceptible to the catnip again. Sometimes as being an inherited sensitivity, its effects do not show up immediately.

Diagnosis of Catnip Poisoning in Cats

Diagnosing catnip poisoning in cats is difficult as there are no specific tests to identify the toxicity. The vet diagnosed the condition in the cats with the help of possible symptoms.

This information is important to figure out the possible causes. Furthermore, the veterinarian may also conduct a series of diagnostic tests to ensure that the cat suffers from this serious condition. These include:

However, keep in mind, there is no proper treatment for catnip poisoning in cats. A drug may be required to induce vomiting, or the cat will be encouraged to consume a large amount of water. It will help to eliminate the toxin from the body.

How Should I Give Catnip to My Cat?

You can give catnip to your cat in the following forms:

Catnip sprays are a good option for cats that get an upset stomach from ingesting the plant. You can also spray your cat’s favorite toy, tree, or scratcher. Moreover, you can also sprinkle dried catnip on a cat tree, cardboard scratcher, or roll a toy in it.

However, catnip toys are the most popular way to give his herb to your feline. You can also grow fresh catnip, but it is much more potent than dried ones. It will not only be entertaining for you but will also provide fun, enjoyment, and exercise for your cat pet.

The Do's and Don'ts of Catnip

Have a look at the following dos and don’ts of the catnip plant to get an idea of using this essential herb.

Is catnip a drug for cats?

It is a recreational drug that is routinely given to cats. It makes them freak out, and they show reactions like rolling on the floor or drooling.

Is Catnip a hallucinogen for cats?

No, it is not hallucinating for cats, and they are aware of their surroundings. However, it is obvious that the cat is enjoying herself, but still, catnip is different from human drug use.

Can I put catnip in my cat’s food?

Yes, we can put catnip in the cat’s food, and it is completely safe. There is nothing in it that can harm your feline unless it has eaten a large amount of catnip.

Cats usually don’t like it fresh and prefer to have a dried catnip.