Ringworm in Dogs - What are the Main Causes & Treatment?

Home » Blog » Ringworm in Dogs - What are the Main Causes & Treatment? 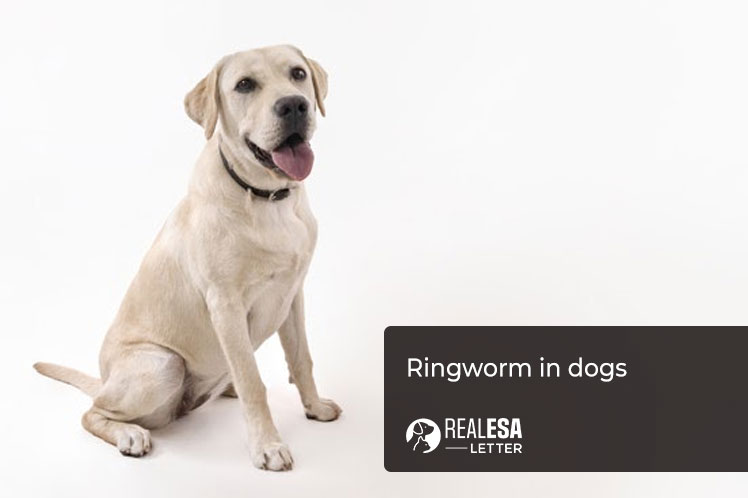 Ringworm in dogs is an infection caused by a fungus. The name comes from the fact that the rash, which is typically red and itchy on humans, often looks like ring-shaped patches on canines.

The most common symptoms of ringworm are itching, hair loss around the area with lesions, crusting or flaking skin near lesions, and pus-filled blisters that eventually break open to form ulceration.

Treatment for ringworm usually involves topical antifungal medications applied to the affected areas 1-2 times daily for 2 weeks or until all signs have cleared up.

This post will explore the symptoms, treatment, and prevention of ringworm in dogs. It will also discuss how to tell if your dog may have ringworm.

What is Ringworm in Dogs?

Ringworm is a type of fungus that typically causes round, raised red markings on the skin. Scientists who study this fungus call it Dermatophytes. This fungus is divided into three groups: Microsporum canis which infect 70% of dogs with ringworm; Microsporum gypseum which affects 20% and 10% is caused by Trichophyton mentagrophytes.

Ringworm is an infection that affects the outermost layer of skin and hair follicles, but sometimes also infects a dog's nails. Puppies and senior dogs are most susceptible to more widespread infections, as they often don't have any natural immunity against it.

Cat-owners beware! Ringworm is more common in pet cats than dogs, but it can be caught by both. Dogs get this condition from coming into contact with animals with ringworm or people (or their pets), dirt, and surfaces like furniture, bedding, grooming tools, etc. Basically, anything that has come into contact with the saliva of an animal carrying it.

Symptoms of Ringworm in Dogs

Ringworm, while not life-threatening to dogs, is highly contagious and should be properly treated. Knowing the symptoms in canines will help you catch ringworm before it spreads to other pets or humans.

A circular pattern with fur loss on the body that starts off-center is a sign of early infection for canine owners who know what they're looking at. So, it is important to check your pup's skin regularly.

Mostly diagnosed by fungal culture, ringworm is a highly contagious fungus that can be transferred to humans. Ringworm usually does not itch, but rather leads to dry and brittle hair on the affected areas of your dog.

The infected claws are also typically rough or brittle as well as scabby and inflamed skin in some cases, which will always make it difficult for them to run around as they want to. If you notice the following symptoms in your dog, please contact your veterinarian immediately.

You might see a lot of changes in your dog's coat, or they may start to lose hair. They could also have inflamed skin and other signs that don't seem right for their age - especially if it seems like they're getting worse over time. It can be really hard to know the cause without going through all the possibilities with your vet.

Treatment for Ringworm in Dogs

Regardless of the severity, if you have a dog with ringworm and want to prevent it from spreading to other pets or family members, your veterinarian will recommend how to treat your dog.

Your doctor will consider factors such as how severe their case is; whether there are any children in the household that may be susceptible (such as infants). Early stages won't need much care while late-stage cases require more aggressive treatments.

Ringworm is a very common condition in dogs, and treatment can be both topical (applying creams or ointments) and systemic. In order for the ringworm to clear up completely, it's important that all environmental contamination is eliminated as well.

Prevention of Ringworm in Dogs

Ringworm is a type of fungus that can be passed from one animal to another or even from an animal’s environment to humans. Dogs are the most common carriers, but cats and other animals could also transmit it as well. While there's no need for routine ringworm preparation in many cases, you should know how to identify signs if your pet does get infected with this condition so proper measures can be taken immediately.

What precautions do owners have against their pets contracting ringworm? The best way is by avoiding any contact between your pet(s) and areas where they may pick up the infection such as bedding and furniture which will help keep them safe until treatment has been completed.

Ringworm is very contagious and can infect humans easily. In order to avoid exposure, it's important for children with a weakened immune system not to touch the dog during treatment. Ringworm will more likely cause symptoms if the human has a suppressed immune system.

If you develop skin lesions, such as small patches of thickened and reddening skin with raised scaly edges, seek medical attention immediately.

The fungus that causes Ringworm is hard to get rid of and if untreated, it can last for 18 months in the environment. Try not to touch anything when you know someone with ringworm or have just been around people who are carrying a contagious disease like this one because re-infection may occur from handling an infected animal or washing your hands after they've handled something first.

It's important to wear gloves when handling animals if they are suspected of having this fungus on their body. So, that it doesn't spread through contact from person to person; additionally, wash hands thoroughly afterward. And wash all surfaces touched.

Does Ringworm in Dogs Affect All Breeds?

Ringworm symptoms may not show in all dogs that come into contact with it. Ringworms depend on the fungus type, as well as a dog's age and health.

Any dog can develop ringworm but some are more at risk than others such as puppies, very old or immunocompromised pets who have been groomed without proper cleaning tools to remove dead skin cells where fungi live and feed off them for food. They get inside their bodies through hair follicles or open wounds. They grow quickly because many breeds share similar genetics which gives these small parasites an immediate foothold when infecting other animals from breeding groups.

The signs of ringworm can be difficult to spot, but the virus affects both humans and their pets. If your dog has been diagnosed or if they suspect that they may have ringworm then do not handle them with bare hands because it is possible for you to contract this condition as well! The best thing you could do in order to stay safe from this condition would be to wash up after every touch.

What should I do if my dog gets ringworm?

Ringworm is a dangerous fungus that can live anywhere and affect anyone. If your dog has any indication of the infection, you should contact your veterinarian immediately. Ringworm can be transmitted to humans in homes with dogs where it could potentially spread throughout entire families or even communities.

If you develop a fungal infection, over-the-counter medications may help. Effective antifungals include miconazole (Cruex), clotrimazole (Desenex), and terbinafine (Lamisil). To apply these treatments to your rash, clean the area before applying them 2 or 3 times per day as directed by the package instructions.

How often should you bathe a dog with ringworm?

It is recommended by veterinarians that you should bathe your dog with medicated shampoo twice weekly with no exceptions until they're back up on their feet again.

Can you use antifungal cream on dogs for ringworm?

How much does it cost to treat ringworm on a dog?

Ringworm is not a very expensive condition for most people. Even though it's known to cause annoyance, the cost of diagnosis and treatment are often under $100 in total.