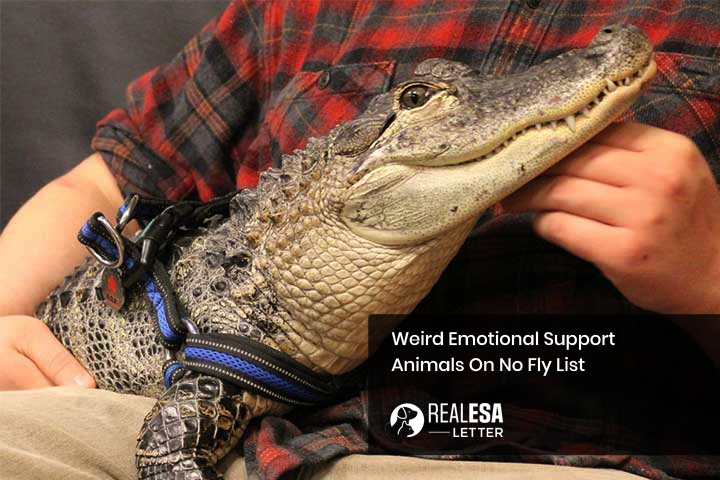 Although American Airlines is considered to be the most pet-friendly airline with tons of positive reviews, still, there are some species that are not allowed on the plane. Generally, these prohibited animals are cold-blooded reptiles or animals that are not fit to be domesticated.

What is an Emotional Support Animal?

ESA is an animal that helps in providing emotional support to a person with a disability. These animals could be anything from a dog to a hamster or a guinea pig. But there are some extremely bizarre ESAs too.

Watching these unlikely emotional support animals seems as if the owners have gone a bit too far. Are these weird animal species really providing any kind of support? Or people are just misusing their ESA letter to get their bizarre animal for the travel and living benefits?

Although the most common types of emotional support animals are dogs and cats. services and support animals can also provide therapeutic value. But there are certain animals that are prohibited.

For example, a red-lipped batfish and star-nosed mole should stay on shows like strange animal facts. For ESAs, choose sensible animals.

Unfortunately, people have started misusing the ESA letter by getting weird animals. This has left a bad taste regarding the emotional support animals and is depriving the people of utilizing their ESA privileges.

If you are considering a peacock or a reptile as your ESA just because its color or movements fascinate you then stop and think again. Ideally, an ESA must be capable of providing you comfort and if you are someone struggling with stress and depression then you will need occasional hugs and cuddles. Do you think a peacock or a reptile could do it? We don’t think so.

So, be wise and responsible and don’t ruin it for people who genuinely need an emotional support animal for themselves.

Weird Animals that are ESAs...But Should They Be?

Yes, you can keep any animal as an ESA but don’t forget that some animals cannot survive in a confined place. That is dangerous for them as well as for you.

You might have an exotic animal as your ESA such as lizards, alligators, crocodiles, and some insects such as dragonflies, but other people around you might not be okay with your animal.

So, these animals are not allowed to travel with you on the plane.

Despite the fact that flying with a dog or a cat and letting them accompany you while traveling is allowed, this law does not apply to birds.

Just like some amphibians or mammals, birds are also on the no-fly list. It does not matter if your bird is exotic or common; you will not be able to carry it around on the plane.

It is important to note that non-household, or the birds that could not be domesticated, birds such as farm poultry, waterfowl game birds, and birds of prey are strictly prohibited.

Similarly, peacocks are also not allowed on planes. Flying with a dog or a cat is different from having an exotic bird like a peacock. The reason is not their large size only.

Peacocks are not very disciplined when they are in a state of panic.

The same goes for the squirrels. They might be cute creatures, but they are rodents. Don’t expect a squirrel to behave in a disciplined way like a rabbit.

Rabbits and hamsters are allowed if they are kept securely in a cage, but that is not the case with a squirrel, a peacock, and sugar gliders.

Insects, spiders, and similar creatures are not allowed on the plane. Because these creatures can trigger phobias among others who are not a fan of bugs and insects. While your spider might be a source of relief for you but it will be causing severe stress to others.

All snakes sold in the United States are mostly non-venomous and are not a threat to public safety.

They might provide therapeutic support to you but they are not allowed to accompany you while traveling.

So, nearly all international airlines do not allow exotic and weird animals to travel with you in the cabin. Besides the ones that are mentioned above, there are some other weird ESA choices that we have mentioned below.

Though some of them may be domesticated, they will not be allowed to travel with you on the airplane.

Therefore, we suggest that you choose a sensible and well-disciplined animal as your ESA and in case of service animals, travel with trained service animals.

The Air Carrier Access Act effective since 1986 and enforced by the US Department of Transportation allows the ESA owners to travel with their animals. But there are special requirements that you must meet in order to carry your animal along.

Although the department of transportation received many letters regarding only allowing animals that are specifically trained such as guide dogs, it is working towards forming and implementing a much more flexible policy regarding emotional support and service dogs. Several cases have been reported where untrained animals, service dogs, and support animals have attacked airline employees.

Despite the fact that these laws are specifically made for mentally disabled people who need emotional support to calm themselves down, an airline is not obliged to cater and accommodate every type of animal.

First of all, to get your animal on a plane, you need a 100% valid and legitimate letter for your ESA so that no airline can deny your request or claim your letter to be fake.

Remember, you don’t have to just prove the need for an ESA but also give a notice to the airline. If your ESA is approved by the airline to accompany you, you still have to fulfill their requirements.

Passengers traveling with emotional support and psychiatric service animals must complete the required documentation at least 24 to 48 hours before the flight.

Here is the bad news!

An airline reserves the right to deny your animal access to the plane if it is not suitable for traveling in the cabin. Airlines are not obliged to accept wild and exotic animals like snakes, alligators, squirrels, other reptiles, or birds.

However, a well-behaved emotional support dog or a cat and even miniature horses, rabbits, and hamsters will always be welcomed to travel by their owners in the plane cabin.

So, no weird animals are allowed!

US Government Airline Policies regarding ESA

Since people are confused about taking their ESAs to flights and both the ESA owners and the flight attendants do not know what to do about it. To clarify some doubts and to give clear guidelines, the Department of Transportation (DoT) has issued some information and policies about the matter.

The following are the updated policies that DoT has given to the airlines.

1. Airlines are obliged to accept Certain Kinds of Exotic ESAs: The department still insists on accepting dogs, cats, and miniature horses as service animals. However, the airline can still deny some unusual and dangerous types of ESAs like reptiles, rodents, ferrets, and spiders but it cannot deny transport to other species.

2. Passengers may Have Extra Procedure before Boarding the Flight: The traditional service animals do not require to take any extra measures or go through any extra procedure. In case the animal is unusual but still fulfills the requirements, the passenger may have to notify the airline about boarding with the animal. They need to come to the airport personally to ensure that the animal could travel and be transported harmlessly. They further need to check in at least an hour before other people. Besides a valid letter, the airline cannot force anyone to submit anything extra or additional.

3. The Owner must Provide the Animal’s Medical Record: Though the airline or the airport cannot ask for any additional forms, they can definitely ask for the ESA’s medical records. The owner must provide the vaccination and training proof of his animal. Interestingly, under the recent policies, airlines cannot ban pit bull types of dogs, provided they are well contained and not a threat to other passengers.

4. The Animal must have a Reasonable Carrier or Way to Travel: This includes the way the animal will be traveling. This reasonable carrier includes anything that is used to contain and control the animal while taking care of the comfort of other passengers.

5. Nothing more than 3: According to the guidelines given by DoT, a passenger can travel with one ESA and up to three service animals. Some airlines have objected to the number but DoT holds its stance by stating that “if 10 qualified individuals with a disability each need to bring an ESA, then… the airline must accept all 10 ESAs, so long as the ESAs are sufficiently trained to behave in a public setting.”

Fill out our simple questionnaire and find out if you qualify for an ESA! If you do, get an ESA letter within 24 hours and enjoy air traveling with your emotional support animal without any hassle.

Which airline announced a ban on emotional support animals?

It is Southwest Airlines. Starting on March 1, 2021, only trained service dogs are allowed to travel on Southwest Airlines flights. They have joined other major U.S. carriers in banning emotional-support animals onboard flights.

Can airlines ask for proof of emotional support animals?

What animals can not be emotional support animals?

Why are airlines no longer allowing emotional support animals?

Airlines are no longer allowing emotional support animals freely because there have been multiple accidents where the ESAs have harmed people on the flight or other passengers have complained and faced issues. Moreover, some people misused the ESA laws as well.

Airlines that allow emotional support animals on flights in 2022 are as follows:

Effective March 1, 2021, Southwest will only carry trained service dogs and will not transport emotional support animals. Customers should complete a form before they board their flight. They can find the form both on the airline's website and at airport locations.

How To Get An Emotional Support Animal

What Is An Emotional Support Animal