Dog Hiccups - Causes, Ways to Fix It, and Things You Should Know

Home » Blog »Dog Hiccups - Causes, Ways to Fix It, and Things You Should Know 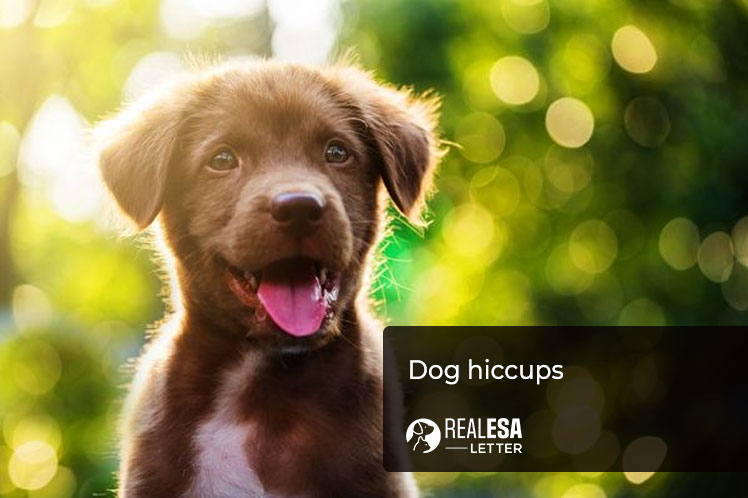 Dog hiccups are really cute and watching a puppy having a hiccup is cuteness overload. Dogs having hiccups is normal and just like humans’ hiccups, they could be caused due to a number of reasons.

Many dog owners, and especially the new dog owners, often do not know what is happening with their canines.

These are common and nearly every dog has them sometimes. Usually, hiccups happen when the dog is having food too fast or drinking water. It can also happen before the dog is off taking a nap. These are more common in puppies than adult dogs and they usually last a few minutes.

However, in case your dog is having excessive hiccups, it could be a sign of some health issue.

Know all about dog hiccups in the blog.

Dog Hiccups Explained - What are they?

Like in humans, dog hiccups occur when the diaphragm has involuntary and uncontrollable contractions and spasms. The diaphragm is a sheet having internal muscles.

It separates the abdomen from the chest. It is the key muscle that is involved in respiration. It contracts and moves downwards when a dog breathes in and it relaxes when it releases its breath.

Usually, the movements are smooth and normal, and sometimes when the muscles spasm, hiccups happen.

How Long do Dog Hiccups Last?

Usually, the hiccups last for a few minutes and everything goes back to normal. However, in some dogs, the time could be extended and this could be a sign of an underlying health issue.

At first, the sound could be scary for the pet owners but, mostly, they are harmless. The diaphragm spasms involuntarily and causes the ‘hic’ sound.

‘Why does my dog get the hiccups so much?’

Dog hiccups could be caused due to a number of reasons. Usually, the reasons are not very serious as, most often, it happens due to unintentional and uncontrollable contractions of the diaphragm.

This is quite common among dogs but sometimes the condition could be indicating a serious underlying health condition.

Hiccups in Adult Dogs - What are the Causes?

Since adults and older dogs have a developed nervous system, they get hiccups occasionally. However, if you notice that your dog has repeated bouts of hiccups then consulting a vet would be better.

Sometimes, dog owners mistake focal seizures and reverse sneezing as hiccups. To avoid any such situation, it is important to have complete information.

‘What gives a dog hiccups?’

Some common causes of hiccups in adult dogs are anatomical changes in the diaphragm. Electrolyte anomalies or health conditions like kidney diseases, nervous system diseases, and chronic gastric issues could also cause hiccups.

Hiccups in Puppies - What are the Causes?

The puppies are still in a growing stage and this is why they have more hiccups than the adult dogs. They get excited about food all the time and they try to devour every last bite in their bowl.

Due to their excitement for food, they swallow rather quickly and, in the process, they swallow some air also. This air could cause dog hiccups after eating.

Usually, rolling your puppy gently from side to side is enough to stop the spasm.

In some cases, these cute hiccups could be a sign of a more serious health issue. Below are some common possibilities of hiccups in puppies.

Parasites - parasites could also be the causes of hiccups in puppies. In case your puppy is having hiccups for an extended time, accompanied by vomiting, take him to the veterinarian immediately.

Gastric Issues - some of the common symptoms of gastric issues are diarrhea, vomiting, and bloody stool. This could also be a reason for hiccups in puppies and there are other gastrointestinal issues that your puppy could develop.

Luckily, most of the conditions could be treated but you will need to diagnose them correctly.

Respiratory Issues - some of the common symptoms of respiratory issues in puppies include sneezing, coughing, wheezing, and discharge from the nose. Puppies are exposed to a number of respiratory conditions like bronchitis, pneumonia, and heat stroke.

These conditions could be life-threatening and this is why it is important to monitor your puppy properly. Sometimes, adult dogs and puppies could have dog hiccups after sedation also. Some medicines could cause a hiccup-like reaction.

Besides eating or drinking too fast, dog hiccups during sleep also. Usually, this happens when the dog or puppy is in the REM sleep phase. In this phase, the body is most relaxed and the sleep is at its deepest.

Puppy owners could try some home remedies to stop doggie hiccups of your puppy.

‘How to stop dog hiccups?’

Usually, dog hiccups go on their way. To cure hiccups of your dog, try the following methods.

Hiccups are quite harmless but you must not let them go unnoticed if your dog has frequent and prolonged hiccups.

Taking Your Emotional Support Animal Along for the Ride

Are you qualified for an emotional support animal? Learn how an ESA letter can help you!

Visit the supermarket with your ESA for some bonding time!