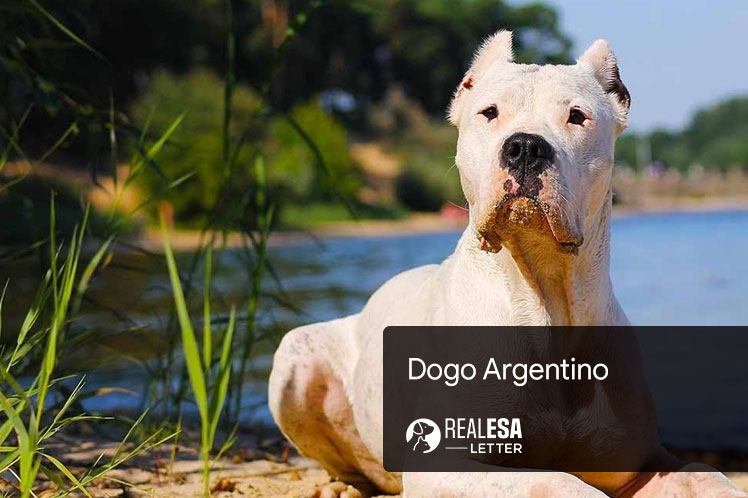 Although Dogo Argentino has supreme hunting skills, this dog can be a loyal companion and reliable protector as well. So if you are looking to get yourself a friend disguised in strong looks, Dogo Argentino can be the right choice.

Continue reading the article to know everything about this dog breed before you get one for yourself.

The origin of Dogo Argentino lies in the province of Cordoba in the Republic of Argentina. This dog breed was developed by Dr. Antonio Nores Martinez in 1928. His love and passion became the basis of creating this fearless furry creature.

The crossbreeding was done methodically of different dog breeds, including Great Pyrenees, Pointer, Great Dane, Boxer, Spanish Mastiff, Bulldog, Bull Terriers, and an extinct breed Dog of Cordoba. This crossbreeding gave birth to a healthy, fearless, and bullish hunter who had stamina and was perfect to be called a “protector.”

Although this breed was developed for fighting, it became a significant companion of Dr. Martinez in all his hunting trips as the dog demonstrated terrific skills. The adaptation capacity of this dog breed made him a noble companion and a loyal protector of those who loved him.

The remarkable strength, amazing sense of smell, and bravery made him best to hunt wild boars, pumas, and peccaries. In 1973, because of the tremendous efforts of Dr. Martinez and his successors, the Dogo Argentino was accepted by FCI, becoming the best Argentinian breed.

The Dogo Argentino is a powerful and athletic dog breed with a strong head supported by a thick and elegant neck. Due to chasing and hunting traits, the Dogo has a muscular body with a good nose and a great lung capacity. The stamina of Dogo Argentino is remarkable, making this breed powerful and intelligent. This dog is short in height and a single white coat with black spots on the body.

The Dogo Argentino dog is of friendly nature that can be a very good guardian of your home and family. He can be a playful mate for your children and a strong protector at the same time. Dogos are extremely intelligent, so they can be trained. You just have to be consistent and firm with them.

With the right owners, these dogs can be really submissive and friendly to humans and other animals. In contrast to this, Dogos are trained for rescue and police assistance as service dogs and even as a guide for the blind because of their strength.

The nutrition of the Dogo Argentino depends on its size. Adults need to be fed formula that will suit their digestive system. Some dog-food brands offer formulas according to the size, height, and weight of the breed to meet their nutrition level.

The best thing is to get your vet’s opinion on the food that should be given to the Dogo Argentino. Make sure to give your Dogo clean and fresh water along with the food.

Dogo Argentino is a healthy dog breed. They tend to live about 9 to 15 years. However, there are some genetic health issues that are observed in the Argentino species. On a minor level, the most common problems include Glaucoma and laryngeal paralysis. While the major issues, being a crossbreed of Boxer and white Bull Terrier, there can be deafness, hip dysplasia, and Hypothyroidism.

When getting a Dogo Argentino, make sure to get the following tests done:

To keep the Argentine Dogo active and healthy, plenty of exercises are required. Arrange playtimes and take your dog for walks in the park to ensure health. Occasionally, set indoor activities and use props to train your Dogo and have a good time.

Hygiene and grooming are as important for health as exercise and proper diet. Not only humans but animals require these things as well to look and feel good. If you are owning a Dogo Argentino, spend some time weekly on the grooming. Luckily, it is easier to groom your Dogo as they are single coated.

Either take your dog to the salon for the grooming or do it yourself at home. Occasionally bathe your dog, use dog nail clippers to make sure that the nails are trimmed, the ears are clean, and the teeth should be brushed. It is important to keep in mind that bathing them can not be an easy task. It is better that you take your Dogo to the expert for bathing and cleaning purposes.

Dogo Argentinos are a miraculous breed. These dogs have so many unique qualities that none other breed has. Apart from having great strength and being a loyal guardian, there are a lot more interesting things to know about Dogo Argentino.

Many clubs, including the following, recognize Dogo Argentino:

When participating in competitions like obedience and tracking, Dogo Argentinos achieve the best results as they have a sharp nose, hunting skills, and a brilliant mind. It is the primary reason why Dr. Martinez made Dogo his companion in all his hunting trips.

As Dogo Argentinos are tough and full of strength, they are often trained as police and military dogs. Their excellent assisting abilities make them great guides, therapy, rescue, and search dogs.

Being an aggressive breed, the United Kingdom mainly permits people to put their Dogos on a leash like Pit Bull Terriers. While in other countries like Canada, Turkey, Iceland, and Australia, the possession, breeding, and selling of Dogo Argentino is completely banned.

Dogos Argentinos are sensitive to extreme weather. When overexposed to the sun, Dogos get sunburn due to short hair. Similarly, keeping them in freezing weather can be equally damaging for their health.

Although Dogo Argentinos can be really friendly and submissive, this dog breed is considered to have one of the strongest bite forces. The strength of their bite is measured as 500 psi because of which they hunt down pumas and boars effortlessly. The powerful bite makes this breed an expert and tracking down wild animals.

People often confuse Dogo Argentino with Pit Bull as their facial structure resembles. The fact is, they are different and an Argentino is not a mixed breed with Pit Bull. The Dogo is a Mastiff breed because of which he is called Argentine Mastiff.

Moreover, both dog breeds are strong and aggressive in nature, the Dogo Argentino is considered stronger as it stands 27 inches tall and more muscular.

When it comes to training both the breeds, a Dogo Argentino requires a more disciplined approach than the Pit Bull. Including this, the life expectancy of both dogs also differ. Pit Bulls tend to live between 12 to 16 years, while Dogo Argentinos live around 9 to 15 years.

Getting a Dogo Argentino

You can find a Dogo Argentino in a rescue or shelter house easily. In addition to this, an expert breeder can also assist you in finding and getting a Dogo as your pet. No matter which way you choose to go, there are certain things that should be kept in mind.

Finding the right breeder will lead you to find a good Dogo puppy. Only an expert breeder will help you in the health screening process of your dog. There are several reputable breeders in the business that are experienced and have good knowledge about the Dogo’s health, temperament, and its likes and dislikes.

There are other options available to get a Dogo Argentino as well. You can adopt one of these adorable creatures from shelter houses or rescue organizations. For this, you just have to reach out to them, which can be done in the following way:

When getting a puppy or an adult Dogo Argentino, it is essential to be sure of a few things before you take him home:

Another thing that confuses people when they step out to get this dog is its cost. Many breeders and shelter houses ask for handsome amounts for this dog breed while others sell them for cheap. Purchasing it over or under price can have consequences.

Usually, adoption centers and shelters that ask for lower prices compromise on the animal’s health which should not be an option for the buyers. On average, the Dogo Argentino costs between $1000 to $2500.

So when you decide to get an Argentino, ask a veteran or a professional breeder about the right price so that you can not get scammed.

Dogo Argentinos can be the best emotional support dogs as well. To get one for yourself, all you need is a legit ESA letter from a mental health expert. There are many legitimate companies out there that provide 100% authentic letters like RealESALetter.com. Just decide on the breed before you ask your doctor to prescribe you the support of an animal.

Why is Dogo Argentino banned?

Dogo Argentino is an aggressive breed due to which Canada, Turkey, Iceland, and Australia, has banned the possession, breeding, and selling of them.

Is Dogo Argentino legal in the US?

Dogo Argentinos are banned in a few states of America, such as Aurora, Colorado, and New York City. Due to their aggressive nature, people own Dogo Argentinos for fighting purposes, which is illegal as well.

Dogo Argentinos are not naturally social, but they can be friendly and sweet around their owners and the people they like. As they can be excellent guard dogs and calm around their family members, they can be considered as family dogs.

Why is Dogo Argentino banned in England?

The Dogo Argentino is a dominant tempered dog that can get extremely aggressive at times. Due to its unfriendliness with other animals and people, they are banned in England.

Is Dogo Argentino a Pitbull?

The Dogo Argentino’s face resembles a Pitbull, but it is not a mixed breed of it. Dogo Argentino is a breed derived from Mastiff because of which it is also called Argentine Mastiff.

Can a Dogo Argentino kill a Puma?

Dogo Argentinos can kill pumas. Their muscular body can easily bear the damage caused by claws and teeth, so they are amazing fighters. Although a fully grown male puma is strong and can defend itself well, it can be killed by these dogs.

Is a Dogo Argentino stronger than a Pitbull?

Generally, Dogo Argentinos are taller and stronger than Pitbulls. They both are muscular and extremely powerful, but the strength of Dogo Argentino dogs is remarkable.