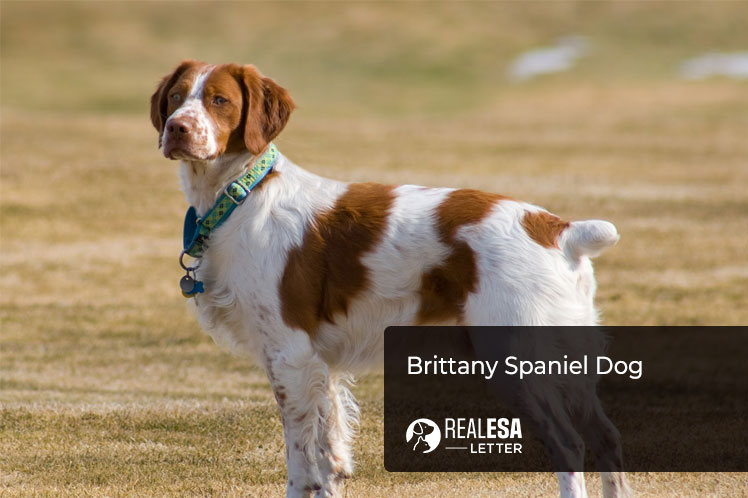 Unlike other dog breeds, Brittany Spaniel was originally bred as gundogs or bird hunting dogs on both sides of the Atlantic. As a sporting dog, they make an affectionate, intelligent, and playful pet for families with active owners.

Such dogs need enough attention and time for training and hunting. Thus, they require excessive exercise and love to enjoy adventures with their families. Have a look at this comprehensive guide about the Brittany Spaniel dog to know more about its history and other facts.

Brittany Spaniel took his name from the Celtic area of northwest France. It was once an independent kingdom where Brittany lies across the English Channel from Wales. For a long time, there was a trade going on between the two countries. Dogs were a part of that commerce.

It is believed that the Brittany and Welsh Springer Spaniel had some common ancestors because of their coloring and other physical traits. The first record of this dog breed is visual, where the tapestries and paintings date back to the 17th century.

However, modern Brittany started to take shape in the mid-1800s in Pontou. They were the result of a cross between a white and mahogany female owned by a French hunter and a lemon and white male dog.

In return, they produced two pups, where one of which was considered to have hunting ability. He became a popular stud in the area. It resulted in a pointed, retrieved, and bob-tailed dog. The locals of that area were fond of these dogs for their agility flyball, speed, and willingness to take action.

At the same time, field dog shows became popular in Europe and Britain. Here, Brittany moved effortlessly from the field to ring. Thus, it was recognized as a famous breed in France in 1907. The very first French Brittany registered in the state was a white and orange dog named Boy.

Nevertheless, until 1931, this breed did not make it to the United States. But soon, they became known and gained popularity. In 1934, the first Brittany registered with the American Kennel Club was named Edir du Mesnil. Later in 1942, the American Brittany Club was established.

Like other breeds, Brittanys also faced a decline after World War II. Similarly, it also affected the breeding of this dog in France. Following this, the French breeders decided to begin the production of Brittanys after the war.

The gene pool was depleted throughout Europe. Even today, the black color is not accepted in Canada and the US, but it is accepted in all other states. For many years, the Brittany Spaniel breeders wanted to eliminate the word “Spaniel” from the name of the breed. It is because Brittanys are pointing dogs and not flushing ones like Spaniels.

With this, in April 1982, the AKC Board of Directors approved changing the name of the breed. However, they are still known as Brittany Spaniels in some countries. Today, this dog ranks 31st among the 155 breeds registered by the AKC.

The following are some common physical attributes of Brittany Spaniel.

Brittanys are alert, happy, curious, and independent dogs. As a pointing breed, they respond well to their owners in need of pleasing them. They can often be single-minded when it comes to birds, but they are not focused on the feathered prey. Instead, they enjoy spending time with their families.

Moreover, this sporting breed love to hunt, run, scout, and play but is very sensitive and responsive to human direction. The breed’s temperament can be affected by several factors, including training, socialization, and heredity. Also, the Brittany Spaniel puppies with nice temperaments are playful and love to be held by people.

Like other breeds, these dogs also need early socialization and exposure to different people, sounds, experiences, and sights. When they are young, this training ensures that a puppy grows up to be a well-rounded dog.

Similarly, they can be enrolled in a puppy kindergarten class. Regular meetups with the visitors and taking them to parks or stores allow the Brittanys to enhance their social skills. They are quick learners and can be taught basic obedience. However, make sure to be consistent and not harsh while training.

This dog breed is suited to a household with active owners who can take time to train and hunt with the dogs. As Brittanys are restless and more prone to barking and roaming, they must have a fenced yard to run in. Therefore, they are not united to a city or apartment life.

Moreover, this breed loves companionship and can easily get separation anxiety if left alone for more than a few hours. They also go well with children along with other dogs and cats if introduced at an early age.

They are good pets as long as they receive mental and physical exercise daily. In case they do not get sufficient exercise, they become destructive. So the major requirement is an abundant exercise involving at least one hour of exertion, outdoor adventures, and long walks.

Brittany dogs require a healthy diet that won’t lead to obesity and support the bone structure and muscle tone. Feeding them with the right kind of dog food allows the owners to enjoy their wonderful personalities for many years.

Moreover, this breed needs a lot of carbs and proteins for energy. For maintaining an athletic tone, look for foods that are high in protein and fatty acids while low in calories.

It is recommended to feed them with 1.5 to 2 cups of high-quality dog dry food every day. It must be divided into two meals. Keep in mind, the better the quality of food is, the more it will nourish your dog.

Brittany Spaniel dog breeds are more prone to some genetic health conditions. These may include the following:

The cost of buying a Brittany Spaniel depends on the following factors.

The average cost of this dog breed is $900. You should also expect to have a budget of around $1,500 to $6,300 for the puppies with top breeder lines and a superior pedigree.

It is important to calculate the annual cost before buying Brittanys. This may include the price of food, vaccines, vet bills, nutrition, dental care, training, and other supplies. All these items can cost about $500 - $2,000 in the first year and then $500 - $1,000 afterward.

Here are some interesting facts about the Brittany Spaniel dog breed.

Because of their sweet personality, loyalty, and the fact they are easy to train, Brittany Spaniel makes wonderful ESAs. Moreover, their higher activity levels make them a perfect fit for a family with kids. This is how they can burn out their energy with someone who wants to have a companion for their walks.

It is better to adopt a dog from Brittany Spaniel rescue or shelter groups. Also, consider a reputable breeder if you are looking to buy this breed.

It is really hard for mentally and emotionally disabled individuals to find a more loyal companion than these dogs. Thus, to adopt them as your emotional support animal, get a valid letter from a mental health provider.

However, you can also contact us at RealESALetter.com if you need a letter within 24 hours.

What is the difference between a Brittany and a Springer Spaniel?

Here are the common differences between the two dogs:

Brittanys have a sensitive nature and are usually not aggressive to other dogs and cats.

How smart are Brittany Spaniels?

Brittany Spaniel is an extremely intelligent, obedient, and affectionate dog. They are known for their vibrant and enthusiastic temperament to please their owners.

How do you potty train a Brittany puppy?

You can potty train your Brittany puppy in the following ways.