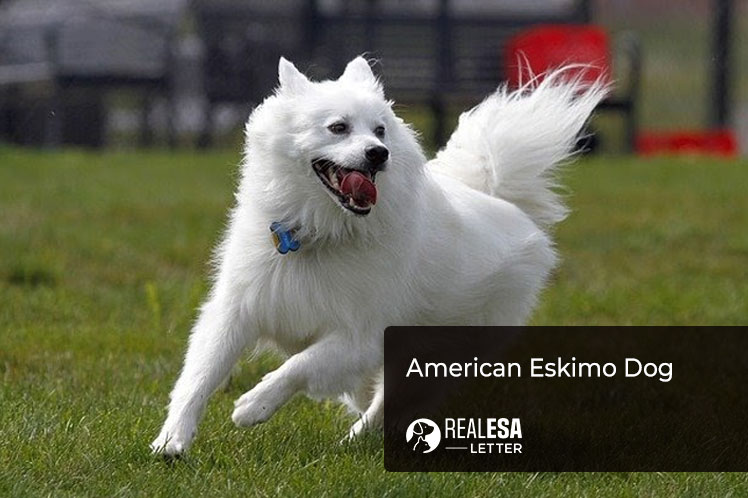 American Eskimo Dog or Eskie is sometimes called “the dog beautiful” by admirers. With his fluffy white coat, it looks like that he came from an igloo. However, he has a very different origin.

Therefore, this dog breed is not from America but originated in Germany and descended from the German Spitz. Also, Eskie keeps its owners on their toes with high-energy antics. Moreover, this breed is a perfect balance of brains and beauty for the right owner.

If you want to adopt this breed for an emotional support animal and learn more about this breed. Therefore, continue reading this blog and know everything about American Eskimo.

In the 1800s, the German immigrants came to the United States, and they introduced Americans to the spitz breed.

Moreover, the White Spitz dogs were first brought by German settlers to America, and despite their name, they have not related to the Eskimo culture.

This dog breed is an intelligent dog and was considered as a multi-purpose working dog of the farm. They have the best herding instincts and a very obedient dog breed.

The American Eskimo Dog and Samoyed are the two breeds that look gorgeous and will catch people’s eyes walking down the street.

An American Eskimo dog is a playful breed that varies in size and can be available in three different sizes. Some people prefer larger dog breeds, so some prefer smaller breeds.

Here is a size chart of the American Eskimo Dog.

American Eskimo Dogs are sometimes described as “busy dogs” because they need a lot more exercise than other dog breeds. They are active, which means they will quickly learn new tricks. Also, with playful and amiable nature, they make an excellent pet for emotional support.

Below you can find a few physical traits of the American Eskimo Dog.

An American Eskimo Dog requires regular brushing and bathing. With their double coats, they need to be bathed and dried for a neat look. However, selecting the correct product is essential to achieve the best results. They need a gentle yet effective product to avoid the dog's coat from being damaged.

With bathing, brushing is also necessary to prevent the dog from becoming tangled. Also, the Eskies shed, so thorough brushing is essential to remove its dead hairs.

Also, apply the shampoo to the dog coat and build a healthy, strong, and manageable coat. Try to avoid using heavy conditioners and hot water; it makes their skill dull and damaged.

Some dog owners apply oil on the dog’s fur to prevent dirt and bacteria. Therefore, it is good, and it never makes its skin dry and irritated.

Moreover, like all other breeds, properly trim the nails of the American Eskimo Dog. Also, trimming the pads of the foot helps to give a good grip to the dog on different surfaces. It also improves the dog’s paws from cracks and rubbing. Check their ears and remove all the dirt.

Further, comb their skin at least twice daily during summer because this helps remove fleas and ticks more quickly than just waiting until after finding one or two on the dog.

The American Eskimo dog is an active dog breed, and it requires proper regular diets to stay healthy and fit. To maintain the dog’s overall health better, you must provide a good and well-balanced diet to them which includes organic dog food.

The below table shows which nutrients are safe for your dog.

The American Eskimo Dog is a healthy dog breed, and they have fewer health issues. However, it doesn’t mean that you do not take care of their health.

Here are some of the main health problems that the Eskies mostly face.

Therefore, you must provide the right care, exercise, and diet to your American Eskimo dog and prevent several diseases. Also, when your dog’s health is good, it will easily take part in dog sports competitions.

Further, routine appointments with the vet are a must, even if your dog seems to be in good condition.

American Eskimo Dog is determined and independent. Its nature makes them a joy to own as a pet. This dog breed is one of the most friendly, well-behaved, obedient, and easy-to-train Spitz breeds.

Also, this breed with protective nature is the preferred choice for a home with small children. They love to be around people, but if they are alone for a long time without any company, they get depressed. It also makes a good guard dog, and with little training, it will become the best ESA.

Furthermore, an Eskie is a good communicator who uses their eyes to show you what they want. For instance, if they want a toy, look at the toy and then look at you, signaling that they want to play. With their intelligence, this dog breed is easy to train for the right times to bark.

Another main thing about the American Eskimo Dog is they love to swim. Their double coat allows them to resist water. Therefore, they can swim without getting sunk.

American Eskimo Dog is very energetic and requires a robust workout. However, the duration of the workout is determined according to the size of the dog.

According to the size, the American Eskimo Dog price varies. However, its price starts from $800 to $1500.

Also, when you buy this dog breed, you should ask its owner about some things.

Therefore, keep these things in mind and try to buy from a reputable breeder that provides you all the information.

Here are some interesting facts about the American Eskimo Dog.

American Eskimo Dog is an excellent choice for the emotional support animal. This dog breed might be ideal for you due to its intelligence, loyal, polite, and highly protective nature.

This dog breed becomes your best friend for life once you create a strong bond with it. Also, they are friendly, cheerful, and work well with kids.

Therefore, if you want to adopt this dog breed, you have to apply for the ESA letter. For a valid ESA letter, simply consult RealESALetter.com .

How much does an American Eskimo Dog cost?

The American Eskimo dog is not dangerous and has been considered to be the friendliest breed of dogs. It is best for families with kids who can get a lot of love from their lovable pet. This breed also makes an excellent companion because they will always want attention.

Yes, like other dogs, American Eskimo also has a biting habit. Therefore, your dog should learn that biting is only appropriate for chewing on treats and toys and that humans are off-limits.

The American Eskimo dogs rarely smell unless they are dirty. However, you must keep them clean. Also, they love the cold climate and want to play in the water.