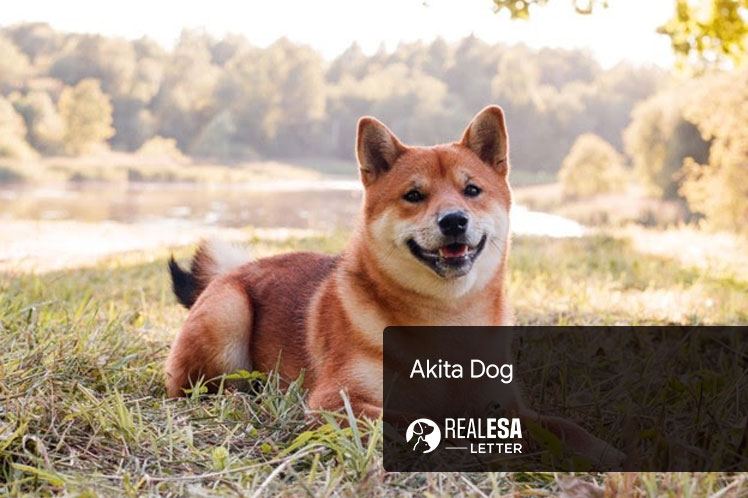 Are you looking for a dignified, courageous, and profoundly loyal dog breed?

You have reached the right place.

Akita dogs are one of the fiercely courageous, fearless, and powerful dogs breeds. They are initially used for guarding nobility and royalty in Japan. In this blog, you’ll get to learn everything about the Akita dog breed.

The Akita dog breed is well known for its loyal and devoted nature. These dogs do well with kids and all other family members. They never back down from challenges and do not frighten easily.

They are courageous, fearless, healthy, and loyal guardians to their owners. They are also respectful, affectionate, and amusing dogs when trained and socialized correctly.

Below are some characteristics of the Akita dog breed: 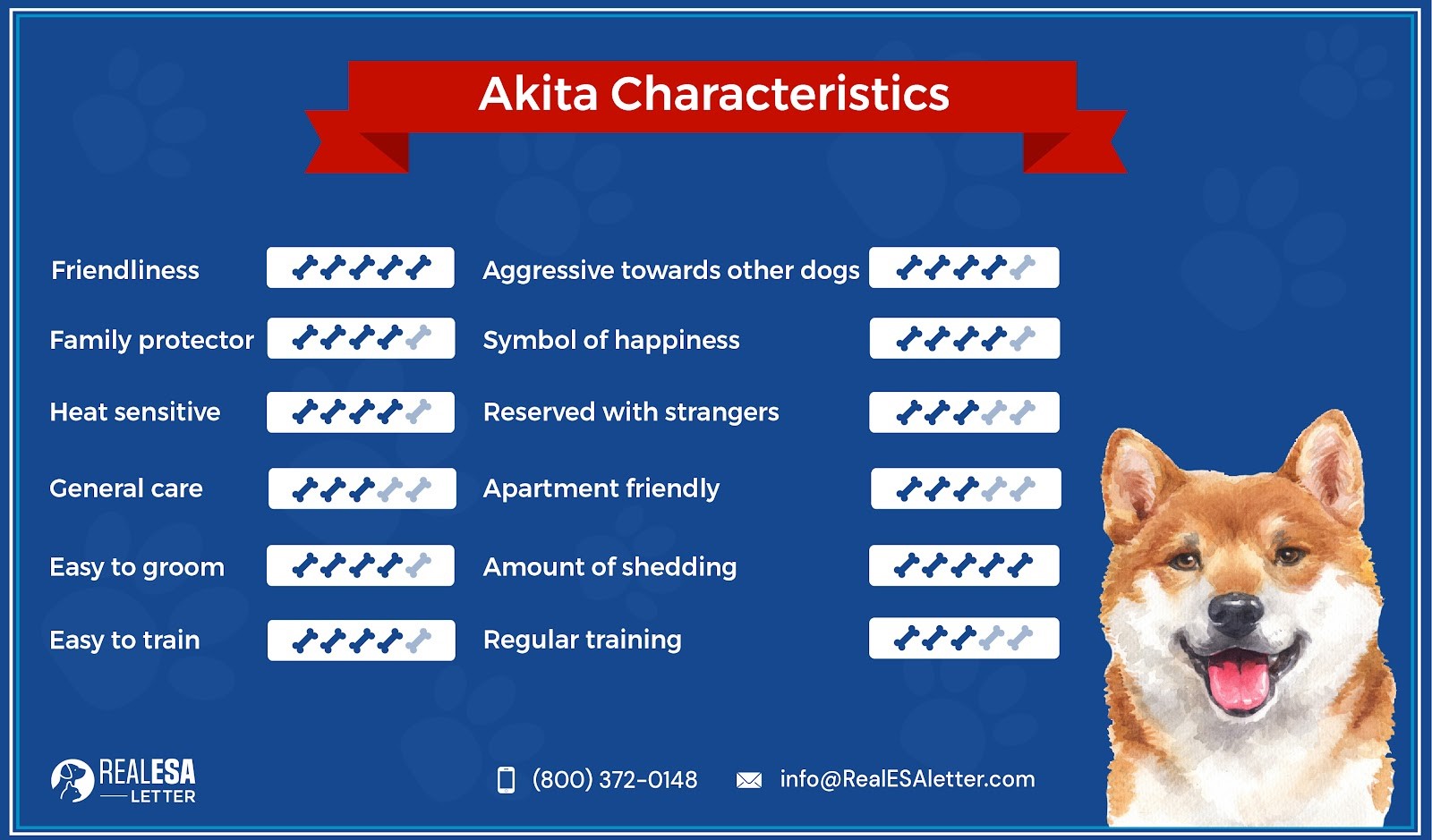 Akita Dog is a famous dog breed, originated from the snowy lands of Akita and Odate, mountainous regions of japan. They were the result of a concentrated 19th-century effort to restore seven native Japanese dog breeds. Their existence goes back to 1600 when they guarded the Japanese royalty and hunted big games like bears. In the beginning, they were involved in dogfighting, which was popular in Japan at that time.

The dog is the most renowned and venerated of the Japanese breeds. This valiant breed was introduced to America by Helen Keller - a deaf-blind social activist. The Japanese took her to Shibuya to show her the statue of Hachiko, an Akita’s pet dog erected in 1935. Hidesaburo Ueno, a professor, and Hachiko owner used the train for the commute from Shibuya station.

Hachiko used to accompany Ueno daily to the station to see him off and welcome him when he returned from work. One afternoon, when Ueno did not return - he died at work in Tokyo, Hachiko waited at the train station until midnight. After Ueno’s death, Hachiko continued his daily visit to the station for almost a decade until his death.

Hachiko used to come to the station every evening in the hope of his owner’s return. When the train arrived, and after all the passengers dispersed, Hachiko used to search the station carefully before walking back home. He was an example of loyalty that he named chūken Hachikō (忠犬ハチ公) "faithful dog Hachikō".

To honor his loyalty and love for his owner, a bronze statue was erected at Shibuya station after his death. The statue became a famous place where people come to pledge their love and devotion to their loved ones.

Keller was impressed by the loyalty and faithfulness of Hachiko and expressed her desire to have an Akita of her own. The Japanese loved this lady so much that they took her request to heart and presented her with an Akita puppy. She brought the puppy to America and named the “Kamikaze-go”.

Keller and kami bonded well on a 16-day boat trip home that kami became sensitive to Keller’s emotional states. When she cried from loneliness for her beloved teacher, kami put his paw on her knee. He presses his cool nose against her cheek to lick away tears. When they reached the United States, the newspapers proclaimed that Keller had introduced a unique dog breed to America.

Unfortunately, kami did not live very long and died at the age of eight months due to distemper. Keller wrote a letter to the Japanese government about the demise of kami. She wrote, “If ever there was an angel in fur, it was kamikaze. I know I shall never feel quite the same tenderness for any other pet..”

The Japanese were saddened by the unfortunate news of the demise of Kemi. They decided to give Keller another dog as an official gift from the Japanese government. Keller named this new dog “Kenzan-Go” because of the same sire and dame as kami. The dog arrived in America in July 1939, and Kellen nicknamed the dog “Go-Go”.

Knowing the fearless, devoted, and protective nature of Go-Go, American’s fueled the demand for Akita. However, due to World War II, the import of these dogs was prevented for several years. Still, by the end of WWII, people contacted soldier stations in japan with a request to bring Akita back home.

Gradually, Akita’s popularity has increased in the United States, so they established contacts with Akita breeders in japan. Akita was recognized by AKC in 1955 and moved into the Working Class from the Miscellaneous Class in 1972.

Akita is a double-coated, muscular, and large breed of dogs. Their big size makes them easily recognizable among other dogs. Here are the vital stats of this beautiful breed.

There is a big debate among fanciers whether there are two separate breeds of Akita. Until now, only the American Kennel Club (AKC) recognized them as two separate variations of the same breeds. All other dog breed clubs consider them as two different breeds with similar characteristics.

These breeds are distinguished on the basis of color, size, shape, and personality. 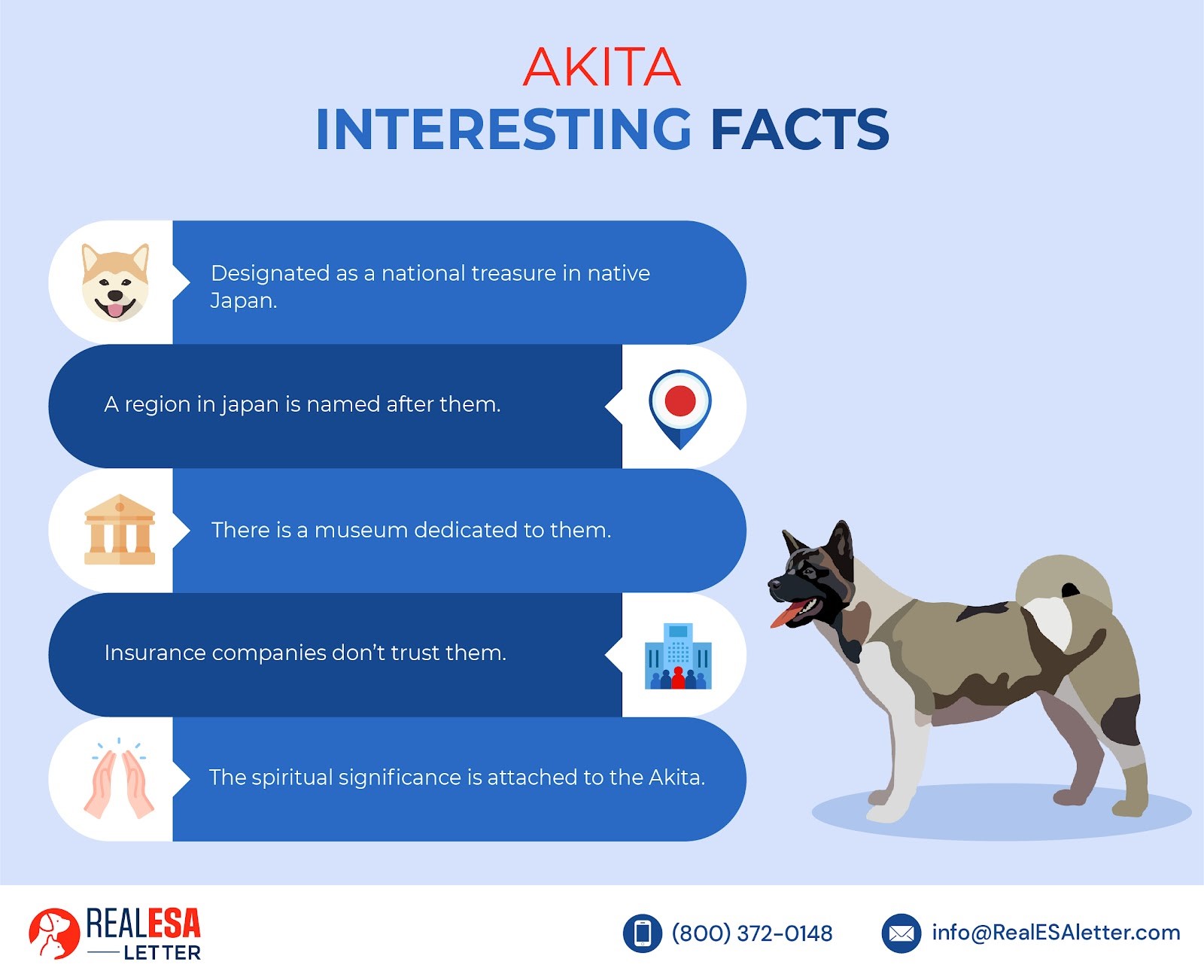 Like all other dog breeds, Akitas are prone to some specific health conditions. They can experience bloating, eye infections, cataracts, and many other diseases. Akita owners should learn to recognize the symptoms of any disease in their pets. Prospective owners make sure to work with reputable breeders who test their breeding stock for health concerns.

The most common health concerns of Akitas are as follow:

Comparing Akita and Shiba to know which one is the best?

Well, just so you know, no is better than the other. But, we will help you decide which one suits you better by comparing the similarities and differences of both breeds.

Check out the comparison chart given below. 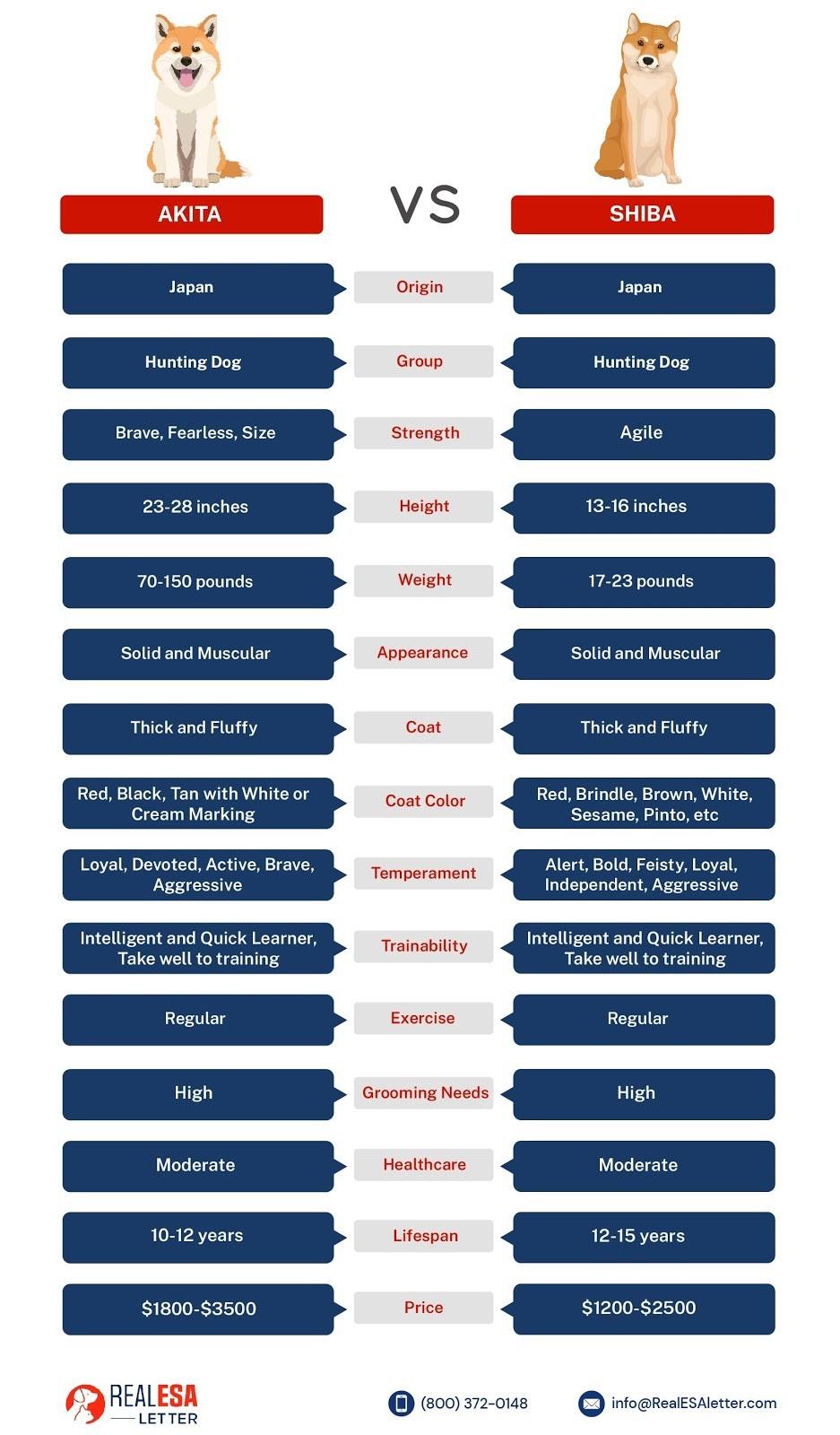 Also, they have a great history of loyalty and faithfulness. They have proved to be a perfect companion and an ideal partner. Hachiko’s dedication made him gain so much respect and honor that the Japanese erected a statue of him. This proves that the Akita is the best option for an ESA.

However, due to their hunting history, you need to provide them sufficient physical activities to keep them healthy. You can take them with you for a walk and do the regular exercise with them. It not just keeps you healthy but fulfills the exercise needs of your dog as well.

But, they are not good with young children and other dogs, so you need to think about that if you have small kids. They also do not get along with other pets, so you should avoid taking them to dog parks. They get along with other types of dog breeds but aggressive towards the same breed. So this is a little drawback about them; however, other than this, they are the best ESA.

If you are thinking of getting an ESA, you should consider Akita Inu or American strain. Just so you know, you need to have a legitimate ESA letter to make your Akita eligible to live and travel with you. An ESA letter allows you to live with your pet even in the no-pet apartment and take them to the no-pet zone.

If you need a real ESA letter, contact RealESALetter.com. We are a reliable and legitimate website that provides only real ESA letters written by certified mental healthcare professionals.

Get your ESA letter now!

Which breeds mixed with Akita?

There are many breeds mixed with Akita and the most common of them are as follow:

How dangerous is an Akita?

As Akitas were initially used for hunting and guarding the royalty in Japan, they have a wild side. If they are not trained properly, they pose a risk to the safety of the other animals and people. But that is common in every dog breed, they can become aggressive if not trained correctly.

Why do Akitas have a bad reputation?

Akitas are courageous, fearless, powerful, and dominant dogs. They have a bad reputation because of bad owners and bad breeders. They are large and muscular dogs and not suitable for everyone.

What states are Akita banned in?

Akita breed is banned in a few of the cities of the United States.

Why is Akita banned?

Akita has a reputation as an “aggressive dog” that is why they are banned in some of the cities of the United States. They are reserved with strangers and do not get along with other dogs.

Will an Akita protect his owner?

Akitas are natural guardians, they live as if their only purpose is to protect their owner. They do not need guard-dog training as they have this quality naturally. They have a well developed protective instinct.

Why is Akita so expensive?

Akita is a unique pure breed, originated from northern japan. They are expensive due to the following qualities: