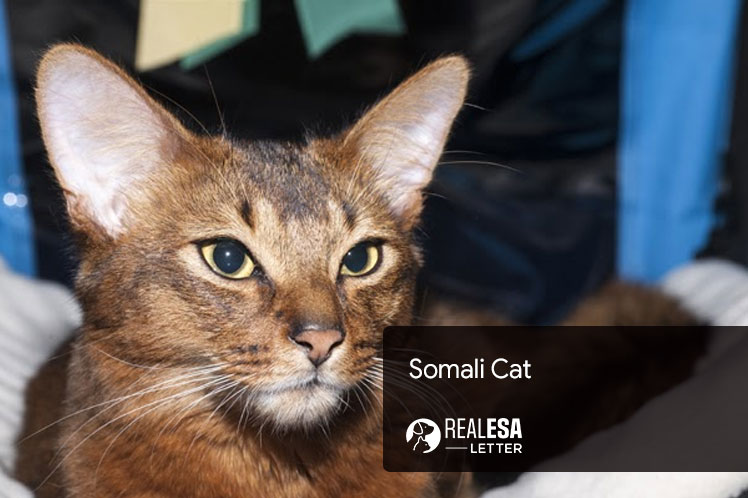 A Somali cat is a medium-sized muscular cat with a soft fine coat. This breed is often described as a long-haired African cat. These cats originated in Somalia and are a cousin breed of an Abyssinian cat from Ethiopia.

A Somali cat is well-proportioned, active, and a healthy cat that is famous for its playful nature. Unlike some other cat breeds, a Somali is an outdoor and independent cat. If you want the company of this beautiful breed, continue reading the article to learn about its origin, characteristics, and personality traits.

Somali cats have a very controversial history regarding which people have contradicting opinions. No one is precisely sure how Somalis appeared. Some people believed that the development of Somali cats was a spontaneous mutation in Abyssinian cats.

Others say that Somali cats’ origination took place in England when the breeders worked for an Abyssinian breeding program.

During World War I and II, due to the extinction of the cats, breeders were forced to mix Abyssinian bloodline with other breeds. It was to keep the Abyssinian lineage in continuation. In 1953, an Abyssinian cat named Raby Chuffa came to the United States from Britain, an ancestor of the Somali breed.

All American and Canadian Somali cats can be traced back to Raby Chuffa of Selene. When this cat was first brought to America, breeders believed that it would inherit the longhair gene to its kittens. However, breeders were shocked to see the difference in appearance in the kittens and refused to mention them as Abyssinian.

Some Abyssinian breeders were intrigued to see this mutation and were interested in the long haired Abyssinian breed. Initially, breeders looked down upon the development of Somali cats and refused to associate them with Abyssinians.

The U.S. breeder Evelyn Mague came up with the name “Somali” for its two Abyssinians, Lynn-Lee’s Lord Dublin and Lo-Mi-R’s Trill-By. In 1972 she founded Somali Cat Club to make it familiar among other breeds.

Somali cats are nothing like lazy breeds who will lie around in the house all day. Being the descendant of an Abyssinian cat, Somali cats are active and playful in nature. So if you are not ready to play with them and watch them go crazy in the house, do not get a Somali cat.

Somali cats are vigorous and animated who need to play most of the time. Watching their feline humor is extremely entertaining for everyone. These cats will play fetch and will run crazy after the ball.

Somalis are highly intelligent cats that are always curious and high-spirited. It is due to their nature that they get in trouble as Somalis love opening the cupboards and getting in them.Unlike their Abyssinian friends, Somalis are independent in nature but love to be around other humans and animals. They are extremely social, and people love their company because of their enthusiasm and activeness.

Unlike other cats, Somalis love to play alone as much as they do with their families. They will interact with their owners in a soft, quiet voice and want their attention when jumping from couch to couch.

In a nutshell, Somalis are a perfect family cat breed that is good-natured and extremely affectionate. If you are craving an entertaining furry company, getting a Somali cat will be the best decision.

Somali cats are famous for their beautiful looks and defined features. They have a medium length, well developed, and a muscular body. Their rib cage is round with a back slightly arched.

Somalis have a slightly round, modified head with a contoured brow and cheekbone. They have large ears that are alert and moderately pointed. Somali cat’s eyes are large and almond-shaped that are bright and full of expressions. The beautiful gold or green tint in the eyes provides depth and richness.

The coat of the Somali cat is one element that distinguishes it from other breeds. These cats have a double coat of fur that is extremely soft and fine. The coat is usually medium in length on the body and slightly shorter on the shoulders. Somalis have a unique bushy tail that is coated with long fur.

The ticked coat of the Somali cat comes in a variety of colors. Ruddy, red, blue, and fawn are the basic colors observed in the Somali cat breed. Due to the warm colors of the coat, a glowing effect can be seen on the bodies of the Somali cats. The color of the undercoat is usually clear and bright that matches the skin of the cat.

Somali cats are very affectionate and expect their owners to be loving in return as well. They like getting the due attention, love, and care from their loved ones. If you have a Somali cat as a pet, make sure to be concern about its health, diet, and grooming needs.

If you want your pet to be healthy, active, and happy, taking care of its basic needs is important. A happy pet will provide you with cheerful companionship that will be beneficial for you on so many levels.

Active cats require more energy to perform tasks than other breeds. To ensure a healthy mind and body, people should provide their cats with a nutritious and balanced diet.

Every cat is unique when it comes to food. Their preference depends on their age, size, and sex. On average, a Somali cat requires 41 different and specific nutrients for its growth and activity.

Another element that plays a significant role in the cat’s health is the quantity of food. Your cat should not be malnutrition, nor should it be obese. Get a diet plan from an expert to feed your cat at the right time in the right quantity.

You can go with the commercially manufactured food or with the one prepared at home under the instructions of a veterinarian. Moreover, you should avoid giving unlimited treats to your Somali cat as it will affect its body weight.

Somali is a healthy cat breed that is considered extremely active and full of energy. However, there are some hereditary diseases that are present in the cousin breed of Somalis, Abyssinian, and can be observed in this breed as well.

Like Abyssinian cats, Somalis can suffer from health issues as pyruvate kinase deficiency that causes anemia. In addition to this, Somali cats are also prone to progressive blindness, gingivitis, tooth decay, and renal amyloidosis.

When getting a Somali cat from a breeder, make sure that reliable tests were conducted to ensure that the breed is healthy and free from fatal diseases.

On your part, keep the cat’s weight under control and make sure to set up activities for your cat’s exercise. These active beings are outdoor cats that will run and jump around to stay healthy.

Moreover, if you notice anything strange about your cat’s health, including disturbed eating patterns and laziness, consult the vet immediately. No sign should be ignored as it can be a symptom of a serious disease.

As a Somali cat is double-coated with medium-length hair, they require daily brushing. This is to make sure that there are no tangles and hairballs in the body. Unlike other cat breeds with super long fur, such as Persian cats, it is easier to keep Somalis in good condition.

Using stainless steel or wired comb brush your cat’s body. Check for fleas and rashes on the skin as they can be the reason behind many diseases. Clean your Somali’s ears once a week and trim the nails as well.

The eyes and ears of the cat are very sensitive parts of the body that easily get infected. So they should be cleaned properly once in a while. There are professional groomers who can make your life easier. They can bathe your cat and take care of all the generic grooming requirements.

Difference Between Somali and Abyssinian Cat

Somali cats are believed to be a breed that originated from Abyssinian cats. Some breeders concluded that in the 1950s, Somali cats came into existence after the genetic mutation of Abyssinian with long-hair. Although there are no major differences between the two breeds, they still are considered separate groups on the basis of a few traits.

Abyssinians are medium-sized cats that weigh around 6 to 10 pounds. They are sleek yet muscular. However, Somali cats look heavier due to their fur.

Abyssinian cats require brushing once a week while Somalis need frequent brushing to keep their coat clean and maintained.

Both Abyssinians and Somalis are active and lively breeds. They are affectionate towards their families and are amazing as a company.

Somali cats are a very interesting breed that hides several intriguing facts about their personality in general. If you are fascinated by these cats, here are some unknown facts.

Seeing your furry companion happily play and jump around the house will help calm the patient down, making him deal with the condition better.

Somali cats are great to be around. Their cheerful and lively personality and childish activities are very entertaining and instantly put people in a good mood. Getting a Somali cat will be the best addition to the family.

You can purchase a Somali cat from a breeder, adoption center, or rescue center. The average cost of a Somali cat is $1000 to $1500, depending on how healthy the breed is.

When getting this cat, make sure that the necessary medical test or health assessment is done to ensure the cat’s health. If you want a Somali cat as your emotional support, you will require an ESA letter from a mental health expert stating your need for the animal.

Like its Abyssinian cousin, Somalis are a rare cat breed. Getting a Somali cat as a pet or emotional support animal will not be easier, so you will have to contact several breeders and adoption centers to find a perfect Somali cat for you.

Somali cats are not considered hypoallergenic. Due to its long fur and excessive shedding, this cat produces allergens that can be extremely dangerous for people who are allergic to pets and their hair.

Somali cats excessively shed around spring to get rid of their winter coat. At that time of the year, make sure to weekly groom your cat and clear out all dead hair from the body.

Why is it called a Somali cat?

The Somali cat breed is named “Somali” in reference to the African nation “Somalia”. Being a cousin of an Abyssinian breed, which connects Abyssinia, now called Ethiopia, and Somalia, the breed is named as “Somali.”