The Scottish fold cat was created by a genetic mutation in farm cats in Scotland. They are nothing that the Scottish Fold is named for their folded ears.

Among other cat breeds, they are the most friendly ones that love to participate with their owners in what they are doing. Moreover, this breed offers easy care and becomes comfortable with all the family members.

If you are looking for an intelligent cat pet with a hardy appearance, this breed is the ideal choice for you. Read on to get a detailed account of its history and characteristics. 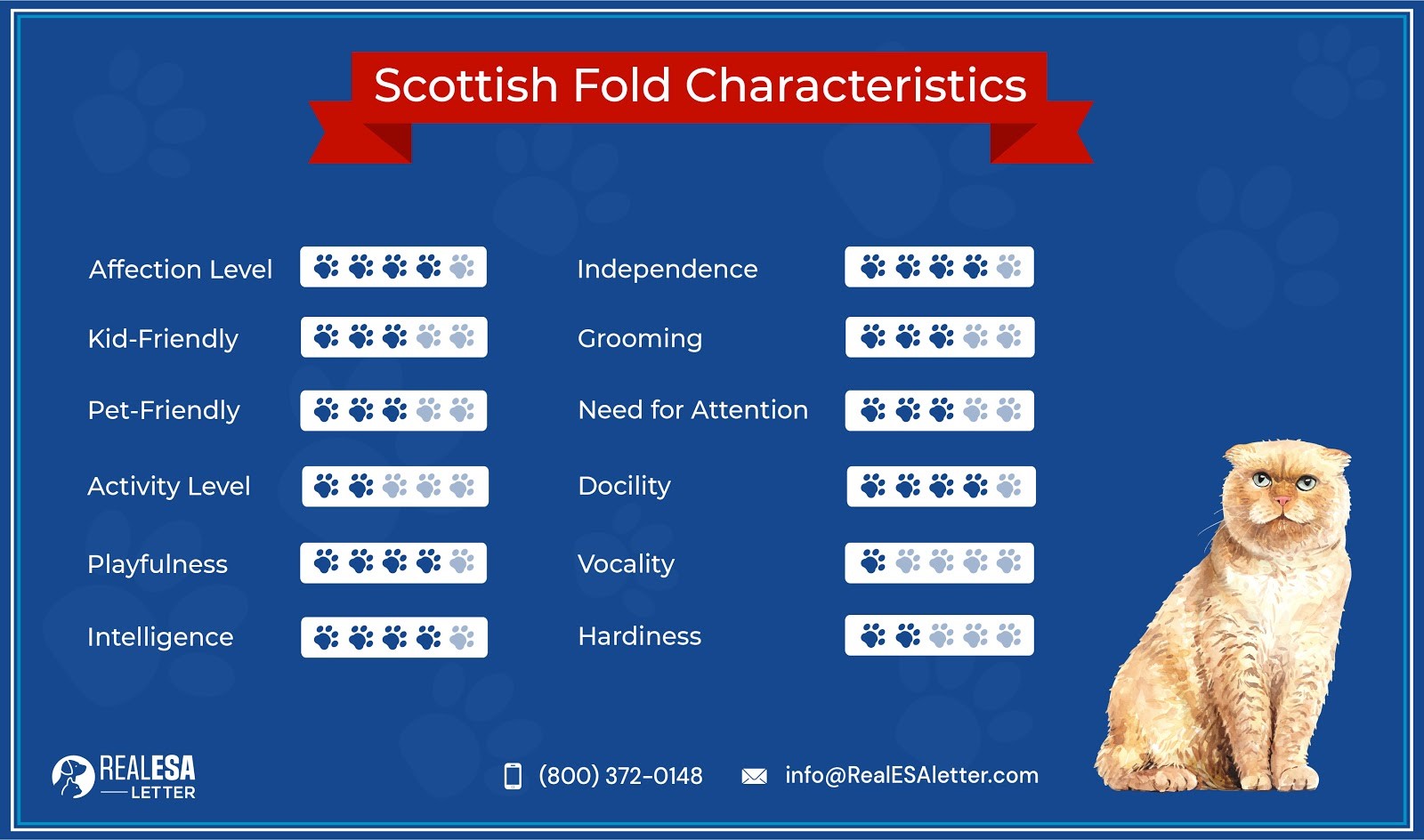 The Scottish Fold cat can trace its origins back to a cat named Susie. The white female farm cat was found on the McRae farm near Coupar Angus in 1961 in Scotland. It had unique, folded-down ears.

The British shorthair breeders named William and Mary Rose recognized this cat as a new breed. William asked the McRaes to buy the cat but was promised a kitten from the first litter.

Susie’s mother was a straight eared white barn cat, but her father was unknown. Thus, it was unclear whether Susie was one of the first kind or whether the folded ears were never noticed before.

In 1963, Susie produced two folded ear kittens, and William Ross was given one as promised. This kitten was a white beauty exactly like her mother, and they named it Snooks.

After being advised by Peter Dyte, a British geneticist, the couple started a breeding program. Here, they outcrossed the British Shorthairs and bred domestic cats. They realized that the folded ears genes were dominant, and it needs one parent only to pass this unique trait.

It was contended that any cat with this folded ear gene produced about 50 percent of the fold kittens. Previously, this breed was named Lops because of the lop-ear type of rabbit. Later in 1966, the name was changed to Scottish Fold to honor the country where the cat was found.

The same year the Rosses registered their cats with the Governing Council of the Cat Fancy (GCCF). The couple then started the struggle to get their folded cats accepted worldwide.

At first, the breeders were enthusiastic about this cat, but soon GCCF became concerned about the health conditions. Some of the potential conditions were ear infections, deafness, ear mite infections. Later these concerns were proven invalid.

Moving further, GCCF got worried about the genetic problems that were considered real difficulties. Consequently, in 1971, GCCF closed and banned the registration of the Scottish Folds. For this, this breed had to move to North America.

It was later accepted for CFA registration in 1973, and in 1977, these cats were given CFA provincial status. The breed also became a CFA champion breed in 1978.

In a very short period, the Fold got accepted as the most popular breed in all the North American cat associations in the United States. Nevertheless, until the mid-1980s, the longhaired version of this cat was not officially recognized.

It is widely believed that Suzie may carry this recessive, dominant gene for long hair. Also, the Persian cats used in early outcrosses may help to establish the long hair gene.

Currently, Scottish Fold Longhair has been accepted for the championship by many associations. But they do have a separate standard for this breed and call it Longhair Fold or Highland Fold.

Here the AACE, ACFA, and UFO call this breed the Highland Fold, and the CFF refers to the breed as Longhair Fold. The long haired Scottish Fold is considered a division of the Scottish Fold breed in the CFA and TICA. In contrast, the breed is called Scottish in CCA.

Here are some distinctive physical attributes of the Scottish Fold.

Scottish Fold cat breed is usually intelligent, soft-spoken, and adaptable to new situations and people. It is very loyal and forms a strong bond with one person in the house, and allows others to cuddle or pet them.

Similarly, this breed requires attention but on its terms. Though they are not demanding and clingy like other cats as they prefer to be near you rather than sit on your lap. They enjoy catching mice and keep their playful side into adulthood.

The folded ears of the cat are very expressive to what they listen to. They lay back in anger and prick up when a food can is opened. On the other hand, the fold in the ears becomes less pronounced when ill or upset.

These cats also have a habit of posing in odd positions. Moreover, they are smart and moderately active cats. They enjoy being left alone for hours.

Thus, it may not be the best choice for those who are home throughout the day or if you want to give them the company of another pet. But they do expect the owners to play with them after coming back home.

This cat breed requires proper care and grooming sessions. Below we have mentioned the ways for you to learn how to take care of your fold.

It is better to keep the Scottish Folds as an indoor cat only. It will prevent them from getting any diseases from other cats or being attacked by other dogs.

These friendly cats are an ideal choice for families with cat-friendly dogs and children. They love the respect and attention they get from children.

The Scottish Fold is a unique breed, but because of being domestic, its nutritional demands do not differ from other cats. They are a little less active as compared to others and are more prone to obesity.

An indoor cat diet or calorie-reduced recipes are perfect for this breed. Furthermore, the kittens should be fed a kitten diet until they are fully grown. You can also increase the water intake of your Scottish fold by feeding them wet food meals and dry kibble.

Scottish Folds are capable of learning tricks and like to play. The owners should provide them with mental stimuli to keep their minds sharp and occupied.

Similarly, you can engage them with friendly teaser toys such as interactive lasers, electronic motion toys, and catnip-filled mice to keep them entertained. Such toys challenge their intelligence.

Apart from this, positive reinforcement training sessions are also helpful to teach them to fetch. They basically enjoy anything that involves human interaction.

Scottish Folds have health problems that are genetic in nature. The following are the conditions that may affect this cat breed.

The price of buying a Scottish Fold ranges between $1,000-$2,000. However, if you plan to adopt one from the breeders offering Scottish Fold kittens for sale, it will cost you around $250-$500.

This breed has a variety of colors, shapes, and sizes. Thus, the price will depend on what kind of kitten you choose. There are many Scottish Fold rescues and shelter groups for you to adopt a healthy cat.

Here are some extra costs that come with buying a Scottish Fold cat.

Below-given are some interesting facts about the Scottish Fold cat breed.

Scottish Fold cats are a lovely breed that shows affection to your friends and family. However, they are more expensive than other breeds, but their beauty and rarity make them a worthwhile investment. With research and patience, you would find a perfect kitten for your lifestyle and budget.

Not all cat breeds make good emotional support animals. If your mental health specialist has prescribed you an ESA, make sure to get a friendly cat.

Scottish Folds can make the best emotional support cat if you are suffering from any mental health conditions. It may include depression, anxiety, and stress. Thus, to get a Scottish fold munchkin cat as a support animal, the first thing you need to do is to get an ESA letter.

It is a prescription that allows you to live or travel with your Scottish Fold without paying any charges or even in a no-pet policy area. Therefore, without wasting any further time, get a professionally written letter within just 24 hours by contacting us at RealESALetter.com.

1. Why are Scottish Fold cats banned?

The ban on the Scottish Fold is being introduced because these cats may develop serious health conditions. It is because of the genetic mutation that they are carriers of.

Yes, Scottish fold makes good house pets because they are very affectionate, talkative, and smart. They are indoor pets that get along well with kids and other animals.

Yes, Scottish Fold is an aggressive cat breed because it strongly relates to the British Shorthair. Such types of cats do not need that much care and love, and they don’t like petting all the time.

4. Do Scottish folds shed a lot?

Typically, this cat breed does not shed more than a regular cat. Thus, they do not require a lot of grooming, but their dense coat still needs weekly brushing and care.

Scottish folds can be vocal, but their voices tend to be on the softer side. However, they are less vocal than other cat breeds.