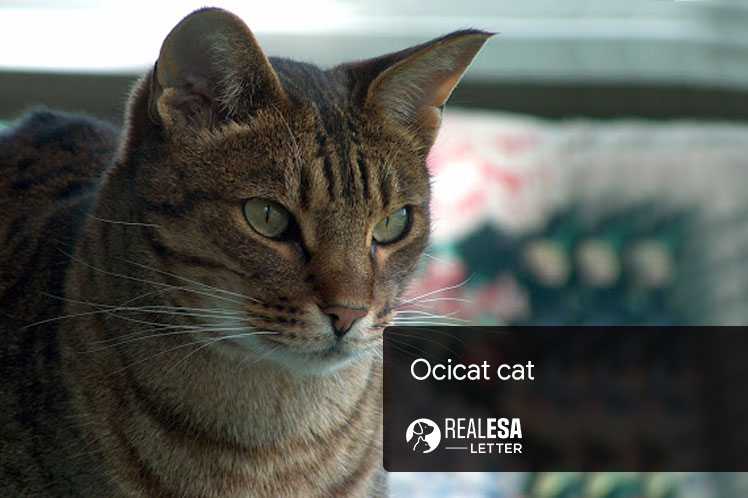 Some cat breeds are discovered naturally as wild. In contrast, others are relatively new breeds resulting from specific breeding experiments.

Getting to know different ways with which cat breeds come to exist is fascinating. Ocicat is that one cat with an interesting history. It is considered a dog in a cat’s body because of its sociable, gentle, and adoring nature.

Continue reading if you are interested to know more about this sweet North American cat breed with wild looks.

The Ocicat was created through crosses between an Abyssinian, Siamese, and American cat. A cat breeder named Virginia Daly in Michigan first bred Ocicat in the mid 20th century. However, the creation of this breed was a complete accident.

In 1964, she mated a Siamese female and an Abyssinian male with purebred Siamese to create a 3rd generation. Daly wanted to create a short-haired cat with interesting color pointing and markings. Consequently, Tonga was born with copper eyes and golden spots. He was a new breed and soon named ‘Ocicat.’

This breed was neutered and sold, but his legacy continued. An article about this cat was published in a Detroit newspaper that soon brought Dr. Clyde Keeler’s attention. He started researching the genetics of the breeding program.

He further added American shorthair cats to the mix breeding of pointed Siamese cats and the Abyssinian. As a result, more Ocicat kittens with wild looks appeared.

This new breed was registered with the Cat Fanciers Association, Inc in 1966. The cat also won the championship status in the club and became eligible for national and international cat shows.

Today, Ocicat is one of the popular cat breeds worldwide. Moreover, it is a domestic breed with no DNA of a wildcat. Other common Ocicat names include Savannah, Simba, Harley, Blaze, Coco, Mad Max, and Kitty.

Many people think that Ocicat and Bengal cats are the same as both have wild looks, dark spots, and similar appearance. However, these two cats are completely different. The following are the distinguishing characteristics of both cats.

The Ocicat cat seems to be wild but is sometimes known as the ‘Domestic Ocelot.’ The features of the Ocicat size that appear to be wild include the following:

Below are some other physical characteristics of this cat breed.

The temperament and personality of the Ocicat is unique. There is no clear link between its history or appearance and the behavior.

This breed looks like an aggressive or wild cat, but you cannot judge it from its appearance. Ocicat is a purely domestic cat breed. They are friendly and social, and affectionate pets to strangers and other animals. However, they are very sensitive and can act aggressively when feeling threatened.

Another important attribute of their personality is that Ocicats are highly intelligent. They are very easy to train, and you can also teach them to respond to their name.

Similarly, Ocicats need intellectual attention, so you should provide them with toys and play sessions. It will help them to stay active and engaged. However, they are neither independent nor clingy. They enjoy being with their owner but dislikes being scolded.

Keep in mind; this breed can live both indoors and outdoors. All it needs is a place where he is safe and away from wildlife or aggressive animals. Instead, they prefer to stay with cat-friendly dogs. They also tend to be very local, and the owners might be concerned about excessive meowing at night.

Because of their highly social nature, Ocicats can develop separation anxiety if left alone for a couple of hours.

Ocicat cats need regular grooming to keep their coat in good shape. It is also important to stimulate circulation and remove the shedding of dead hair. A good grooming session strengthens the bond between the owner and the cat.

Consider the following points while grooming an Ocicat breed.

The Ocicat cat breed needs proper nutrition where protein and fats come first. Dry cat food is also a good option as it makes the teeth and gums healthier.

Many people assume Ocicats are hypoallergenic cats, which is not true. However, it is listed as one of the top 10 non-shedding cats. Those having allergies to cat hair might get affected by this breed.

As cats don't drink a lot of water and sometimes get dehydrated. Thus, most veterinarians recommend wet food as it provides moisture to cats. Similarly, they also need amino acids like Taurine to deal with specific medical issues like kidney disease or obesity.

Ocicat cat breeds must be fed twice a day, but kittens need to feed after every few hours. It is because growing kittens need more vitamins, nutrients, proteins, and calories. Also, keep water in a clean and stainless steel bowl near the food.

Consider the following things while looking for high-quality cat food.

Lastly, it is better to consult a professional veterinarian to get the best dietary advice for your Ocicat.

The Ocicat needs daily exercise and interaction with people. You can also provide them mentally stimulating cat toys, scratchers, gyms, and daily walks on a leash. It allows them to lead a well-balanced life.

Here are some of the latest cat toys to keep your Ocicat entertained.

Fortunately, Ocicat is considered a strong and healthy cat breed. However, they are also prone to a few health problems. Mostly, these health concerns are associated with the Siamese, Abyssinian, and American Shorthair breeds. As Ocicat is descended from these thus, the cat owners should be familiar with the symptoms.

Here are some common health conditions that this breed might suffer from:

There are many cats in Ocicat rescue or shelters desperately in need of a good home. While adopting an Ocicat, ask questions and look for a good temperament. Similarly, while purchasing a breed, choose wisely. Make sure that the Ocicat kittens for sales should also be playful and curious.

Reputable Ocicat breeders usually belong to the Breed Clubs or council. They hold the kittens for 14 weeks until they are ready to adjust to a new environment. Furthermore, they ensure that the kittens are physically stable and have received all the initial vaccinations.

While searching for a breeder on the internet, be careful and read the reviews. It is because you only have 24 hours to return the cat if you find any health issues.

The Ocicat breed has been divided into two different categories in terms of price. These include:

The following are some interesting facts about the Ocicat cat breed.

Ocicats are considered a popular designer cat breed. They are extremely friendly, trainable, and affectionate. Moreover, they enjoy being with their owners. Thus, because of their unique personality, Ocicats undoubtedly make great emotional support animals.

If you are planning to get this cat breed, contact a reliable breeder. To get a support cat, you will need an authentic ESA letter from a mental health professional. It will make you eligible to live and travel with your ESA. Similarly, you can also adopt an Ocicat as a pet from different rescue homes and pet stores.

In case you want a valid and professionally written letter within 24 hours, contact us at RealESALetter.com now.

What is an Ocicat Patronus?

Ocicat is a small cat breed and one such corporeal form of the Patronus. Those with this Patronus are playful, intelligent, and independent. Moreover, they love to spend time with their families.

Do Ocicats get along with dogs?

Ocicats are highly sociable and friendly. Thus, they can easily get along with strangers, other dogs, and cats.

How can I tell if my cat is an Ocicat?

To identify an Ocicat Cat breed, look for the signature dark spots, large ears, and ears that resemble a wild cat.