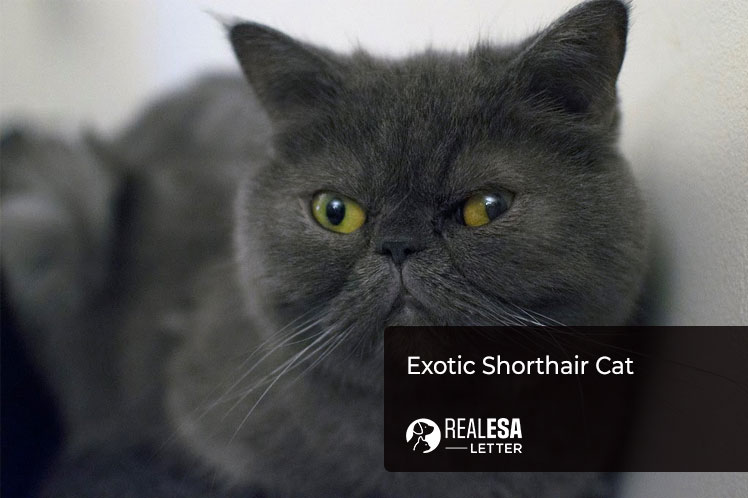 Unlike other cat breeds, Exotic Shorthair has only 50 years of history. It is also known as the Shorthaired Persian and is a popular breed.

This cat has a playful side but prefers to relax most of the day. Similarly, it also requires less grooming as compared to the Persian. Thus, if you want a Persian breed but are concerned about the time it takes to care for its long coat, then an exotic shorthair might be for you.

This sweet and loving breed has the personality and looks of a Persian. However, it has a short, dense coat that is easy to maintain. Have a look at the following guide to get a detailed idea of the Exotic Shorthair cat breed and its characteristics.

The birth of the black Exotic Shorthair began in the late 1950s. An American cat breeder Carolyn Bussey crossed a Persian cat with a brown Burmese that aimed to create a brown color Persian. In return, she ended up having cute black kittens.

She discussed the idea with the cat fanciers and believed it to be shorter-haired Persian. This breed had the same beauty and nature as the Persians, but they are easier to groom.

At that time, short-haired breeds were doing pretty well. The American Shorthairs breeders crossed these cats with Persians to produce better coats and attractive appearance. However, the Shorthair breed was losing most of its qualities that made it a distinct breed.

The breeders of these cats made all the efforts to portray that these new physical characteristics are naturally occurring. But the cat fancy associations had no option left except to end the registration of the Shorthair.

Bussey’s unique standards on breeding had bought a more ethical approach to cross-breeding. The outcome of her campaign was intended to register this new breed known as Exotic Shorthair.

The initial crosses were between the Burmese and the Persians with American Shorthair. Later, the Exotic has been limited to cross with the Persians to maintain a pedigree status of the breed.

Moreover, crossbreeding has not been a part of the Exotic breeding program since 1975. Some cats were imported from overseas or bred at other zoos to ensure that these attractive cats were produced to meet the breed standard.

Exotic Shorthair breed was granted Championship Status in 1967 by the Cat Fanciers Association (CFA). With this, the breed made rapid progress and was soon in demand.

The first Exotic Shorthair achieved the status of Grand Champion in 1971 and became the CFA’s cat of the year in 1991.

Here are the important physical attributes of an Exotic Shorthair.

This cat breed was previously more active than its Persian relatives. It was because of the outcrossing for the short hair gene. Nevertheless, since the breed began, the Exotics resembles more than Persian in behavior and appearance.

It is also more playful than the Persian cats. Because of their easygoing and calm attitude, these cats are ideal for families both with or without children. They are also suitable for both rural and urban homes.

Furthermore, Exotics are friendly with other pets and strangers. It usually greets their owners with a soft voice when they arrive and makes them feel welcome by curling up on their lap.

These cats are also amused by the simple adventures of life. A paper ball or string can keep them busy and pleased. However, they are jumpers, nor do they roam around the house and make trouble on shelves. Generally, they prefer to lounge around and be caressed.

They also like to sleep in their owner’s bed and do not mind any changes in the routine. Such exceptional qualities make them the most loyal and affectionate pet companion. This makes them ideal for being an emotional support cat also.

Unlike Persians, Exotic Shorthair cat breeds are easier to groom. Here are some of the ways with which you can groom this cat.

This cat breed happily lives anywhere with its parents. It is because they are only focused on their owners and not concerned about the environment. They usually do not require a lot of space and will be happy living even in an apartment. On the other side, this breed is also perfect for both urban homes and country living.

Moreover, these cats can easily develop separation anxiety, so provide them with a kitty partner if you travel a lot. They love to have a padded window seat where they can spy on the outside world.

Remember, this breed is brachycephalic and may experience trouble while breathing and regulating its body temperature. Thus, it is crucial to keep them cool in a warm climate. For this, the breed looks for places they can cool down, such as bricks, tiles, and uncarpeted floors.

Typically, the cat’s diet depends on its sex, age, size, and activity levels. Nevertheless, the owners are required to control the nutrition of this cat because the breed is not known for a high degree of exercise. Thus, overfeeding the cat can lead to obesity that is itself a host to various health issues.

Make sure to feed the cat a balanced and healthy diet and give treats in moderation. The best food for your Exotic Shorthair must include:

Exotics have lower energy levels and prefer to lounge and cuddle with their owners. However, they need proper exercise daily to keep themselves in good condition. They are playful and usually like to play with their parents. Similarly, they can entertain themselves pretty well and enjoy playing with interactive toys, chase balls, and attack catnip mice.

This Exotic Shorthair can be easily trained with normal tasks. It may include using a litter tray, coming when called, or accepting a harness and leash. Nevertheless, they are not active and may often be reluctant to learn other tricks.

When you bring your cat home, keep them in a small room, to begin with, the training. New things should be taught with the help of a few tasty treats. Attract them to come towards you with food. This is how they will learn tricks easily and quickly.

Authentic cat breeders take enough steps to ensure that they are producing healthy cats. However, an Exotic Shorthair may develop a health condition at some point in her life. Thus, it is essential to know the symptoms and signs of the diseases that are common in this breed.

Some health problems that are very common among Exotic Shorthairs are as follows:

One should expect to pay almost $550 and $1000 to the breeders offering Exotic Shorthair kittens for sale. On the other hand, common pedigree Exotic Shorthair prices range from $1200 to $2200.

The cat with limited registration can cost between $850 – $1800, which is reasonable. However, the cost can fluctuate greatly based on the breeders, lineage, and pedigree.

Other expenses include the following:

Therefore, the best option is to adopt a cat from Exotic Shorthair rescue groups and shelters.

The following are some interesting facts about the Exotic Shorthair cat breed.

Can an Exotic Shorthair Qualify for an Emotional Support Animal?

The answer is yes! The Exotic Shorthair cat breed is a favorite family pet, especially for children and senior citizens. Similarly, the sweet and loving personality makes it a perfect emotional support animal.

They are extremely attached to humans and love to cuddle with their owners. Thus, they are considered ideal lap cats. Ensure to buy or adopt this cat from a reputable Exotic Shorthair breeder. All you have to do is contact a professional mental health provider and get a valid ESA letter in no time.

This prescription allows a mentally and emotionally unstable individual to live and travel with his pet cat. Thus, if you need an authentic letter, contact us at RealESALetter.com. We will provide you with a professionally written letter within 24 hours. Remember, with us; you don’t have to pay any extra charges.

Why are exotic shorthair cats so expensive?

Exotic Shorthairs are usually expensive because a precise breeding method is used to develop this cat. Moreover, large knowledge, resources, and experience are also needed to create this breed.

No, Exotic Shorthairs are not hypoallergenic because they have short hair which makes them less allergenic than Persian cats.

The Exotic Shorthair cat has a low-maintenance coat that does not shed much. Thus, it only requires weekly brushing.