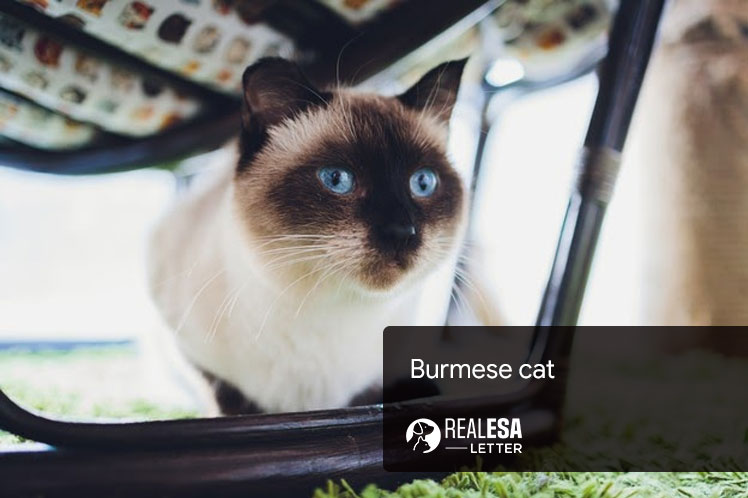 A Burmese cat is a domestic cat with a substantial and muscular bone structure. This cat breed has a surprising weight for its size. The amazing color shading and pattern make it stand out from other cat breeds.

These cats are devoted and can be really entertaining because of which they make great pets. Burmese cats are an extrovert breed that is uniquely social and famous for their beauty.

Continue reading the article to learn about its origin, personal attributes, temperament, and interesting facts. If you are getting a Burmese breed, this guide will be really helpful.

Burmese cats share a very rich and interesting history. This domestic cat breed has its roots in the Thai-Burma border; however, they were developed in Britain and the United States.

In 1930, Dr. Joseph Thompson imported a brown female cat named Wong Mau to the United States from Burma. It was a small, fine-boned cat with a walnut-brown coat fur on the body. When every other person thought this cat to be a Siamese, Dr. Thompson, along with other breeders, believed that it was a different breed.

Dr. Thompson was in Tibet when he first saw this short-haired dark brown cat. He was deeply inspired by the beauty and personality of this cat breed. To study the breed’s characteristics, Dr. took Wong Mau to America.

With the help of a geneticist, Dr. Clyde E. Keeler, Dr. Thompson conducted the study of the breed. Wong Mau was crossed with a seal point Siamese, and as a result, beige, sable brown color, and pointed pattern kittens were developed.

In this process of breeding, Dr. Thompson discovered that Wong Mau was half Siamese and half Burmese, which we call a Tonkinese today. In 936, Burmese were registered with the Cat Fanciers’ Association (CFA) and gained popularity.

In Britain, the new British breeding program was reviving the interest of the breeders, and by 1952, almost three generations of Burmese cats were produced.

If we look at it today, the actual look of the Burmese cat has changed. Originally, these cats were dark or solid brown in color. Now, these cats can be seen in a variety of colors. In addition, the previous and the current breed have different temperaments and social behaviors.

Burmese cats are amusing, playful, super-intelligent, and an interactive breed. These devoted cats are loyal and people-oriented, which means that if you are looking for affection, they can be the best companions.

Burmese have a childish nature that can be entertaining for people of any age. These cats behave similarly when they are of 16 years of age like they behaved when they were 1. They need your full attention when performing animated antics, and make sure that they won’t go unnoticed.

This amazingly playful and entertaining breed is eye candy that can win any person’s heart. However, their temperament can differ from gender to gender and according to age. For example, female Burmese cats are more sensitive, highly intelligent, curious, and deeply in love with their humans.

On the other hand, males are a bit more moderate and cautious. They are only passionate about their favorite food items and when they will be served. Moreover, they are social but tend to be more comfortable around Burmese siblings instead of other animals.

Unlike other cat breeds, especially Siamese cats, Burmese are not very vocal or talkative. They will only interact with you when they want to express something or need your attention. However, their voice is sweet and will not poke you in any way.

As they are the people’s cats, they should not be left alone for a longer period of time as it can be dangerous for their mental health.

The previous and prevailing Burmese cats have a little difference in their appearances as well. In addition to this, even the same cats that were developed in two different countries have distinctive appearances.

Burmese can are not only known for their beauty, intelligence, and personality. These mysterious creatures are more than just good looks. Their existence has a special place in a cat world.

Apart from the interesting origin, Burmese cats have fascinating things about them that are not commonly known.

Being around this cat breed is something that every person would want. These remarkable furry creatures have so much to share with their families that they are more than just cats for them.

Whether you are a proud owner of it or just an admirer of a Burmese cat breed, one fact that you should be knowing is that they can be the most loyal and happy breeds that will lighten up the whole environment.

If you want to get a Burmese cat, contact a reliable breeder. For getting it for emotional support purposes, you will be needing an ESA letter from a mental health professional stating why you need its companionship.

Otherwise, if getting it just as a pet, there are breeding and adoption centers, pet stores, and rescue houses that can provide you with Burmese cats.

These good-looking, charming, and intelligent cats are all you are looking for to get your complicated life together.

Do Burmese cats shed a lot?

No, Burmese cats do not shed a lot. Due to their short and clean coat, the shedding is not excessive. Proper brushing once a week is enough for them to get rid of dead hair of the coat for this cat breed.

Is a Burmese cat hypoallergenic?

Burmese cats are hypoallergenic. Unlike other cat breeds, they have a special trait named “glistening” that makes the coat fur shining and exquisite.

Burmese are amazing indoor cats. These cats enjoy playing and spending time indoors with their families. They are very trusting even with strangers, so keeping them outdoor will not be a good option.

Can Burmese cats be left alone?

Burmese cats do not like being left alone. They are people’s animals and like being with their owners or families all the time. They crave your attention, and if not given, they are not very accepting about it.

Burmese cats will scratch your furniture if not provided with a scratching post. They like climbing, and their sharped claws can damage the furniture easily. Regularly trim your cat’s nails to make sure they do not scratch other people or get hurt themselves.

How much do Burmese cats cost?