Home » Blog » Are Dogs Color Blind? Know All About Color Blindness in Dogs 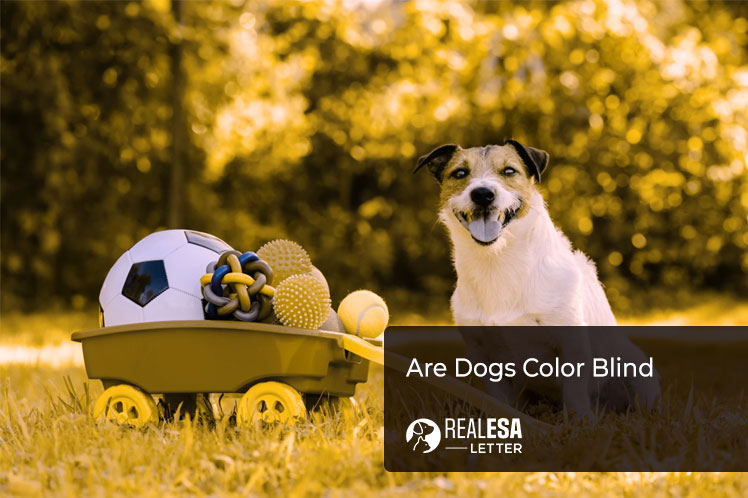 Do you know that dogs are not actually color blind? There are several myths, stories, and facts related to dogs and their inability to see colors.

Some common queries are ‘do dogs really see everything in black and white?’, ‘can my dog see colors?’ and the most famous one, ‘are dogs color blind?’

For many years, it was believed that dogs see in black and white. However, recent research shows that even though dogs can not see colors as humans do, they still see certain colors.

Continue reading the blog to learn more about the ‘color blindness’ in dogs and the colors they could actually see.

What is Color Blindness?

Color blindness is a unique vision condition that prevents a person or animal from identifying and differentiating between certain colors. This genetic condition is caused when the light-sensitive cells and receptors, named rods and cones, found in the retina of the eyes, respond differently to specific colors.

The type of color blindness that a person has depends on the color receptors that are affected. For example, a person with blue-yellow color blindness will not be able to differentiate between the two colors.

The symptoms of these conditions are not as obvious as those of other conditions. Usually, parents observe that there is a problem in a child’s vision at an early age.

In other cases, those symptoms are so casual that they can not be noticed by people. Some common symptoms include:

Color blindness has no known treatment as yet. However, there are contact lenses available that help a person cope with color deficiencies.

Color Blindness in Dogs - What are the Reasons Behind It?

Understanding how the eyes work is essential when learning about color blindness in dogs. The eyes function on the basis of specialized cells and receptors called rods and cones. Rods detect the motion of light while the cones control the color perception.

A human eye has three types of cones, while a dog has only two. It means that dogs see only two colors, including yellow and blue only. Unlike humans, who can generally see and distinguish between bright red, blue, green, and other colors, dogs could see two colors only.

The dog’s vision, therefore, is called dichromatic. Unlike the common and widespread myth, dogs do not see the world in the shades of black and white. They can see and perceive some colors, especially blue and yellow, but they perceive it differently than humans.

Due to dichromatic vision, dogs perfectly see and distinguish between two colors and their variations. In their case, these colors are blue and yellow.

What Colors Can Dogs See?

Are dogs really color blind or only spectrum challenged? For years, researchers have been studying and conducting experiments to understand how the canine eye works. It is through these studies that experts concluded that dogs have night vision.

Unlike humans, dogs have more rods in their retinas, which helps them see in dim light also. However, having more rods does not make the color spectrum larger for them. They still see two colors only.

It is due to the fact that color perception is based on both rods and cones. Dogs dominantly see yellow, blue, and their relevant shades and tones. They easily distinguish between blue, blue-green, and violet.

As per the research conducted by Jay Neiz from Neitz Color Vision Lab, the dogs’ vision works the same as the vision of a human with red-green color blindness.

Any canine lover would feel sad about it but, dogs make up for their limited color identification quality with other skills. Dogs have a remarkable sense of smell and hearing.

The Black and White Vision Theory - What is it?

If dogs could see two primary colors, then how did everyone perceive that canines have a black and white vision? The theory was given by Will Judy, the founder of the National Dog Week, who believed that dogs see the world in black and white only.

Later in the 1960s, researchers wrongly stated that only primates could perceive and identify different colors.

In 2013, Russian researchers challenged this belief. They argued that dogs could see yellow and blue hues and conducted an experiment to prove their point.

They placed four pieces of paper, all of the different colors, on four feed boxes. The one with dark yellow paper had a piece of meat or food in it. Later, when the dogs learned about associating the yellow paper with food, the researchers placed food in the box having blue paper.

They concluded that if the dogs went for the blue paper, then it is because of food. Surprisingly, they went for yellow paper, proving that it was the color rather than food.

What Does This Mean for You and Coco & What Should be Done?

Now that you know what colors your dog can see, you can choose their products accordingly. Get them toys with colors they can identify and can react to. There is a reason why certain dogs react happily and go crazy seeing a specified color object as they recognize.

‘The most popular colors for dog toys today are red or orange. However, red and orange are difficult for dogs to see. That means that when your own pet version of Lassie runs right past the toy that you tossed, she may not be stubborn or stupid. It may be your fault for choosing a toy with a color that is hard to discriminate from the green grass of your lawn.’

Since dogs could not perceive orange, red, and green colors, getting toys of this color would not do them any good. For greater benefit and better training, you should get your dog’s toys in yellow and blue colors.

Moreover, when training your dog or playing with them, use objects that they easily differentiate in terms of colors. It will be easier for them as well as for you.